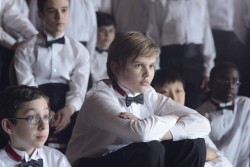 Director François Girard’s best films have revolved around music: Thirty Two Short Films About Glenn Gould propelled him to early critical fame and The Red Violin proved to be a popular success. With Boychoir he’s back in his element with a touching, crowd-pleaser that percolates with choral music.

He’s able to put flesh on the screen despite the brittle bones of the plot.

“Music is a reminder of our own potential for perfection.”
-- Seymour Bernstein

In last September’s issue of The WholeNote, in my preview of the Toronto International Film Festival, I wrote that the film I was most looking forward to was Ethan Hawke’s Seymour: An Introduction. It had been Hawke’s explanation of Bernstein’s teaching mantra (responding to Hubert Vigilia’s question on flixist.com, two years ago just as the film was taking shape) that piqued my curiosity and made the film a must on my TIFF to-do list.

Said Hawke: “He’s a very deep guy. I was touched by him, and I thought he had a lot to teach me about acting, and then I slowly realized that the way he’s talking about the piano relates to every profession.”

I was touched, charmed and inspired by Hawke’s moving documentary when I saw it at TIFF and couldn’t wait to see it again. Six months later, it’s begun an exclusive engagement at the Cineplex Varsity Cinemas. The second time I was even more moved. Be prepared to be charmed and inspired when you see it. It’s unmissable.

Hawke (Boyhood, Before Sunrise, Before Sunset, Before Midnight) has given us a tender, warm portrait of the captivating pianist Seymour Bernstein. Among many things Hawke’s documentary does, it debunks the axiom that those who can, do and those who can’t, teach. And it does so with wall-to-wall piano music highlighted by Bernstein’s own playing of Chopin (Berceuse, Ballade No.1, Nocturne Op.37 No.2) and Beethoven (Bagatelles Op.126, Sonata Op.111, “Moonlight” Sonata) among others, as well as some of his own compositions.

The Toronto Symphony’s New Creations Festival is turning out to be a remarkable blend between premieres of works not heard in Canada before, including two newly commissioned pieces and an experience of breaktaking performances by Canadian soprano Barbara Hannigan who was featured in the February issue of The WholeNote. With one show of the festival remaining on Saturday March 7 and the entire night devoted to a concert version of guest composer George Benjamin’s opera Written on Skin, all I can say is if you’re reading this before Saturday, you need not even think twice. It’s going to be spellbinding.

But before jumping ahead into the future, a look back at what has already transpired is in order. The two works that stood out for me at the February 28 concert were both devoted to studies of “a mind of winter,” which just happens to be the title of the work composed by Benjamin and performed by Hannigan that evening. As soon as the conductor’s baton was raised, from my close vantage point I could see Hannigan immediately begin to breathe into and with the sounds coming from the orchestra. I remembered what she had said in the interview we had for the February cover story – that when she sings she becomes fully a part of a large body making sound and breathing. She went on to say “that’s what makes singers so unique – because the voice is the most vulnerable of instruments, when you are connected with your whole body, your whole being is on display.” She so fully took the audience into this mind of winter state, that listening to the music lifted the listener far beyond the drudgery of winter into a place of stillness and exquisite beauty. 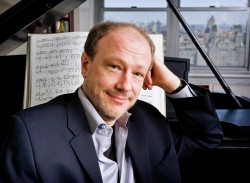 David Perlman talks with Jamie Parker about his work with Music Toronto, the Gryphon Trio and what it's like being a pianist, a professor and a Parker.

To hear the full conversation with Jamie Parker click the play button below. For any of our other podcasts, search for “The WholeNote” in your favourite podcast app, or go to TheWholeNote.com/podcasts for the entire list. 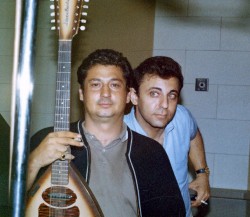 Thirty years after they were the bricks in Phil Spector’s wall of sound, guitarist Tommy Tedesco, drummer Hal Blaine, bassist Carol Kaye and saxophonist Plas Johnson sat down to reminisce about their lives as L.A. session musicians for some of the most famous voices in the history of popular music. Those unforgettable guitar licks in Bonanza, Batman and Green Acres? That was Tedesco. The highly sought-after Kaye was the rare female in a man’s world. Her totally original bass line in The Beat Goes On is an example of why. “Nobody thought the music we cut in the 60s would last ten years,” she said.

Read more: Music and the Movies: The Wrecking Crew

Three compelling films have recently surfaced in Toronto., Timbuktu, Abderrahmane Sissako’s clear-eyed, moving, humanistic look at the jihadist takeover of northern Mali is in an exclusive engagement at TIFF Bell Lightbox as of February 13. Sissako brings us wholly into the lives of his well-developed characters, ordinary people who want nothing more than to make music, play soccer and, for the women, to feel the breeze on their hands without being forced to wear gloves at all times. All of these simple acts have been declared to be violations of Sharia law by thuggish Arab invaders.

David Perlman talks with Suzie LeBlanc (Soprano) about her Acadian Christmas album and her other projects.

To hear the full conversation with Daniel Taylor click the play button below. For any of our other podcasts, search for “The WholeNote” in your favourite podcast app, or go to TheWholeNote.com/podcasts for the entire list.

David Perlman talks with Angela Hewitt about her upcoming performances, programming her annual festival and her vision of years to come.

To hear the full conversation with Angela Hewitt click the play button below. For any of our other podcasts, search for “The WholeNote” in your favourite podcast app, or go to TheWholeNote.com/podcasts for the entire list. 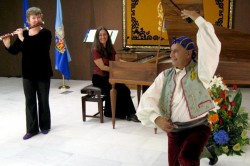