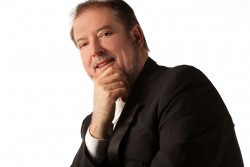 The Op.110 sonata moved delicately into the main theme's weight. The second movement Scherzo was clear and deliberate as it shifted organically into its more spiritual realm. The fugue that followed was like a voyage through a rolling sea; its shape pre-eminent, logically proposed and realized. A whisper of regret or sadness preceded the return of the fugal theme, seemingly drenched in a golden light illuminated by the composer's humanism. The large crowd greeted its conclusion warmly.

Scriabin occupied the evening's second half beginning with the exquisite, all-too-brief Désir, Op.57, No.1, which Ohlsson played sensually, perfectly embodying the longing implicit in its title. The pianist then took the mic for a colourful mini-lecture on the composer who was born on Christmas and died on Easter and believed in revolution through art. Ohlsson spoke of his synesthesia (the ability to see colours in music), his childhood obsession with Chopin that led him to sleep with Chopin's sheet music under his pillow, and how his musical language evolved over his lifetime. A theosophist, he wrote his Mysterium to be performed at the foot of the Himalayas, its opening to be announced by bells hanging from clouds. The piece was unfinished at the time of his death from blood poisoning at the age of 43.

Ohlsson then performed Sonata No. 10, Op.70, brilliantly conveying its cascading amorphous shapes, gorgeous tone clusters heralded by pointillistic “ad libs.” Two etudes followed: Op.42, No.1 began in a Chopin vein before expanding its language and colouristic palette; Op.42, No.5 was more angular and complex. Ohlsson's tone was much rounder in the Scriabin than in the Beethoven, his six-foot-four-inch frame capable of delivering everything Scriabin demanded.

The final piece on the program, Scriabin's Sonata No.5, Op. 53, was an extraordinary pianistic showcase – delicate, enlightening, impulsive – that soared to ecstatic heights; moments of repose and reflection, abundantly melodic, surrounded abrasive chordal fortes. Rapturous playing that set off a well-deserved standing ovation.