Here we are at December, with all of the closures and quarantines having pretty well confined most musical groups to such measures as Zoom sessions. We even hear that Christmas will be delayed until some time in January, so Santa can quarantine for two weeks. So, with time on my hands, and since December happens to be my birth month, I decided to do a bit of reminiscing instead.

My plan was to start by referring to a band photograph I’ve been looking at from time to time for the past many months. Of course when I actually went to get it to refer to it, Murphy’s Law prevailed. It has disappeared and is not likely to reappear until this column has arrived at the printer. Ergo, rely on memory.

My band days began in Windsor when two school pals told me about the band that they played in. Jimmy Rees (cornet) and Keith Finney (tuba) took me to a rehearsal and introduced me to Mr. Arthur Laley, bandmaster of the High Twelve Boys Band, an all-brass band in the British tradition. As the name implies, the band was sponsored by the local High Twelve Club – High Twelve being an organization of Master Masons placing a special emphasis on youth support, and so-named because, long ago, noon was known as “high twelve” and the time to call off from labour for lunch.

The band owned all its the instruments, so there would be no significant financial problems for me. Having been given a small toy drum some years earlier, I mentioned that I would like to play drums. Mr. Laley diplomatically informed me that the band did not have an opening for a drummer at that time. He suggested that he could both provide a baritone horn and that he could teach me how to play it. Thus began a lifelong interest in brass instruments.

Most young bands at that time were “Boys Bands”. However, at High Twelve there was a difference. Two of Mr. Laley’s three children were girls. One was the lead cornet, the other was the lead trombone and the son was the lead euphonium. In addition to the weekly band rehearsals, there were sectional rehearsals in Mr. Laley’s basement on other nights. Our summer months were busy too  –. with parades, small tattoos and competitions in various towns in Southern Ontario, to which we were usually fortunate to have a sufficient number of interested parents to drive us.

As we sit in anticipation of small white crystals on our lawns, rather than those colourful bright leaves, we have to realize that our community music is going to be very different this year than the rehearsals and concerts we have been accustomed to. While the social aspects of community music have almost entirely disappeared, along with the leaves, with so many advances in digital technology we are seeing amazing adaptations across the musical spectrum.

In last month’s issue of this column I mentioned that New Horizons Band of Toronto, in collaboration with Resa’s Pieces, would be working with Long and McQuade Music for a “Tech Talk Workshop.” Other than the fact that the venture was to consist of a few online Zoom sessions of advice from specialists at L & M, details were rather sketchy at the time. Since I was not able to participate in the first of these in order to find out more for myself, I asked Randy Kligerman from New Horizons what sparked the idea and how the first session worked out. 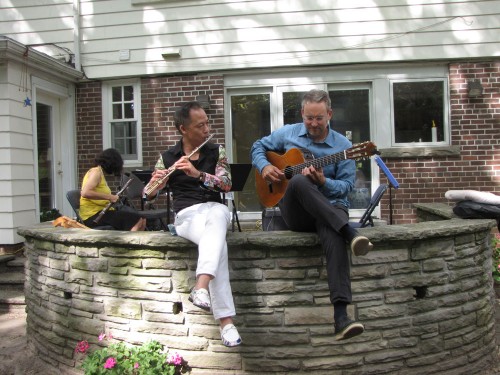