Beware the Ides of March! Thus spoke the soothsayer as he, correctly, warned Julius Caesar of his impending doom. While “impending doom” is probably not the cause, we haven’t heard much of anything from our current band world about any activities planned for the month of March of this year, at least not in time to report on here. On the bright side, while waiting for information on coming band activities, I had time to check on the meaning of the Ides of March. While the term originally referred to the full moon, in ancient Rome it was the time for several religious observances and was also a deadline for settling debts. It is the word “deadline”, particularly, that caught my eye. In fairness to bands in our part of the world, it may be that the month of March may be one of preparation, but not performance. In a few cases, notices we receive, about concerts that have been in the works for months, arrive only a few days before the event. For us to mention an event we must receive any notice no later than the 15th of the month prior to the event. Be aware of the Ides of March (Sunday March 15) is therefore my message this month. Send me your April concert listings by then and I will be sure to make mention of them here. 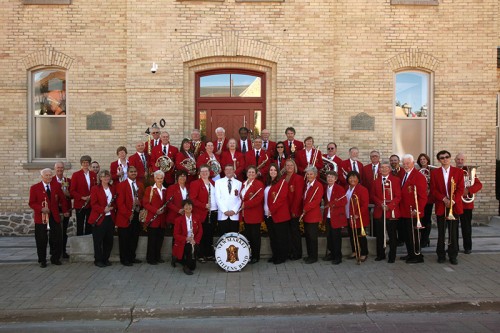 Behind the Scenes
As many of you know full well, keeping a concert band going requires a few activities other than concert preparation and performances. These include library updating, financial matters and executive elections among others. As I think about such non-performance activities, a few stand out. Obviously a well-organized and well-catalogued library tops the list. There isn’t space here to detail the many possible formats, but with most bands having access to computers, a spreadsheet where searches may be easily done based on title, composer, library catalogue number, style etc. is easy to create and maintain! A few bands I know have a numbering system for all selections in their libraries, but others just stick to names. I’m a big proponent of a numbering system. When the conductor calls out a number to rehearse, everyone knows what to get. If the conductor should call for a selection such as Pop and Rock Legends: Elton John, and filing is alphabetical, one might look for Pop, Rock or Elton John. Numbering all of the charts would eliminate any confusion. Years ago I played with someone who filed any chart with a name starting with The under the letter T.

Another activity, sadly lacking in many musical organizations, is some form of band archives including photos, programs, videos, movies etc. How many bands have reliable, accurate, safely stored archives along with their libraries? Disasters can happen, as they did many years ago when arsonists destroyed the building where the Newmarket Citizens Band rehearsed and stored their music. Fortunately, music which had been stored in steel cabinets was salvageable.

One other, much more challenging, means of recording a band’s history and events could be to produce a movie of the band’s activities. In 1971 Canada’s National Film Board produced a film called Goodbye Sousa. Released in 1973, the film profiles “the Newmarket Citizens Band, one of Canada’s oldest marching bands.” This won the Canadian Film Award for best theatrical short film at the 25th Canadian Film Awards. In the words of the band’s current executive, however: “It won awards but did not present a positive view about the band’s relevance in the community. That’s why we feel a response is long overdue ...by almost 50 years.” So, now, in 2020, the Newmarket Citizens Band is on the verge of producing a new film of community band activities. Band members have already received release forms for their agreement “for appearance in a documentary.”

For those who might wish to view the original movie, there is a link to the video on the band’s website: newmarketcitizensband.ca.

Rants
Every once in a while I feel compelled to voice some concerns about matters in the community band world. This month’s rants may well apply to almost any organization presenting concerts or other events. The first concern has to do with event location. In recent months I have received a number of flyers which state the name of the venue but not the location. For example: one might advertise a concert at St. John’s Church. The obvious questions would be which St. John’s Church, and what is the address? My other concern is more for archival purposes. Many programs just indicate month and day. This is fine at the time, but not if one wants to check on what a group might have performed some time previously. It is nice to know what year.

Expanded Horizons
It seems as though it was just a short while ago when I first learned about the establishment in the Toronto area of a New Horizons Band. How time flies. It was in early 2010, when Dan Kapp told me that he was forming such a group in Toronto. I had heard of the organization, but really didn’t know much about it. For those who don’t know about the organization, its role is to engage people from two categories. Those who either always wanted to play a musical instrument, but never got around to it, and those who had played many years previously, but such matters as jobs, marriage and children took priority.

One day, in a conversation with Dan, he mentioned that his very first performance with this new group was coming up, and he needed someone to play trombone. I agreed to sit in, presuming that this modest new startup beginners’ band would be performing in a local school or church. Not so. Dan had booked the CBC’s Glenn Gould Studio. I was to be playing beside another sub trombone player. Then, a day before the concert that sub became ill. What to do? Looking across the dinner table, I quietly mentioned to the lady of the house “you’re it.” Since she is a retired music teacher I knew that she could handle the trombone parts she would encounter. Since this was a beginners’ band, I was sure that there would only be a small audience of family and friends. Not so. To my amazement, the place was almost full. New Horizons Toronto was on its way.

In the early days, Dan Kapp was the conductor and do-it-all organizer. Before retiring (for the second time) and moving to Wolfville, Nova Scotia, Dan aided in the establishment of a committee to deal with the challenges of a much larger organization. A committee was formed. Randy Kligerman, one of the members of the very first band, is now president of the New Horizons Band of Toronto.

To get an update on New Horizons, I called Kligerman and he gave me a few basic statistics. When New Horizons Band of Toronto began teaching adults how to play concert instruments, it had one class of 17 people. Now in its tenth year, NHBT has grown to 260 members participating in nine concert bands, three jazz bands and two theory classes! “Our growth came with certain challenges,” says Kligerman. In the beginning the band rehearsed in a hall over the Long and McQuade store on Bloor Street. When they outgrew that space, they moved to a nearby Salvation Army location. After a few years their requirements outgrew that location too. Finding suitable practise space in Toronto on the subway line is difficult enough, but the fact that they run day and evening classes from Monday to Friday, made things much more complicated.

After a year of searching, NHBT now hangs their sign at 662 Victoria Park Avenue just north of Danforth Avenue. “The space is made to measure” says Kligerman, “Our band room is bright and clean, and easily accommodates our largest band of 55 members.  The NHBT office is large enough to store instruments, our music library, a desk for our directors, and a board room table for members to sit and chat over a cup of coffee.

As mentioned, New Horizons Band of Toronto provides adults who have no musical experience, and also those who once played in school but have since been inactive, with the opportunity to learn or improve their skills in a non-competitive, friendly classroom setting led by highly accomplished music directors. “Everyone has musical potential,” says Kligerman, “and playing music, no matter the level, enriches your life intellectually and socially and is a lot of fun.” In addition to occasional performances throughout the year, NHBT have two special annual events. The first is their “Chamber Suites 2020” where a variety of small ensembles perform for each other’s entertainment. Then all of the groups will be performing their year-end concert, on May 29 at the Toronto Pavilion, where they will be celebrating their tenth anniversary. You can learn more about New Horizons Band of Toronto on their website: newhorizonsbandtoronto.ca. 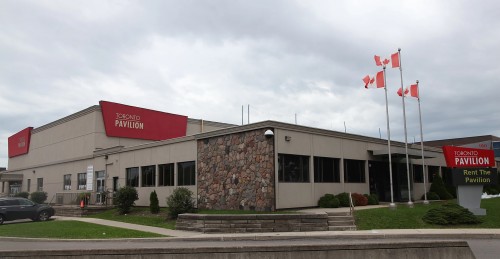 Until I received word of this annual concert, by the way, I had never heard of the Toronto Pavilion. Since I have frequently commented on performance venues, I wanted to learn more. It is located at 190 Railside Drive, south of Lawrence Avenue just east of the Don Valley Parkway. With a large stage, seating capacity of 1,100 and with 200 parking spaces available, it is worth checking out.

Silverthorn
A few hours before sitting down to finish writing this column I had the pleasure of attending a concert by Silverthorn Symphonic Winds. As usual, director Andrew Chung treated us to an excellent program including the Overture to Verdi’s Nabucco, Holst’s Moorside Suite, Dello Joio’s Scenes from the Louvre, the Overture to Rossini’s An Italian in Algiers, and Morley Calvert’s Suite on Canadian Folk Songs. Unfortunately a disruption totally beyond the band’s control arose. As the band performed, we could hear unwanted sounds from the floor below the concert hall. The room had been rented out to a large party with non-stop, super-loud rock music booming from the DJ’s sound system. It was the first time that I had ever heard Calvert’s She’s Like the Swallow with rock band bass accompaniment. Kudos to the unflappable Andrew Chung who did a remarkable job of producing an excellent evening of music.