Starting with question one, we have received some news from a few bands, but mostly it has been silent hope for better days to come.

The first good news came from Steffan Brunette, director of the Uxbridge Community Concert Band. As was mentioned in last month’s Bandstand, members of the UCCB produced an excellent performance of Nimrod from Elgar’s Enigma Variations with no rehearsals or concerts and with all members playing at home. This summer should have been the Uxbridge Community Concert Band’s 28th season, and as a summer-only group, the membership drive for the season usually begins in February and March. However, the encroaching sense of worry around COVID-19 meant that the band’s executive was simultaneously working on plans A and B and plan C, the worst case scenario. This simply was to accept the fact that the summer season would be cancelled.

Brunette, however, was not ready to give up. Instead, he really expanded his boundaries.

In May, with physical rehearsals already impossible, thoughts turned to how the band’s membership could maintain some ability to make music. As he said: “Our community musicians come to community bands for various reasons, but most are there for the social aspect, and to feel the reward of contributing to the group’s artistic goals. Depending on the individual’s musical expertise, there might be a desire for personal improvement, or to explore new repertoire. We wanted to find a way to get our membership involved in a musical project that brought them some of the satisfaction of the regular season.”

His solution? UCCB had already, as mentioned earlier, produced an excellent version of Nimrod a few months earlier. Why not invite members of other bands to join in for another recording? Accordingly, he has extended an invitation to community musicians in the surrounding area to participate in a free online “virtual band”project over a period of a few weeks. The selected composition for this project is Fields of Honour, by Canadian composer William A. Mighton. As Brunette said, “Because borders are no longer an issue, the UCCB sent out invitations to neighbouring community bands in Port Perry, Newmarket, Markham, Whitby and Pickering. We are happy to be playing along with musicians from further afield.”

Nobody in the band world is being precocious enough to predict a date when band rehearsals and concerts might return to normal. In the meantime, if regular rehearsals can’t be resumed, what are the alternatives? Perhaps, as Stefan Brunette’s UCCB has done, individual community bands will offer to host virtual performances of one or two pieces at a time, allowing musicians from a wider geographical range to sign up and participate. The first goal should be to keep our community music alive, performing and growing.

Since most bands and band members are not familiar with online recording techniques, I decided to speak to Steffan Brunette regarding his experiences during UCCB’s two projects to date during COVID-19, and have included a few of his useful comments here:

First is his point that while most online virtual ensembles usually feature highly experienced musicians comfortable learning and performing their parts individually. In a community band, such as the non-auditioned UCCB, some players learn their parts by imitating players in their vicinity. Over the course of several rehearsals, this kind of rote learning allows such a player to learn enough to participate in the concert. So before making a virtual recording UCCB had to think of a way that allowed musicians whose reading skills were lower to still feel they were a part of the band, and to allow the entire group to have a sense they were playing with others.

Second, a lot of online projects use  a foundational track upon which other elements are layered, in most cases, some kind of click track, or an actual drum track. In pieces without a steady tempo, though, or with changeable tempo, the foundation needs to be a visual one. For UCCBs first online recording of Nimrod they recorded a silent conductor video, prefaced with tuning pitches. Players were given two weeks to perform their parts aligned with the conductor video. These phase one recordings were adjusted as necessary to ensure that they all landed on the necessary beats, making for a rather ugly first recording, with gaps in certain tracks to force matches to the conductor. As Brunette says, wryly:  “If only such a tool could be used for live performances too!” The Phase one track, with all parts aligned, was sent back, mixed and as single parts, to the players (along with feedback for individuals who needed assistance with various passages). They were asked to resubmit a recording while playing along with the phase one background on their headphones. Now all players could finally perform with the band, with no one left out!

Just as I was about to put this month’s Bandstand to bed, I heard from Susan Baskin to tell me that “something nice had happened”. The Virtual Band Performance that her North York New Horizons group created was posted on the New Horizons Music International website. You can find the international site at newhorizonsmusic.org, and Baskin's North York Band website is at newhorizonsmusicnorthyork.ca. 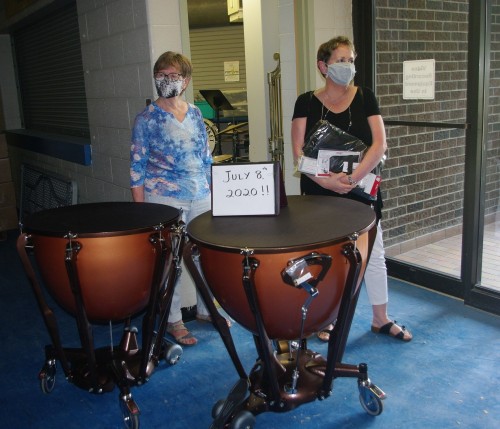 These kinds of conscientious approach to virtual performance could certainly alleviate some of the dismay, but one major component of being a regular member of any band is the social component. While many groups have some members gathering occasionally with various forms of Zoom sessions, the true face-to-face social component is missing. No form of fancy technology is going to replace that socializing.

So, what can bands do to keep some kind of cohesion and camaraderie? As the executive of the Newmarket Citizens Band put it: “The business of running a community band continues even during a global pandemic.” Recently they announced more than one event to celebrate.

The first was the arrival of new timpani to replace the band’s timpani which had been in service for some 60 years. On July 8, president Connie Learn, vice-president Linda Guenther and percussionist Lawrence Moule took delivery of their new set of Ludwig timpani, with a brief ceremony on arrival, after which they were then installed in the NCB’s storage space – thanks to the staff at Newmarket’s Department of Recreation and Culture! Certainly something to look forward to: the first time the new timps see active service.

As if that wasn’t enough, in 2022, the Newmarket Citizens Band will be celebrating their 150th Anniversary as the oldest continuously operating community band in Canada. The local newspaper, the Newmarket Era, recently published a front-page article featuring the band, their history and their plans to commemorate this very important milestone. While COVID-19 has temporarily curtailed their rehearsal and concert activities, they have four anniversary projects on the go. As explained in the article, they are looking for photos, memorabilia, artifacts and family and community connections to help tell their story. To see that article go to:

Over the years, the name Graf has been mentioned many times in this column. Musician, bandleader and arranger Eddie Graf, who passed away in 2017, his wife Bernice (“Bunny”) and his son Lenny Graf have all been mentioned many times. As I wrote in the October 2018 issue of The WholeNote, Eddie Graf married Bernice O’Donnell at 9am on New Year’s Day 1945. Eddie had been the leader of an Army Show band, and Bunny had been a singer and dancer with the band.

They had chosen to be married “at the earliest hour on the first day of a new year when the promise of a long life filled with joy and happiness was strongest.” It is with heavy heart that we report that Bunny passed away peacefully in her sleep, on Saturday, May 2, 2020 at Sunnybrook Veterans long term care.