Of the bands that we have heard from, one stands out. Members of Resa’s Pieces Concert Band have been receiving an amazing array of messages on coping. I know of at least nine messages covering many basic practice recommendations. The primary recommendation simply states that, if one loves music as much as they claim, they should utilize this time to improve their playing. In other words take advantage of this time to practise because, as the Oxford dictionary defines practice, it is “repeated exercise to improve skill” and there is certainly enough time for that right now.

As for practice techniques, most of us, at some time, learned all of the basics that Resa Kochberg covers in her emails. Her main topics for all instrumentalists practising at home: Playing Position; Breathing Techniques; Articulation; Long Tones; Intonation; and Playing in Tune. 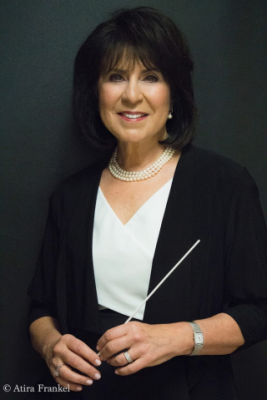 In her final memo she states: “Many great performances have been compromised by poor intonation. Tuning is so important in music because in order for the audience to enjoy listening to your music, you have to be in tune! If the band or the individual is out of tune, it creates an imbalance of sounds between the players and is very displeasing to hear. So how exactly do you play in tune? Follow the number one fundamental rule: “Warm up before tune up.”

So much for practising at home. Some day, though, band rehearsals will return. Here are some of Resa’s recommendations for when we do get back to playing in a group once again:

The top of the list is Balance and Blend. Basically, any band, regardless of size or proficiency, is a multipurpose team. They must provide enjoyment for their audiences, but equally important is the sharing of that enjoyment with their fellow band members. The key is balance and blend so that the audience does not simply hear individual instruments. The blend is the key. Good balance and blend is the result of painstaking attentive listening. As a final suggestion, just remember that, if you can’t hear the melody, you’re too loud. As a rule of thumb, if you don’t have the melody, play about 30 percent below the dynamic marking. Many thanks to Resa for all of these recommendations for maintaining and/or improving one’s musical skills while unable to play in a group.

A thought if solitary practice becomes too hard: although most did when they began their music activities, very few members of community bands still take private lessons. While I have not seen any advertised, I am sure that there are some instrumental music teachers who are offering private lessons over Zoom.

Resa’s remarks about balance and intonation got me investigating, on the internet, a concept I have occasionally heard referred to as “The Pyramid Approach.” To my surprise I found no fewer than four different pyramid approaches relating to music. The one that I was looking for is a means of solving problems of balance and intonation, and was defined by composer Francis McBeth. This pyramid approach is based on the theory that, at any given dynamic level, the higher-pitched instruments should be playing softer than the lower-pitched ones. This is consistent with the notion that players should be able to hear the bottom notes of the chord so that they can tune to them. McBeth illustrates the concept with the use of an isosceles triangle divided into four levels. At the peak of the triangle are the higher pitched instruments, piccolo, flute, first trumpet and first clarinet. The next level down would include second and third trumpets and clarinets. The third level has the horn, and alto and tenor saxes. At the bottom, fourth level, are second and third trombones, euphonium, baritone sax, bassoon and tuba. In this model the width of the triangle is a measure of volume, so that the higher the voice, the softer the sound should be.

So much for individual practising at home. What about the social component of band membership? Here’s where Zooming comes in. When I went to school eons ago, according to my Oxford Dictionary the word zoom meant “move quickly, especially with a buzzing sound.” Now, in 2020, zoom has come to mean something quite different. On my latest check, I learned that Zoom was the “leader in modern enterprise video communication with an easy, reliable cloud platform for video and audio conferencing.”

In the midst of our great pandemic, most musical groups have cancelled all rehearsals and concerts “until further notice.” However, as reported in the last issue, many have now taken to Zoom. While most Zoom sessions are friendly chats to at least retain social contact with friends in the group, some have taken a more challenging approach. I learned recently of a musical group which had not cancelled one of their regular rehearsals. In keeping with the times they would be rehearsing in the Zoomiverse.

The question then is how do they do that? Using Zoom, a performer is only able to hear their own contribution along with that of the leader. However, there are various ways of producing group music over the internet. Some of these virtual performances are complete with video showing each player in a separate frame. Others just have the integrated sound of all of the performers with no video. A couple of each have caught my attention recently.

The Uxbridge Community Concert Band (UCCB) is a summertime-only band that usually rehearses from May to August and presents a few regular concerts during that time. At the end of each season band members vote to choose one selection from the season’s repertoire which they would like to play during the following season. Their choice to play again in 2020 was Nimrod from Elgar’s Enigma Variations. This year there will be no rehearsals or concerts, but they have produced an excellent performance of Nimrod with all members playing at home. All members received their individual parts by email to practise on their own time. When it was time to record, each member listened to a recording of Nimrod on some form of earphone on their computer, while watching the conductor on the computer at the same time. They played their parts into the microphone of a separate device such as a cell phone, while reading the music which they had received earlier. The performance, which I subsequently heard, had tone and balance far better than I had anticipated. 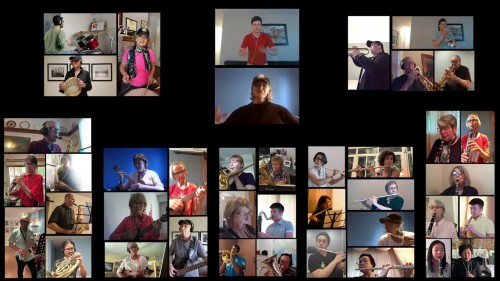 Other forms of “over internet performance” involve different means of providing all performers with the tempo. The vast majority of groups use some form of an audio click track or similar means to provide a beat. We recently had the opportunity to hear and see a virtual performance by the New Horizons Music North York Band under the direction of Susan Baskin.

For their performance they chose a selection which was 54 bars, straight ahead, with no time changes. It was also very easy so that people could concentrate on playing accurately with good tone. Everyone received an audio guide track at 120 bits per minute (BPM), with a sync beep, eight prep beeps and the basic tunes, and then played along with that to create recordings of their individual parts.

Members had a deadline with three weeks to prepare. They all made AV recordings of themselves in their own time. According to Baskin, the hardest thing was teaching everyone how to make and save a recording, and then upload it to YouTube. On the technical side, she had the assistance of family members. Her composer son, in Berlin, created the audio guide track. At home, another son and friends formed the “tech crew.” As for the conducting in the video, she says that it is totally fake.

In the news we are regularly hearing many ways of saying “Thank You” to all of the frontline workers who are dealing with this pandemic every day. In fact there has already been one such thank you in the form of a TV special called One World: Together at Home, a musical celebration in support of frontline healthcare workers in the fight against the COVID-19 pandemic.

When that thank-you day arrives, many community musical groups will have, or will be looking for, some form of musical salute to celebrate that day. One composition that I have heard mentioned as as a possibility for that day is Summon the Heroes. This work was originally written by the American composer John Williams for the opening of the 1996 Summer Olympics in Atlanta, Georgia. It was dedicated to, and originally played by Tim Morrison, trumpet soloist of the Boston Pops Orchestra. There is now available a concert-band arrangement by John Higgins.

Another possible opener for a post-pandemic concert might be from George Friedrich Handel’s Oratorio Judas Maccabaeus. Sometimes referred to as Hail the Conquering Hero, and sometimes as See the Conquering Hero Comes, this is the most famous chorus from that oratorio. Composed in 1746, and first performed in Covent Garden, London in 1747, it has been a concert favourite ever since. I understand that there is now a concert band arrangement available of that.

Let’s look ahead to that day when community musical groups get back to regular rehearsals, and we can all enjoy music together, whether performing or listening. 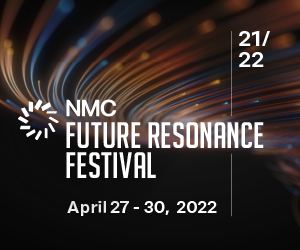