While on the subject of calamities disrupting band activities, two very different calamities for bands come to mind. The first of these took place in January 1945 at the Canadian Navy’s Signal School in Saint-Hyacinthe, Quebec. The Signal School’s band had played an evening concert in Montreal. When they arrived back, late in the evening, the band members left all of their instruments in their bus which was then parked in the garage. Somewhere around 4am a fire broke out in an adjacent building where a large quantity of explosives were stored. Band members and others, manning fire hoses in temperatures of -20F, watched as the inferno destroyed all of the band’s instruments and music.

The other calamity occurred in Newmarket. In 1899, Great Britain declared war in South Africa (in what was called the Boer War). Shortly thereafter a number of Canadian regiments offered their services and a cablegram of acceptance was received from the Imperial War Office. In May of 1902, when word came of British victory at Pretoria, the mayor and council created a committee to organize a patriotic concert to celebrate the victory.

The following is an excerpt from the local newspaper of the time:

“A local holiday was granted, the citizens band engaged in preparation for a grand celebration. Rockets were procured for a magnificent display visible from the old dam that was partly composed of a platform with a railing extended over the water.

“On the platform, the band was stirring the fervor with patriotic music. The box of rockets and other fireworks had been set upon this platform and the first rocket was set off.  Unfortunately, it was thrown backwards and exploded among the remaining rockets. An uproar ensued as a great geyser of colourful combustion went up. Bedlam reigned. Members of the band were thrown into the water where, clinging to their instruments, they floundered. One rocket shot through the drum, ripping the heel from the shoe of the drummer.  And still the fireworks continued. A portion of the dam was damaged but though the bandsmen received a thorough ducking, no lives were lost.  I am sure it must have been unanimous that of the many celebrations staged throughout Canada, those of Newmarket must have been unique.”

Wychwood: Of the musical presentations which I have attended in recent weeks there are three which warrant mention. The first of these was the Wychwood Clarinet Choir’s “Midwinter Suites”. As usual, Michele Jacot and Roy Greaves entertained with music from Leroy Anderson to Ralph Vaughan Williams. In this performance there were not only solos by Jacot and the full choir, but works by small ensembles from within the choir. For me the highlight was the full choir’s performance of Vaughan Williams’ English Folk Song Suite.

Richard Herriott: In the February column I mentioned that the Encore Symphonic Concert Band would be performing a special concert on February 28 to provide some assistance for pianist and composer Richard Herriott who was recently the victim of a serious fire where he lost everything. The proceeds of this concert were to be a part of a GoFundMe campaign to help him get back on his feet.

I had the pleasure of attending this concert. My vocabulary does not have sufficient superlatives to describe the evening. One feature was Herriott’s performance of his Four Note Concerto. For this number, audience members were asked to call out any four notes of the musical scale. Then Herriott began to improvise on those four notes. From very simple note sequences it advanced to a very pleasant melodic solo piano performance. Also in the first half of the concert was a flugelhorn solo by band conductor John Liddle. I was familiar with Rodrigo’s Concierto de Aranjuez, but had never heard it before on a brass instrument. This arrangement by former band member Eddie Graf would be a worthy addition to any band’s repertoire.

While the four-note concerto was Herriott’s only part in the first half of the program, the second half was all his. An arrangement of Slaughter on Tenth Avenue for piano and band was followed by Liszt’s St. Francois de Paule marchant sur les flots for solo piano. The grand finale was Ferde Grofė’s arrangement for piano and band of Gershwin’s Rhapsody in Blue. An amazing performance of an excellent arrangement.

Not once during this concert was there any sheet of music on the piano. It was all stored in Herriott’s mind. Similarly for John Liddle’s solo. It was all from memory. This talent always makes me wince, because I couldn’t play Twinkle, Twinkle, Little Star without the music in front of me.

HMCS York Navy Band: For a different sort of performance, we recently attended a “recital” by the Band of HMCS York, Toronto’s Reserve Naval Division. Yes, the term was recital, not concert. This ensemble is a large concert band with all of the usual instrumentation, but on this occasion, the performance venue was the Naval Club of Toronto, a social club whose members are Navy Veterans and associate members. Since there could be no way to set up such a large group to perform, it was an ideal location for several ensembles in a friendly, intimate atmosphere.

This Navy Band is an ideal group for such a program. Unlike most bands, which only play as a single large group, they have developed several small ensembles. Not only does this aid in the development of musical skills, but there is a social benefit. Members get to know their fellow band members. Personally, I can think of many groups where I have played for years, but never got to know members on the other side of the rehearsal room.

In this concert we never did hear the full band, but heard excellent performances from no fewer than 11 small ensembles, with the band’s music director, Chief Petty Officer Maggie Birtch proudly introducing them. The ensembles varied from such standards as brass quintet to a tuba quintet and flute ensemble. Throughout there was one person who stood out. That was Leading Seaman James Chilton, who is known in civilian life as Doctor James Chilton PhD.

In the opening number Chilton was playing trombone in the brass quintet; a bit later he was playing the penny whistle in the Irish ensemble, along with the previous brass quintet’s euphonium player who had switched and was now playing violin. After intermission, Chilton then led both the trombone quartet and a group named Band Shells, in which the group played six different-sized conch shells, each of which produced a range of different pitches when the players moved their hands in and out of the open end.

The highlight of the evening occurred when Chilton pulled out his didgeridoo. I had heard him perform on this instrument before, but this time he added accompaniment. He accompanied himself on a theremin. Imagine blowing into a wind instrument supported on a stand while accompanying yourself with your hands on a different instrument. 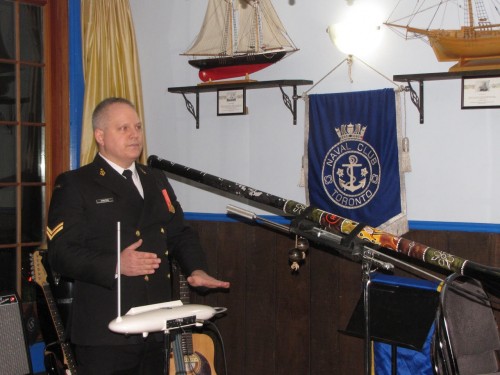 For those not familiar with the terms, a didgeridoo is a wind instrument, generally anywhere from three to ten feet long. The original instruments developed by aboriginal people in Northern Australia an estimated 40,000 years ago were made from fallen eucalyptus branches that had been naturally hollowed out by termites. As for the theremin, I read one definition which described it as the only instrument which is played by not touching it! The performer stands in front of the instrument and moves his or her hands in the proximity of two metal antennas. The distance from one antenna determines frequency (pitch), and the distance from the other controls amplitude (volume). It is named after its inventor, Léon Thermin, who patented the device in 1928 (not an auspicious time economically, as it turned out, to launch a new product).

Overall this delightful recital by members of a large concert band showed what can happen when a larger ensemble rises to the challenge of creatively adapting to a size-restricted venue by enabling smaller groups to showcase their various talents (including hidden talents) with instruments they don’t generally employ with the band.