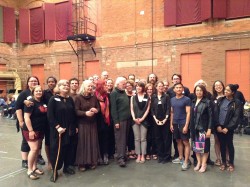 It was late in the day on what had been a long Saturday a few weeks ago. The multiple choirs, percussion, brass, winds, solo performers and dancers had just completed a run-through of Part One of Murray Schafer’s epic piece Apocalypsis which the Luminato Festival is presenting June 26, 27 and 28. Schafer himself was there, his first chance to hear what we had all been up to in the weeks prior.

The music came to its close. The brilliant conductor David Fallis lowered his hands. A silent hush fell over everyone. Just for a moment. It was as if we all had to take a collective in-and-out breath to honour what had just transpired. We were witness to something much bigger than each of us individually: the collective whole creating and bringing to life this masterpiece. Yes, I will say that, a masterpiece. It needs to be said, to be recognized, here in Canada. To respect the breadth of the visionary force that propelled Schafer back in the late 1970s to pen this work. Like a modern-day John the Divine, the author of the original biblical book of Revelations. Yet instead of the crashing doom and destruction we often associate with the apocalypse, this transcendent moment that occurred as the music came to its close was serene and sublime, creating a deep quiet within. A moment for revelation – which is in fact the true meaning of the word apocalypse.

I myself have been in one of the choirs, the Speech Chorus, in which we get to yell, chant, call out warnings and even scream. So lest you get the impression it’s all peaceful and calm… No, definitely not. There is plenty of cacophony and sturm und drang going on – of course. But it was this flicker of silence that occurred that day at the end of the first half that remains so strong in my memory. This inward space that prepares us for “what is yet to come” in Part Two. Using an entirely different set of choirs, Part Two, as I recall from having witnessed the original performance in 1980, continues and builds upon this moment.

It’s quite remarkable that for the past month, hundreds of performers, conductors, production staff and stage crew have been dedicating their June weekends to the rehearsals for Apocalypsis under the brilliant vision of director Lemi Ponifasio and members from his Company MAU based in New Zealand. I remember well the first rehearsal when we all met Lemi, who told us that in essence, what we were creating was a ritual by bringing this piece to life: a ceremony to which the audience is being invited. And as I’ve witnessed and participated in the final rehearsals with lighting and staging this past week, it is indeed just that. A meditation in sound and movement, light and image.

I could on about details and specifics and the appearance of star performers, but that’s not really what this is about. Ultimately it’s about creating a vision for a new kind of world. It’s as if we are opening up a crack through which a different collective story can find its voice. This old one we are desperately clinging to that has lead to untold human suffering is no longer sustainable. It has run its course. And just as John the Divine of old received his vision from a large crack in the wall of a cave on the island of Patmos, this performance is a collective moment to stop and pause, reflect, cleanse and consider another possibility. This is the power of what the sound of silence can create. As we say in the speech chorus: “Tell the people of what is now, and what is yet to come.”