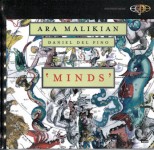 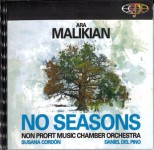 The Lebanese-born Armenian violinist Ara Malikian is one of the younger generation of soloists who, while classically trained, are not afraid to let other musical styles influence their playing.

Malikian, currently concert-master of the Madrid Symphony Orchestra, has recorded the solo works of Bach, Ysaÿe and Paganini, but is clearly very much at home in these two CDs of mostly contemporary – and mostly Spanish and Argentinian – works, where his love of gipsy and tango music in particular makes him an ideal interpreter.

The “Minds” CD is a selection of shorter works for violin and piano. Only Gerald Finzi’s lovely Elegy and an early Kodaly work, the Brahmsian Adagio, are not recent compositions. Astor Piazzolla’s Tanti Anni Prima is a beautiful opening track; Lera Auerbach’s Postlude is short but sweet.

Marjan Mozetich’s Desire at Twilight is recorded here for the first time, as is Agua y Vino by Fernando Egozcue, formerly one of Piazzolla’s arrangers.

Jorge Grundman’s sonata What Inspires Poetry, also a premiere recording, is the biggest work on the disc, but also unfortunately the least appealing for me, with too much formulaic writing and little character. Elena Kats-Chermin’s Russian Rag, in the same vein as William Bolcom’s Graceful Ghost, is a charming closer.

There are three larger works on the oddly-titled “No Seasons” CD. (An RTVE concert of the same works by the same artists was called – more logically - 12 Seasons)

Piazzolla’s Four Seasons of Buenos Aires were originally written as separate pieces for his quintet with bandoneon between 1964 and 1970. This arrangement is by Leonid Desyatnikov, who added direct quotes from Vivaldi’s Four Seasons. Malikian is again clearly in his element with Piazzolla’s idiosyncratic music.

Joan Valent’s Four Seasons in Mallorca fits Malikian’s style perfectly, but Grundman’s Four Sad Seasons Over Madrid, for soprano, violin, piano and string orchestra, is a disappointment. Susana Cordon has a big voice, but really struggles with her English pronunciation. Not that it matters – despite her singing at full belt, the unsympathetic setting and heavy orchestration make her words almost inaudible.

Each CD comes in a beautifully-produced hard-cover booklet in English and Spanish, although the English translation is awkward at times. Sound quality is excellent throughout.

Without the necessity for surround-sound or other methods of sonic dissemination, James Tenney (1934-2006) composed tension-laden pieces such as the three here, whose crescendos and decrescendos derive from concentrated orchestration. As the Berlin-based, ad hoc Zeitkratzer ensemble of two woodwinds, two brass, three strings, percussion and director/pianist Reinhold Friedl demonstrate on this exceptional CD, properly performing the themes of the long-time (1976-2000) York University music professor depends as much on harmonic convergence as intonation, attack and acoustics.

Most fascinating and mostly fortissimo is 1988’s Critical Band. Based on standard pitch A and its fundamentals, this exercise in tonal expansion undulates on pitches that concentrate and divide as they modulate infinitesimally and recurrently. Only when the final variation arrives can the capillary timbres of Matt Davis’ trumpet and Hayden Chisholm’s alto saxophone be distinguished from the others.

Slightly lengthier, 1976’s Harmonium #2, which details the deliberate build-up and break-down of a chord, exposes fundamentals, as the harmonic progression expands through Friedl’s intense keyboard clusters. After variants on the narrative – related to the circle of fifths – reflect inwards onto themselves as they advance chromatically, the resolution involves a crescendo involving articulating Hilary Jeffrey’s trombone reverberations plus thick piano patterns.

Distinctive, the performances are both authoritative and inventive.

“A sense of exile”, the opening of the CD booklet notes tells us, “is not always accompanied by geographical displacement.” Hence the title of this outstanding disc of virtually unknown works by Adolf Busch – who, although not Jewish, chose to leave Germany when Hitler came to power in 1933 – and Walter Braunfels, who, while half-Jewish, chose to remain in Germany despite the implications for his career and personal safety.

Toronto’s ARC Ensemble (Artists of The Royal Conservatory) specializes in reviving long-buried and essentially-forgotten repertoire, especially the works of composers whose lives were fundamentally altered by the Second World War and in particular by the Holocaust.

Both Busch, now remembered primarily as a violinist and as leader of the Busch Quartet, and Braunfels were established composers in 1920s Germany. Busch’s String Sextet Op.40 from 1928 (revised in 1933) remains unpublished, however, and Braunfel’s String Quintet Op.63, from 1945, has never been recorded before. Both works are strongly in the German Romantic tradition, a factor which worked against both composers in the post-war years, despite their treatment by the Third Reich.

The ARC members – Marie Bérard and Benjamin Bowman (violins), Steven Dann and Carolyn Blackwell (violas), Bryan Epperson and David Hetherington (cellos) – are superb throughout. Recorded in the RCM’s Koerner Hall last November, every nuance of their performance is magnificently captured by producer David Frost. The recording has the distinction of being the first produced in this acoustically superior new concert venue. The excellent booklet notes are by ARC Artistic Director Simon Wynberg. An absolute gem of a CD.

This tremendous CD of recent orchestral works by the English composer Thomas Adès offers convincing proof that, while contemporary composers may have difficulty gate-crashing the standard repertoire, their efforts deserve - and reward - our fullest attention.

Born in 1971, Adès is clearly a composer with ‘something to say’. There isn’t a weak or unconvincing track here, and the orchestration is outstanding. Tevot, written for Simon Rattle and the Berlin Philharmonic in 2007, is a live recording from a Berlin concert the same year. The haunting Violin Concerto, Concentric Paths, written in 2005 for Anthony Marwood and the Chamber Orchestra of Europe, is a live 2007 performance by them at London’s Barbican Hall, with Adès conducting. The same concert included the UK premiere of Three Studies from Couperin (2006), fascinating re-workings of Couperin keyboard pieces that retain the same number of bars as the originals as well as the same rhythms and harmonies. Finally, the National Youth Orchestra of Great Britain under Paul Daniel gives us the richly decadent Overture, Waltz and Finale, the suite that Adès made in 2007 from his first opera, Powder Her Face, although this time using full orchestra instead of the original 15 instruments.

It’s tempting to play the ‘sounds like…’ game – here’s Britten (Adès was artistic director of the Aldeburgh Festival from 1999 to 2008); there’s Janacek; that’s Ravel – but there is no doubting that this is an original and accomplished individual voice.

Magnus Lindberg is on a roll these days, carving out a solid position as the leading Finnish composer of his generation. Graffiti is Lindberg’s first major choral work, and it’s a winner. Its text, derived from first century Latin texts preserved on the walls of the doomed city of Pompeii, would certainly have appealed to Carl Orff, and while it is true that there are archaic harmonies to be heard from the thirty throaty voices of the admirable Helsinki Chamber Choir, Lindberg’s bracing sonorities and teeming orchestral textures are far more daring than anything Orff could possibly have imagined.

The title of the companion work, Seht die Sonne (Behold the Sun), is derived from the conclusion of Schoenberg’s Gurrelieder, that composer’s lavish vocal farewell to Romanticism. Lindberg’s work, originally commissioned by Simon Rattle for the Berlin Philharmonic, received its Canadian premiere by the Toronto Symphony during Lindberg’s memorable visit to Toronto in 2008. It is a broad work on the scale of a Sibelius tone poem, flamboyantly rhapsodic and emotional. Though the abrupt and often unaccountable changes of mood make this a more challenging item than the immediately accessible Graffiti, Oramo and his Finnish radio orchestra prove themselves up to the challenge. Though texts and translations are provided and Kimmo Korhohen provides pithy program notes, it’s a pity that neither the soloist for the prominent piano part in Graffiti nor the solo cellist in the subsequent work are identified.


Percussion can be an alien world. It speaks, however, with a language strangely familiar to some deeper part of us that doesn’t need a “tune” to recognize music. Those who write for it and those who play it understand its architecture and philosophical constructs well, but even audiences can be drawn quickly and seductively into this world of sounds.

The interpretive role of the performer as guide on any such journey is critical. Deciphering the “code” of notation into a meaningful aural experience is no less daunting when a composer leaves much to the imagination of the player. German-born Markus Hauke is brilliant in his ability to illuminate the manuscripts of composers like John Cage, Iannis Xenakis, Bryan Wolf and Maki Ishii on this disc. His own composition, based on rhythmic themes from Wagner’s “Ring” is also testimony to his ability to speak the language convincingly.

While the array of percussion instruments on this recording seems like something capable of delivering an artillery salvo, Hauke nevertheless brings a great subtlety and sense of nuance to his playing along with the highly complex rhythms that we expect of a professional percussionist.

Most unusual on this CD is the piece by American composer Bryan Wolf. Dedicated to Hauke, the piece uses only metal instruments along with some electronic sounds. The distinctive ringing quality of the work suitably echoes its place in the Triptych “Trails of Glass”.

Surprisingly, this CD will sound as satisfying on your modest computer speakers as on your principal home sound system.