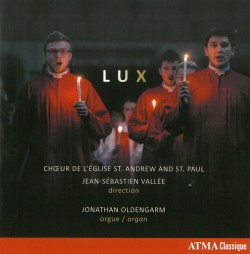 While this CD obviously represents a Christmas disc, it is rather more than that. The program is anchored by modern arrangements of traditional carols such as Once in Royal David’s City and O Come All Ye Faithful. But much of the material is more adventurous and many pieces were composed only recently. Of particular interest is In the Bleak Midwinter, a setting of a poem by Christina Rossetti. Singers and their audiences will be familiar with this piece either in the setting of Harold Darke or in the much finer one by Gustav Holst. But this CD gives us a contemporary alternative by the Welsh composer Paul Mealor. That anthem is very fine, as are a number of others. An older kind of music is represented in the songs of Mendelssohn and Herbert Howells.

The Choir of the Church of St. Andrew and St. Paul, a Montreal church, is an impressive body of 45 singers, in part professional, in part amateur. I recognized two names: that of the lead baritone Nathaniel Watson, whom we have often heard in Toronto, and that of the alto Duncan Campbell, who is the son of the soprano Kathryn Domoney and the baritone David Campbell. The choice of material is adventurous. It achieves the rare feat of presenting traditional Christmas music but also so much more than that.

Once in Royal David's City

In the Bleak Midwinter