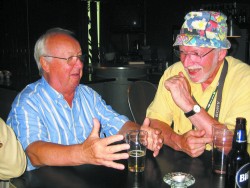 There have been so many books about jazz it is difficult to know what to buy — histories, biographies, essays, criticisms and some by superior writers such as Ralph Ellison, Gary Giddins, Nat Hentof, Albert McCarthy, Albert Murray and Scott Yanow.

But very few are as entertaining as Jake Hanna, The Rhythm And Wit Of A Swinging Jazz Drummer, a new addition to the ranks.

Jake Hanna was one of the great drummers but just as well known for his wit. He had an irrepressible sense of humour which endeared him to audiences and fellow musicians. In the band room he was always a centre of attention and wherever he was there was always laughter.

It was surely just a matter of time before somebody decided that there had to be a book about him and, to borrow the name of a jazz standard, “Now’s The Time.” The author is Maria S. Judge and she knew the Hanna family very well–she is, in fact, Hanna’s niece and a published writer of several books.

The early part of the book deals with the Hanna family and no other writer could have gone into more detail or have given a better insight into the environment that produced a man destined to become one of the legends of jazz.

The bulk of the work consists of anecdotes, remembrances by members of Hanna’s jazz community and contributions from friends and acquaintances. Together they convey a colourful picture of the drummer/raconteur who has left an indelible mark on the lives of so many of us.

He was the master of the one-liner on stage and off: “So many drummers, so little time.” Not all of them were original but somehow Hanna took ownership of them. If he liked you it was for life; if he didn’t it was also a pretty permanent arrangement. He was straight ahead in the way he played drums and straight as a die in the way he lived life.

Hanna could have been a great stand-up comedian, but was occasionally, in a friendly way, on the receiving end as when drummer Danny D’Imperio saw him come into the club and acknowledged him as “not just any old Tom-Tom Dick Dick or Harry Harry!” For once Hanna had no comeback.

It won’t spoil the book for you if I drop in a couple of stories from it like the time when Hanna was playing the Merv Griffin show and a famous singer agreed to an impromptu performance and said to him, “Give me four bars.” Hanna called out the names of four of the New York City bars where musicians hung out: “Charlie’s, Junior’s, Joe Harbors and Jim and Andy’s!”

Or the time when Mel Brooks and Carl Reiner were guests and people were panicking because Reiner was late. When he got there he was berated by Brooks. Reiner explained that he had just been to the doctor and was told he had arrhythmia, to which Hanna promptly responded “Who could ask for anything more.”

This is also a great “loo” book; in fact you should maybe buy two copies, one for your bookshelf and another for visitors who have to “spend a penny,” to coin, literally, a saying from my youth.

If you ever met Jake Hanna you will want to have this book. If he is only a name to you please buy it and enjoy getting to know him.

MR. ED: Jake Hanna was a huge fan of Ed Bickert, which will come as no surprise to anyone who heard Ed play. After the death of his wife Madeline, Ed retired from playing. I remember the evening very well. I was giving a concert of Ellington’s sacred music that night and at intermission we heard about Madeline’s passing. After that Ed simply stopped playing; a few years earlier he had had a fall on ice and suffered severe injuries to both arms from which he never completely recovered and with his wife’s death he simply didn’t have the will to keep on playing. No amount of coaxing could make him change his mind although he still shows up to hear musicians he likes.

I have a lasting memory of a recording session with Ed. The British trumpet player/bandleader Humphrey Lyttelton was in town and John Norris decided to make an album with him for Sackville Records.

The rest of the band included Neil Swainson on bass, Terry Clarke, drums, myself and Bickert. The music consisted of all originals by Humph, who showed up with no music! He would sing the various themes and we would go from there. Ed worked his magic and turned every number into music that was beautifully structured harmonically.

Like a lot of musicians I rarely listen to my own recordings, but when I do hear a track from that session it sounds like it had been arranged and well rehearsed, largely thanks to Mr. Bickert. And it was all done in one afternoon.

Well, on November 6 at the Glenn Gould Studio, you are invited to “Ed Bickert at 80: A Jazz Celebration,” with a line-up that includes Don Thompson, Neil Swainson, Reg Schwager, Terry Clarke, Oliver Gannon and others. Tickets are $45. Proceeds go to the Madeline and Ed Bickert Jazz Guitar Scholarship Fund.

Happy listening and, as Ted O’Reilly used to say when he signed off, “Think nice thoughts.”

Jim Galloway is a saxophonist, band leader and former artistic director of Toronto Downtown Jazz.  He can be contacted at jazznotes@thewholenote.com.