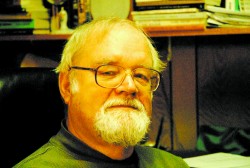 Unfortunately I find myself having to devote part of this month’s column yet again to a friend who recently passed away. I refer to Geoff Chapman an accomplished writer and a gentle man. He had wide-ranging interests and they included a great love of jazz, in fact it could rightly be called a passion. In the years that he wrote for the Toronto Star he covered theatre as well, but jazz stirred his emotions more deeply than anything else. Not that he ever made a big outward display of his feelings because nothing ever seemed to disturb that serene quality which has been described as a Buddha-like presence.

He was open-minded, always looking for something positive to say and I’ve yet to hear anyone say an unkind word about him. He was certainly a good friend to musicians, all of whom will think fondly of him.

Along with his talents, occasionally having the good fortune to be in the right place at the right time enabled him to leave the rest of the field trailing behind. I remember one night at the Montreal Bistro and Geoff was there to review the band. It was the same year that the jazz festival, because of imminent tobacco legislation, was about to lose the title sponsor, duMaurier. There was a grace period before the ban on tobacco sponsorship became law, but the sponsor decided to withdraw support as of that year.

To make a long story short, a good friend of the festival at City Hall, Sean Gadon approached the then mayor, Mel Lastman, and convinced him to intervene and call the then President of Imperial Tobacco, Don Brown. So there we were at the Bistro. Geoff was just getting ready to leave in order to file his review and in came a jubilant Sean Gadon with the news that the festival, which we had just cancelled had its funding for another year. Johnny-on-the-spot Chapman made some hasty notes before rushing off to file his story which scooped everybody else in town. 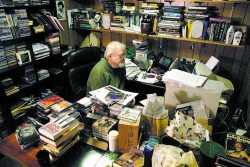 But what made him much more than just a competent writer was that along with his language skills, an inbuilt natural ability to convey with words, he also had a broad knowledge of what he was talking about and a desire to communicate with his audience.

It starts to sound like the qualities of a good jazz musician, doesn’t it?

I remember one evening we had dinner together and in casual conversation I discovered we had shared an unusual childhood activity. As kids we had both chewed tar and to this day I love the aroma of hot tar! I initially thought that it might in some odd way have had something to do with the fact that we were both Brits until quite recently.
I found a Canadian, albeit with the Irish name of O’Reilly, who, when he heard about our tar traits, exclaimed, “I used to do that!”

A good English beer, a cigar and listening to jazz was his recipe for a good time. Oh, and looking forward to seeing a good football — soccer, not rugby — match on TV.

When I think of Geoff, there is a line from a novel by Charles Dickens, “Our Mutual Friend” which seems a propos — “Have a heart that never hardens, a temper that never tires, a touch that never hurts.”

And now I will digress. My real introduction to acronyms was listening as a child to BBC — an acronym in itself — radio, and to a weekly comedy show starring Tommy Handley called ITMA which was made up from the first letters of the phrase “It’s That Man Again.” The show also introduced a classic, still widely in use today: TTFN — Ta Ta For Now.

Coming up with acronyms is a linguistic process that has existed throughout history. For example it was used in Rome before the Christian era, the official name for the Roman Empire, and the Republic before it, being abbreviated to SPQR (Senatus Populusque Romanus).

But acronyms became much more common in the 20th century with AT&T, Nabisco (National Biscuit Company), TV, Radar (short for for radio detection and ranging) and on and on. Back in the days when people actually wrote letters, some of you may have received or sent correspondence of a personal nature which had the letters SWALK on the back of the envelope meaning that it was Sealed With A Loving Kiss. Try that with a text message (lol).

Jazz has had its share of acronyms. Some of the most widely known were NORK (New Orleans Rhythm Kings), JATP — Jazz At The Phil, a travelling jazz extravaganza produced by Norman Grantz and the MJQ (Modern Jazz Quartet).

All of which is a preamble to KPMT, the Ken Page Memorial Trust which will hold its 14th annual jazz gala at The Old Mill on October 18 with a star-studded line-up including, from the United States, Harry Allan and Ken Peplowski on reeds, Warren Vache, cornet, Russ Phillips, trombone, and on piano Italian virtuoso Rossano Sportiello. The home team will consist of Terry Clarke, Alastair Kay, Reg Schwager, Neil Swainson, Don Thompson, Kevin Turcotte and your faithful scribe. Prior to the main event and in keeping with the goals of the Trust there will be a performance by the Ben Hognestad Trio featuring Matt Woroshyl from the University of Toronto Faculty of Music. You can enjoy them along with a complimentary cocktail. If you have never attended the gala this is a great year to get involved in support of jazz and the musicians who make the music. You’ll not see a line-up like this any place else in Toronto. For details see the ad in this issue of The WholeNote.

Meanwhile, now that the days are turning chilly it’s a good time to move inside and trade the hot sun for some hot choruses. As always, The WholeNote club listings, on page 55, are the town’s best guide to what’s on.