Jazz Festival season is well underway and it doesn’t get any easier to fill a concert hall with real jazz acts. Of course that begs the question as to what constitutes jazz. The parameters have changed drastically and the word jazz has been embraced by everything from airlines to deodorants. But for the sake of this discussion let’s use the term classic jazz which will range from Buddy Bolden and King Oliver to Miles Davis and John Coltrane. And if you question such diversity of styles, bear in mind that this year’s JUNO for best traditional jazz went to John MacLeod’s Rex Hotel Orchestra.

Yes, you can successfully present the Dave Brubeck Quartet, Wynton Marsalis and the Lincoln Centre Orchestra and All-Star packages like Return To Forever, but more and more festivals have to turn to performers with only a passing acquaintance with jazz. This year, Tom Jones headlined at the New Orleans Jazz & Heritage Festival and one of the headliners at the Vienna Jazz festival is – wait for it – Liza Minnelli! With all due respect, she has as much to do with jazz as I do with ballet dancing.

I remember a disastrous attempt in 1991 by Kiri Te Kanawa to make a jazz album with Andre Previn on piano, Mundell Lowe on guitar and Ray Brown on bass. It’s just not that simple. You can’t just decide to be a jazz performer overnight.

In Toronto, one of the major attractions is Jessye Norman and I’m sure she will be more successful than Kiri Te Kanawa, but it is still something of an anomaly to find her topping the bill at a jazz festival.

But it will sell tickets.

There was the occasion when Louis Armstrong and Lotte Lenya were recording “Mack The Knife.” Between takes tape was running. I have a copy on cassette of Armstrong trying to help Ms. Lenya syncopate the phrase, “Mack The Knife,” and try as she might, she just could not get it right. The jazz interpretation of those three little words which came so naturally to Louis Armstrong, one of the great jazz singers, was completely foreign to Lotte. 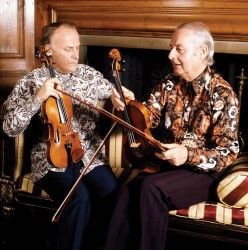 More successful were the collaborations between Stephane Grappelli and Yehudi Menuhin, but there is little doubt as to which of them is the jazzer.

More and more, the real jazz content of festivals is to be found in smaller venues. Maybe that’s how it should be and has to be. The intimacy of a smaller venue lends itself to the spirit of the music and when jazz moved into large concert halls it lost something. I am not trying to take away from the success of presenting jazz in a more formal setting. The Modern Jazz Quartet, among the first to meet with acclaim in making their music successful in the concert hall environment, made some wonderful music, but hearing Milt Jackson in a club setting was a far more satisfying jazz experience than listening to him within the confines of the M.J.Q.

Which takes me back to the observation that bigger is not necessarily better when it comes to enjoying jazz. In fact, largely because he liked a freer flowing style of playing, Jackson left in 1974, causing the group to disband, although they re-formed in 1981.

It’s that time of year when I often find myself in Europe. Not that I’ve been lost or missing, you understand. As I write this I am in Vienna enjoying one of the few remaining jazz clubs that operates on a six nights a week policy. Jazzland is the name of this friendly cellar club and next year it will celebrate 40 years of presenting jazz. It is unpretentious, but has a history going back 500 years when it was an escape route in times of siege. The walls are lined with photographs of famous jazz musicians who have played in the club.

Long time readers of the column might remember earlier references to this jazz oasis, but it bears repeating that Axel and Tilly Melhardt, owners of the club, must be the best in their field.

By the time you read this, my 13 weeks of being on Jazz.FM91, Sundays from 4pm to 5pm will have begun. I hope you will give it a whirl and those of you who know me won’t be surprised to hear that each week I will feature a recording which demonstrates humour in jazz, such as Lester Young singing “It Takes Two To Tango,” and Bill Harris and Ben Webster asking for “Just One More Chance.”