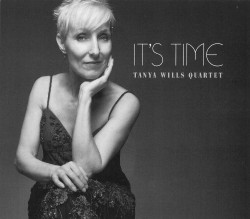 Carrying the DNA of an artistic lineage, it is no surprise that gifted vocalist, dancer and actor Tanya Wills would enter the family business and manifest an international performance career. With the release of her debut CD, Wills has drawn from her diverse career experiences and fashioned an eclectic, stirring and musically stunning recording – beautifully recorded by Bernie Cisternas. Acting as producer here, Wills has assembled the perfect musical complement to her smoky, substantial, mezzo-soprano: Jordan Klapman on piano, Bill Bridges on guitar (and also primary arranger) and Ron Johnston on bass.

A few of the sources of the intriguing material on this project come from the worlds of musical theatre, the European/American cabaret culture of the post-WWI era, American popular song, traditional folk music, a proto-rock ‘n’ roll contribution from Elvis and two original compositions, including Tony Quarrington and Klapman’s dark bossa, Rain on the Roof.

One of the many standouts is Wills’ performance on Lazy Afternoon. Her voice is exquisitely controlled, as she weaves a laconic, gossamer web of sensuality around the mesmerized listener, and Bridges’ guitar accompaniment is nothing short of luminous. Another track of note is Arthur Hamilton’s Cry Me a River – a passive/aggressive anthem made popular by the late Julie London. Wills puts her own contemporary stamp on the tune, cleverly morphing the intent of the lyric into a statement by a strong woman (rather than a victim’s lament). I would be remiss if I didn’t single out the joyous rendition of If I Were a Bell – Frank Loesser’s hit from the venerable musical Guys and Dolls. Wills imbues this tune with just the right amount of spice and sass.

Listen to 'It's Time' Now in the Listening Room Daniel Bellegarde has enjoyed a 35-year career as a freelance percussionist primarily in Quebec. As he explains, Anba Tonèl (Under the Arbor), his first album as a leader, primary arranger and composer, is the fruit of his research on the confluence of European and African musics in the French Caribbean.

In Anba Tonèl, with the aid of nine musicians and five singers, he explores – through arrangements and compositions – unfamiliar musical territory to outsiders: rural French Caribbean music, the result of that hybridization. Dance music represented includes the contra-dance (square dance), quadrille, minuet-congo, and Haitian twoubadou, a popular genre of guitar-based Haitian music. The album aims to evoke the music performed by Haitian and French West Indies slaves during the 19th century and field workers in the early 20th.

Not a synth or drum set to be found here, the lead French Creole vocals by Marco Jeanty are accompanied by all-acoustic instrumentation. We hear the prominent sound of the banjo (which appears to have been played in the Caribbean before mainland North America), violin, guitar, dobro and manouba (bass kalimba-rumba box), as well as percussion instruments from the French Antilles including tanbou di bass (large tambourine), ti bwa (small wooden slit drum), graj (metal scraper) and chacha (calabash rattle).

I’m no expert on the origins or development of this music. As presented here by Bellegarde however, it has considerable range of mood and is full of danceable musical energy and charm; plus it’s sung and played with authentic-feeling élan. 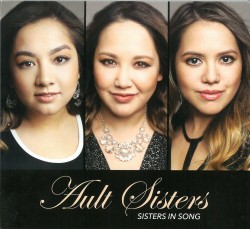 Amanda, Alicia, and Alanna Ault bring clear diction, excellent ensemble, musical mastery, and inspiration from other sister groups to their vocal jazz trio, The Ault Sisters. The CD Sisters in Song adds to a career that includes Toronto club and Ontario jazz festival performances, plus appearances on Vision TV’s Your All-Time Classic Hit Parade. Of the disc’s old-style numbers, I like both the well-enunciated lyrics and Adrean Farrugia’s hot piano solo in Is You or Is You Ain’t My Baby/Wikked Lil Grrls. Songs from the Pointer Sisters’ era are particularly notable: Fire, Slow Hand, and Neutron Dance/Axel F. The Ault Sisters’ versatility shows, with smooth close harmony in the first two and up-tempo precision in the last; each member can lead vocally and voices intertwine seamlessly in Dylan Bell’s sophisticated arrangements. Solos adding further distinction to these tracks come from Ted Quinlan, guitar; Kevin Turcotte, flugelhorn; George Koller, upright bass; and Farrugia -- only four of the disc’s 12 all-star jazz instrumentalists.

The Ault Sisters express restrained feelings in anything from whispery insights to earnest pleas in Dog and Butterfly and Sincerely. The vocalists show to advantage in both songs as arranged by Debbie Fleming; so does the group’s own creation Let’s Get Away. Thanks also to Greg Kavanagh’s fine producing, this lovers’ title seems to evoke for me a symbolic getaway to the music of the past, with the sound of the present! Flutist and musical polymath, Ron Korb’s modus operandi is to study a musical genre, assimilate it and then compose a program of music reflecting that genre, take it on the road, and, finally, put it on CD, performed on the flutes most appropriate to the music, from his enormous collection of instruments from all over the world. For his 33rd CD, World Café, the musical genre he has chosen is “the Latin world ... Spain, Cuba and South America.” The outcome is both convincingly authentic and addictively alluring!

Take the very first track, Bailar Conmigo, which begins with a burst of infectious rhythmic energy from his collaborators, the perfect foil for the long but always forward-moving phrases of the melody, played in the sultry low register of a regular concert flute. To his credit, Korb moves out of the way partway through for a terrific solo by lead guitarist, Bill Bridges. Similarly, track two, Sans Regret, was intended to be a flute solo but, as Korb explains in his notes, Joe “...Macerollo did such an incredible job that this song became an accordion solo.”

Macerollo isn’t the only top-flight musician on this CD. In track four, Hilario, he enlists the great pianist Hilario Durán and two other Cuban musicians, Papiosco on congas and Roberto Riveron on bass. Korb’s stunning solo line rides the energy of his fellow musicians like a surfer on giant waves!

The remaining nine tracks are just as good as the three I have mentioned. A stellar effort! For the Tiki Collective’s opening salvo, producer Jaymz Bee has assembled a conflagration of noted musicians and chirps that could rival Joe Cocker’s Mad Dogs and Englishmen tour. Tenuously classified as “Exotica Lounge Music,” the 13-track project is essentially an ensemble of friends (led by musical director Eric St-Laurent) exploring various musical sub-genres, including snippets of surf, retro, jazz, pop and South Pacific Island influences of the 50s Tiki Culture. The tune menu contains a couple of standards such as Chelsea Bridge, rock anthems (the electric-sitar drenched Don’t Fear the Reaper) as well as pop hits, including a version of Nigerian/British chanteuse Sade’s mega-hit Sweetest Taboo.

Does the musical excess here exceed or succeed? Either way, Muse is an entertaining ride – so have a Mai Tai, and enjoy! A 35-year, 30-album career makes Seattle-based flute player Gary Stroutsos a veteran of the ethnic flute scene. He’s been heard in concerts, on albums, on TV and film soundtracks. While he considers jazz and new age music pioneer flutist Paul Horn (1930-2014) one of his mentors, Stroutsos has made his own mark exploring the music of Native American flutes. His passion for the stewardship of diverse cultures and the natural environment can be heard throughout the 16 tracks of Night Chants. All the music was composed and performed by Stroutsos on various Native American flutes with technical and musical assuredness and cultural sensitivity.

Stroutsos performs on a wide range of flutes here. They include Dakota 5-hole cedar and 6-hole cedar elk flutes, a Hopi rim flute, a Navajo 6-hole cedar flute, as well as river cane wind whistles and clay aerophones. The various timbral and tonal qualities evoked by each flute are vividly captured in the recording, enriching the overall contemplative mood. In addition, the introduction of occasional percussion and sounds of nature – such as bird song, night frog choruses and wind – pair beautifully with Stroutsos’ unhackneyed and unhurried flute melodies. Together they share a contemplative space that invites listeners into a particular and peaceful sense of place.

I began listening to Night Chants wondering if I would last an entire album of solo cedar flute. Given the rich musical-cultural journey Stroutsos takes us on, I’d gladly embark again soon.