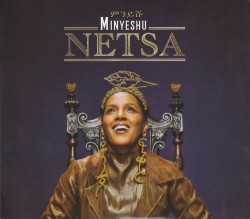 The path stubbornly antithetical to globalism is often littered with civilizations that remain almost supernaturally mysterious. One such civilization and culture is the land of Ras-Tafari and, double-entendre, an amusing example the latter ensconced in a sign at Addis Ababa airport that says: “Welcome to Ethiopia, Centre of Active Recreation and Relaxation.” A scrunched-up brow, no matter how deep the furrows, provides no respite. Neither might the repertoire on Netsa by the eminent effervescent vocalist, Minyeshu Kifle Tedla.

The great Bill Laswell – in typically Homeric manner – first approached Ethiopia through what he famously described as “cultural collision”. It was Laswell who enabled us to peer – magically, through a glass darkly – into the ontological works of Hakim Bey, the Moroccan sojourns of Paul Bowles and Brion Gysin. Laswell’s cultural collisions also presented the ancient-future of the ineffably brilliant Ejigayehu Shibabaw – and with her mystical music the washint and the kirar (ancient Ethiopian flute and harp respectively), the latter of which was believed to be played by King David when he composed the Psalms.

Minyeshu, to her enormous credit, has brought the ancient-future of Ethiopian music – indeed Ethiopian culture – to a kind of wonderful artistic maturity. Her majestic vocal ululations propel, with irresistible kinetic energy, music redolent of colourful tone textures and transcendent rhythms to conjure a kind of musical magisterium formed – as it were – out of the vivid red clay of the land of Ras-Tafari. Maddening seduction is imminent.