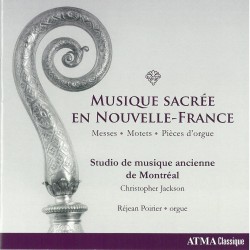 This recording is a re-issue of a 1995 album originally titled Le Chant de la Jerusalem des terres froides on the French label K617. At the time, founding member Christopher Jackson (1948-2015) directed Studio de musique ancienne de Montréal. The program represents sacred music from the daily life of 17th-century French settlements in the New World. Books of plainchant brought to New France were utilized in church services, but also formed the basis of a new style, adopted in both new and old worlds, which added ornamentation borrowed from secular repertoire. Mass excerpts by Henry du Mont, based in Paris, serve as excellent examples of this practice.

In addition to Gregorian chant, books of petit motets were also brought to New France. Composed for soloists (or for no more than three voices) with chamber instrumentation, this proved much easier to realize in the colonies than the grand motet, which required large forces. Composers of the form such as Nicolas Lebègue and André Campra are represented on this recording, highlighting the divinely sweet persuasion of the small ensemble. Two of the pieces, Inviolata and Ego sum panis vivus, are examples of the petit motet translated into the Algonquin Abenaki dialect to abet religious conversion of the Native population. The choir and soloists’ exquisite renderings throughout the CD bring the history to life, enhanced by organist Réjean Poirier’s performances of pieces from Livre d’orgue de Montréal.