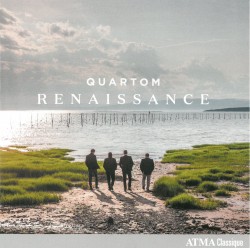 Recorded at St. Esprit Church in Montreal, this CD celebrates Quartom’s tenth anniversary, bittersweet perhaps, with the replacement of founding tenor Gaétan Sauvageau by the accomplished Antonio Figueroa. I was interested to see that the three other members, baritones Benoit Le Blanc, Julien Patenaude, and bass-baritone Philippe Martel, were all members of children’s choirs in their earlier years, two with Les Petits Chanteurs du Mont-Royal and the other, an alumnus of La Maitrise des petits chanteurs de Québec. It is clear that something in the musical education of these singers taught them exceptional phrasing technique in performance. For this is exactly what makes this recording of pure Gregorian chant alternating with Palestrina’s polyphonic settings remarkable.

Palestrina composed in what Monteverdi referred to as “prima prattica,” a “stile antico” of pure counterpoint in deference to an earlier era. Palestrina’s elegant curves of sound and long-breathed melody never detract from the original character of Gregorian chant on which his compositions are based. He imbued the melodies with vitality by incorporating rhythmic irregularities and clean sonorities with a few well-prepared dissonances to reflect textual nuance. He was the master of creating polyphonic textures that have distinct clarity. Therefore, his a cappella motets have a similar requirement of singers performing Gregorian chant: precision intonation and sensitivity to textual phrasing throughout – both of which are evident in Quartom’s performance, in addition to their exquisitely beautiful tone.