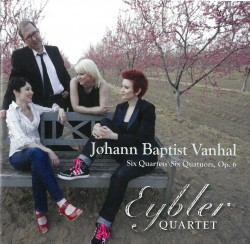 Johann Baptist Vanhal was a Bohemian composer active in Vienna. In his autobiography the Irish tenor Michael Kelly (who sang in the first performance of The Marriage of Figaro) records that he attended a concert of a string quartet which consisted of Haydn, Mozart, Vanhal and Ditters von Dittersdorf. It is a quartet one would have liked to have heard! Vanhal was also a prolific and successful composer.

The Eybler Quartet is an ensemble of distinguished Toronto musicians well-versed in 18th-century performance practice: Julia Wedman and Aisslinn Nosky, violin, Patrick Jordan, viola, and Margaret Gay, cello. It was founded in 2004 with the aim of exploring the first century and a half of string quartet repertoire. The quartet’s concerts have featured the work of Haydn and Mozart, but its main emphasis has been on bringing back the work of composers now rarely heard, such as Joseph Leopold Edler von Eybler (after whom the quartet is named) and now Johann Baptist Vanhal. These are attractive works, and they are beautifully played. They are also unremittingly cheerful (they are all in major keys) and that constitutes both an asset and a limitation. It was well worth unearthing this music, but a comparison with, say, Mozart’s G Minor Quintet or any of the mature quartets by Haydn brings out that limitation.