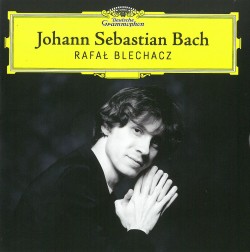 The following review is an excerpt from Keyed In (April 2017) which can be read in its entirety here.

Words fail spectacularly in trying to describe Rafal Blechacz’s performance on Johann Sebastian Bach (Deutsche Grammophon 479 5534). Playing Bach demands rigour, stamina, discipline. It also requires a profound intellectual grasp of Bach’s contrapuntal intentions. Critical too, is an innate ability to draw from Bach’s writing that unique idea that can be credibly shared by composer and performer as jointly original. In some speechlessly wondrous way, that happens on this disc.

The Partitas Nos.1 in B-flat Major and 3 in A Minor are the familiar collection of Baroque dances. They are, however, raised to a remarkable standard of exhilarating technical display, framed by tasteful expression. Blechacz plays them with emotional vulnerability and unmatched lyricism. Each set concludes with a memorably blazing Gigue.

Blechacz plays the Italian Concerto in F Major BWV 971 at a sustained speed that hasn’t been matched since Alexis Weissenberg broke the sound barrier with his recording in the mid 1960’. Still, there is striking clarity throughout the first and third movements that offers every opportunity to discern the inner counter melodies racing past each other to the final measure.

The Fantasia and Fugue in A Minor BWV 944 offers an unbelievably long and complex fugal subject that cascades through its development section with ease under Blechacz’s hands. He ends the disc with a rapturous performance of Jesu, Joy of Man’s Desiring – Dame Myra Hess’ arrangement.