Kirill Gerstein’s new recording of the Busoni Piano Concerto (Myrios Classics, MYR024, naxosdirect.com) is a mammoth production in every way. The Piano Concerto in C Major Op.39 is a five-movement work that takes more than 70 minutes to perform and calls for a large male chorus that sings extensively through the final movement. Premiered in late 1904, it displays a breadth of conception and orchestration stylistically similar to later Mahler symphonies and Rachmaninoff piano concertos. And while it predates the modern cinema by many decades, the music has a grand sweep of musical ideas for both the piano and the orchestra that conjures up epic films on big screens.

Busoni has made the piano very much an equal partner with the orchestra in this work rather than having the two engage in a contest of wills. Some of the critical writing about the concerto sees the work as the final iteration of this late-Romantic form, the end of one era rather than the beginning of a new one. But there is so much forward-looking writing in the concerto that grounds for the counter argument are very strong. Busoni’s own personal evolution toward modernism and experiments with keyboard tonality are further evidence of his contribution to music in a time of profound transition.

This disc was recorded live at Symphony Hall in Boston. Gerstein’s output of sheer pianistic energy for the duration of this enormous work is amazing. For many, this Busoni concerto will be new material, and because of its superb performance, should be eagerly acquired.

Busoni was renowned for his technique, as any who have played his transcriptions of Bach organ works will know. Massive chords, dense harmonies and seemingly impossible reaches speak to his mastery of both composition and performance. These familiar baroque transcriptions make it all the more intriguing to hear Busoni writing in a voice so firmly early 20th century.

Belsky opens the disc with Sonatina Seconda, a striking example of the composer’s inclination to challenge conventional tonality. The Nine Variations on a Chopin Prelude follow with their increasing degree of technical difficulty. The last work is the set of six Elegies, each dedicated by Busoni to one of his piano students. A curious feature of this set is the appearance of some material from his Turandot Suite. Busoni mistakenly thought the tune Greensleeves was a Chinese folk melody and used it as such in this setting (apologies still owing to Henry Tudor or an anonymous contemporary).

This disc is an important document. With it, Belsky reveals a little-known side of this composer whose original works are refreshingly innovative for their time.

A good many musical scribes have opined on the way that Liszt’s work, in the hands of the finest performers, forges a powerful single expression in which the components are indistinguishable. Composer, performer and instrument become a unified artistic force. Giltburg plays Liszt? Or Liszt plays Giltburg? Such ambiguity can only arise because of the brilliance of this performance. There is both total surrender and total control. Ambiguity and contradiction, the powerful drivers of the highest artistic experience, are everywhere in this recording. Any one of the Études could serve as an example of peerless performance but No.4, “Mazeppa” stands out for its captivating rhythm as well as the three harmonic suspensions in the middle section that add a brief contemplative moment to the maelstrom.

The Études alone would be enough to fill a disc but Giltburg also adds Liszt’s Paraphrase de concert sur Rigoletto and the second of the 3 Études de concert, S144/R2b. The Verdi Paraphrase is an example of the distance that any of Liszt’s paraphrases lie from their original material. With only the melody intact, Giltburg wraps the composer’s harmonic and ornamental creation around the operatic excerpt in a way that reimagines it as wholly new.

Andrey Gugnin has also recorded the Liszt Études d’exécution transcendante (Piano Classics, PCL10158, naxosdirect.com). This award-winning, festival-conquering young pianist plays with a towering technique. More poignant, however, is the affinity he displays for Liszt’s writing. From the very outset of the Études he plays with the single-minded conviction that the piano is no longer just a piano. Gugnin, like Liszt, is seemingly unburdened by any limitations that he or the instrument might have. Herein lies the transcendental nature of this music. The pianist’s extraordinary technique moves the music beyond conventional levels of comprehension to a richer understanding of what the sounds can actually convey. Having transcended the physical challenges of the music, Gugnin brings a mysticism to his playing that matches the composer’s, note for note. It’s the perfect pairing of master and disciple with the tantalizing promise that the student may even surpass his mentor.

Gugnin’s entire performance blazes with energy – yet his ability to retreat into the quiet moments of Paysage and Harmonies du soir is as impressive as his explosive eruptions of Lisztian genius. Feux follets displays a beautifully sustained and controlled line that runs through the piece, with unassuming determination providing the backdrop for Liszt’s main ideas.

This performance is the rare combination of youthful athleticism and an unnatural early maturity. 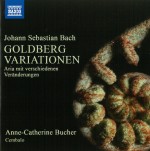 Anne-Catherine Bucher is among the latest to record the Johann Sebastian Bach Goldberg Variations (Naxos 8.551405, naxos.com). The peculiar challenges of the Variations seem to place them among the peaks that many keyboard artists want to conquer at least once in their performance lifetime. Considering the illustrious performance history of the work and the height at which that bar has been set, the undertaking can be a career risk. In this recording, however, there is no such hazard.

Bucher, an organist and harpsichordist, performs on a modern instrument by builder Matthias Griewisch. The two-manual harpsichord (cembalo) is a replica of a 1745 instrument from the workshop of Flemish builder Johann Daniel Dulcken. With three choirs of strings and at least one buff stop, the instrument offers a variety of individual and combined sounds along with opportunities to solo a voice on a separate manual with a different sound. This is something Bucher does first in Variation 7 and many times subsequently with wonderful effect. Bucher also has a profound grasp of the larger progressive structure Bach uses through the 30 variations. She makes this obvious both in her playing and in her concise liner notes.

The Goldberg Variations are, like any piece of music, a window into the soul of the performer. Choice of instrument, tempi, phrasings, etc. all say something about the player sitting at the keyboard. While Bucher’s recording is scholarly and informed, it rises quickly to gratifying levels of inspired creativity that have a lasting emotional impact. It’s a performance of thought and substance. 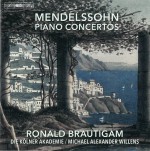 Ronald Brautigam has a new recording of the Mendelssohn Piano Concertos (BIS, BIS-2264, naxosdirect.com) in which he performs on a modern fortepiano, a copy of Pleyel Op.1555 from 1830 which is still preserved in the Paris Museum of Music. The instrument’s sound is an immediate clue to the period project in which Die Kölner Akademie also performs with period orchestral instruments, historical seating plan and critical editions of scores.

Brautigam’s instrument is remarkable. While it has the characteristically short resonance of all fortepianos, it is 244cm (8 ft.) long and offers plenty of power against the volume of the orchestra. Equally impressive is the quick keyboard response to the extremely fast passages. The Presto movement of the Concerto No.1 is an example of this amazing key action technology from 1830. It’s unlikely that Pleyel had yet developed his own double escapement action to match his competitor Érard who’d invented it just a decade earlier. But Pleyel’s hammers and actions were known to be lighter and very responsive to the need for speed and repetition. Additionally, Brautigam’s modern copy also holds its tuning remarkably well for all the rigour that Mendelssohn’s score imposes on it. The upper register in particular is beautifully pitched and voiced.

In addition to the two Mendelssohn concertos, the disc also includes his Rondo Brillant in E-flat Major, Op.29, Capriccio Brillant in B Minor, Op.22 and Serenade and Allegro Giojoso, Op.43. 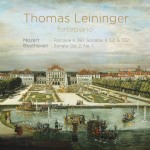 Leininger is a trained organist and harpsichordist. His recognized specialization in early music has attracted invitations for him to compose missing passages, many of them extensive, in fragmentary works by Handel and Vivaldi. On this disc, his performance of Mozart’s Sonatas K331 and 332, and Beethoven’s Sonata Op.2, No.1 demonstrates not only how such works could have sounded to their composers and audiences, but how differently phrasings, speeds and dynamics must have been understood. These period instruments respond differently to touch, produce different colours and offer a musical experience unlike what we know today.

Leininger knows his instrument extremely well. He uses the lighter, simpler mechanical action to shape the tone of his notes with great effect. His playing style uses the well-documented freedoms of tempo and ornamentation that are common for the repertoire period. An intriguing feature of this recording is the brief prelude that Leininger improvises before each of the sonatas. The production is well informed, and intelligently and beautifully played.

In 2010 Andras Schiff acquired a stunning walnut Brodman fortepiano built in Vienna ca. 1820. Brodman was one of Vienna’s finest builders whose instruments were, not surprisingly, owned by the Austrian Royal Family. The last Austrian Emperor took this one into Swiss exile with him in 1919. One of Brodman’s young apprentices named Bösendorfer in time took over the business and made it the familiar name we know today. This instrument underwent some restoration in 1965 and has been on loan to the Beethoven Haus in Bonn since Schiff took ownership. Schiff brought the instrument to London for a recital at Wigmore Hall in early 2015 where he performed a program of three Schubert Sonatas. The following year he used it to record this disc Franz Schubert Sonatas and Impromptus, (ECM, ECM 2535/36, ecmrecords.com) in the Kammermusiksaal at the Beethoven Haus back in Bonn.

Schiff’s fortepiano exhibits all the mechanical and tonal characteristics of its period: very brief open resonance, comparatively little overall power, and a unique tonal colouring that makes this recording a real gem. Each of the high, middle and low registers has its own quality. Additional mechanisms create a gentle bassoon-like buzz in the bass and a general dampening of the strings in play. But the most striking feature is the intense intimacy, the true smallness of sound that Schiff is able to create from the keyboard. Whether for historical reasons or out of pure curiosity, this recording is a must-have.