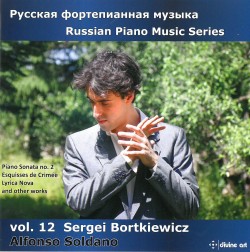 Divine Art’s growing Russian Piano Music Series has a new addition in Russian Piano Music Vol.12 – Sergei Bortkiewicz (dda 25142). It features Italian pianist Alfonso Soldano playing the music of Bortkiewicz (1877-1952), who produced a substantial body of works, both large and small scale. The majority was for piano but he also wrote for violin, cello and piano trio. He opposed modernism and evolved his musical language using the vocabulary of the late 19th century. He demonstrated unwavering adherence to melody, harmony and structure. His piano writing reveals an affinity for Chopin and Liszt, yet there are occasional, if brief, references to 20th-century harmonies and resolutions of popular nature.

Pianist Alfonso Soldano takes on this music for what it plainly is, a form that refused to budge with the changing currents of its time. What emerges is not an apology for the music but an argument for its credibility. Soldano argues from the keyboard, that Bortkiewicz had a voice of his own, that subtly reshaped the familiar late Romantic sound. Bortkiewicz placed great importance on how his inner voices moved to create a richness of colour too often lost to virtuosic imperatives.

While this is evident in the short pieces on this disc, the Sonata No.2 in C-sharp Minor Op.60 is where the composer truly shows his respect for structure, applying his unique subtleties to show us that the late Romantics may have given up too soon.