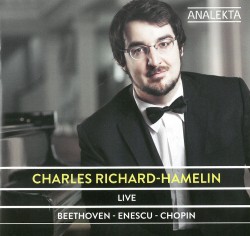 The following is an excerpt from Keyed In (November 2016) which can be read in its entirety here.

Quebec-born Charles Richard-Hamelin has added a second recording to his discography. Recorded in May this year, Charles Richard-Hamelin Live – Beethoven; Enescu; Chopin (Analekta AN 2 9129) opens with two Rondos by Beethoven. Because the pieces are so very Classical, they tend to be overlooked in favour of his later, more potboiling audience pleasers. Richard-Hamelin raises the emotional bar on these early works and plays them as Romantic flirtations. It’s very effective.

George Enescu’s Suite No.2 for Piano Op.10 dates from the turn of the 19th century and uses some surprisingly contemporary harmonies. Richard-Hamelin plays these short dance pieces with affection for the graceful nature of the suite’s four parts. Each is uniquely coloured. Pavane, especially, has a dark introspection that Richard-Hamelin explores with intimacy.

He uses the same inclination to begin the Chopin Ballade No.3 in A-flat Major Op.47 but rises to all the grandeur required as the Ballade builds to its finish. The following Nocturne in E-flat Major Op.55 No.2 requires getting deep inside Chopin’s intentions as he shifts tonalities and layers ornaments over very simple thematic ideas. Richard-Hamelin demonstrates a genuine understanding of this music and reveals more of its inner secrets in a gratifying way.

The recording concludes with Introduction and Rondo in E-flat Major Op.16 and the Polonaise in A-flat Major Op.53 “Heroique”. Each is a cauldron of technique but “Heroic” stands out for its less than traditionally punctuated phrases in favour of a more fluid approach.