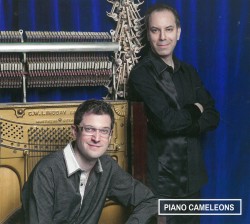 The following is an excerpt from Keyed In (November 2016) which can be read in its entirety here.

Fusing Classical and Jazz has been done before and its success always depends on the calibre of the musicianship brought to the keyboard. A new recording, Piano Caméléons (Justin Time JUST 257-2) features pianists Matt Herskowitz and John Roney recasting many of the classical repertoire’s best known melodies in a jazz voice. The project boasts Oliver Jones as its guide and mentor, and Jones writes glowingly about what the pianists have achieved. Jones also performs with them in the Minuet in G Major BWV 114 by Bach/Petzold.

The opening track uses the Bach Prelude No.2 in C Minor from the Well-Tempered Clavier, Book I. After establishing key and rhythmic pattern, Herskowitz and Roney begin drifting from Bach’s melody into a descant that eventually develops into a catchy swing embellishment, all the while maintaining the original pulse of Bach’s keyboard idea. Very clever.

With Debussy’s Claire de lune, the approach changes. Here they use only the briefest motif from the opening measures and spend more creative effort sustaining the piece’s atmosphere. They never let go of the thematic fragment entirely, although they wander significantly before quoting it again at the close.

Rachmaninoff’s Prelude in C-sharp Minor Op.3 No.2 introduces some mysterious percussion at the outset, remains dark and ominous throughout and offers an impressive display of technique from both keyboards.

The track that emerges as a truly brilliant conception and performance is the Chopin Étude in C Minor Op.10 No.12 “Revolutionary.” Starting with the familiar cascade of the work’s first idea Herskowitz and Roney create the turbulence of the “Revolution” and stay with its minor key almost entirely through their jazz treatment. It’s ingenious and impressively creative.