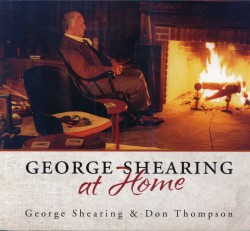 Just a few jazz musicians have become household names while managing to retain their artistic integrity. Dave Brubeck, largely due to Take Five and Duke Ellington aided by Satin Doll reached that level of recognition, as did Mr. Shearing helped along by his Lullaby Of Birdland — but although each of these three pianists reaped some reward from the success of having a composition recognised by anyone interested in popular music, they remained true to their ideals.

I’ve seen George Shearing many times over the years and he always managed to bring a certain intimacy to his performance whether it was in a small club or a large concert hall. Well, this CD has to be the ultimate in intimacy in that it was recorded in his own living room. With him is his close friend and musical partner, Don Thompson Together they have created a little gem.

From the opening bars of I Didn’t Know What Time It Was, played at a lovely loping tempo, you know that you are in for a musical treat. There are 14 selections on the album ranging from ten superior standards to a Don Thompson original, Ghoti via The Skye Boat Song and a couple of bebop lines by Charlie Parker and Lee Konitz.

An interesting point for me is that six of the numbers come in around the three minute mark, a pleasing reminder of the days of 78s when you had to tell your story within a limited time frame — lovely musical stories these two masters spin.

Highly recommended and well worth adding to your collection.