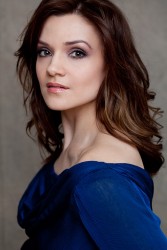 Music Toronto has always specialized in piano recitals and in concerts of chamber music, particularly string quartets. Once a year, however, the organization offers a vocal recital. These recitals are part of Music Toronto's Discovery Series, oddly, perhaps, since many of the singers featured, like the soprano Erin Wall (in the 2012/13 season) or the baritone Phillip Addis (in the 2013/14 season) do not need to be discovered any more. I think this is also true of Andriana Chuchman,  although most of her performances have taken place in western Canada or in the United States (including four appearances at the Metropolitan Opera in New York as well as several performances with the Lyric Opera of Chicago). She was a student at the Ryan Opera Center in Chicago and also at San Francisco Opera's Merola program. She has not appeared in Toronto often, but I have vivid memories of her stunning Olympia in Tales of Hoffman for the Canadian Opera Company a few seasons ago.

Chuchman chose a demanding program for her January 21 recital at the St. Lawrence Centre. It included songs in five languages (German, French, English, Russian, Ukrainian) – six if one counts the Puccini encore. She began with four songs by Robert Schumann, in which there was passion but also restraint. These were followed by two of Henri Duparc's greatest songs (Chanson triste and L'invitation au voyage) which were impassioned and not at all restrained. The first half of the program ended with Pat Nixon's monologue from Nixon in China by John Adams, a soliloquy which gave us a very different aspect of Chuchman's artistry.

Chuchman is proud of her Ukrainian heritage and has often said that it is that heritage which makes her singing distinctive. I think it would be difficult to pinpoint that influence but there is no doubt that she was at her very best with the Slavic songs that comprised the second half, both the Russian romances by Tchaikovsky and the more modern Ukrainian songs which closed the recital.

Craig Terry, the pianist, is the music director of the Ryan Opera Center and an assistant conductor at the Lyric Opera of Chicago. He has collaborated with many eminent singers and has recorded with three of them (Patricia Racette, Stephanie Blythe and Nicole Cabell). The support which he gave to the singer was exemplary.