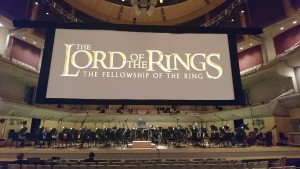 The Lord of the Rings: The Fellowship of the Ring premiered in Canada on December 19, 2001. That year I started high school and it was the first time I took a music class in a real music program. That Christmas, one of my friends gave me the soundtrack for the movie. I fell in love with it and have loved it ever since. For me, my entire musical history has been inspired and shaped by this soundtrack. With “The Lord of the Rings: The Fellowship of the Ring In Concert” at Roy Thomson Hall, December 1 to 3 with the Toronto Symphony Orchestra and Toronto Mendelssohn Choir, I’ve been able to perform the film’s music onstage as a chorister. It has been one of the greatest privileges of my life as a musician.

The Toronto Mendelssohn Choir’s scores arrived early in the season and we rehearsed the choral portions from early October. As prepared as we can try to be with entries at this stage, once we join the maestro and the orchestra during the week of the show, the whole game changes. This is when the real work begins.

This Monday through Wednesday were our rehearsals at Roy Thomson Hall. The instrumentalists and choir rehearsed separately until we combined on Wednesday evening. Our dress rehearsal, Thursday afternoon, was the first time the entire production was put together. The Thursday performance was only the second time we’ve ever completed the full production. At time of writing, two more performances are ahead.

This is not easy music. Entries are sudden and challenging. Often, the choir comes in after a long pause or break with no reference for the starting note or chord, and the texture gets thick in the writing, with cluster chords of three or four notes per section. And as choristers, we are working diligently, even if we’re sitting and waiting – paying attention to cues for standing up to sing. The Canadian Children’s Opera Chorus is also part of this production, and they spend a good chunk of the movie just waiting. Those talented kids are patient.

For productions like this one, the chorister sheet music doesn’t have a full score of what is going on among the instruments or on the film. Our scores contain the vocal parts and an orchestral reduction, and we rely mostly on aural cues – this trombone part, or that sound, or this entry from the violins – to know when specific things are meant to happen, like when to stand. Making a road map of sounds and cues is an important part of being a good chorister. (One of my cues is Frodo gasping!)

There are big pieces in the soundtrack that require stamina, concentration, listening and excellent technique. The male voices have the hardest and longest section of choral singing in the entire score – Khazad-dûm. Onscreen, there are Orcs, Balrogs, crumbling staircases, pulling of beards, Gandalf falling, all sorts of things. Chances are likely you’ll hear the taiko drums, the bass drum, brass chords, and most of all – the anvil. Used together, these instruments give an effect of military precision, danger, heartbeats, unsettling fear and heroism, sometimes all at the same time. Cutting through all this noise are the voices of the men. “Articulation is the way through the orchestra,” says Ludwig Wicki, the conductor. So we articulate our Orcish “Hu” and “Lu”.

Wicki, from Lucerne, Switzerland, is a wonderful maestro. His ear for the music and for specificity is unlike any other I have ever worked with. He is precise and consistent and incredibly good at getting what he needs. Where most would hear a massive dissonant cluster chord, he hears an A-flat that is under pitch. Where most would hear a beautiful horn line, he hears a missing D. He’s quite amazing.

I appreciate a conductor who values film music. Wicki demands accurate pitch, correct vowel placement, dynamic range and expressivity – everything you’d expect from a choral masterwork and more. Because the languages Tolkien invented in The Lord of the Rings – Quenya, Dark Language, Dwarvish, and more – are unknown to us, choristers are not quite sure how to sing them. Wicki tidies this up as he rehearses, changing sounds to match what is needed. He is demanding because this is not music that one coasts through; this is challenging work that keeps even experienced choristers on their toes.

Wicki specializes in contemporary film scores, especially live film concerts. He was the first to conduct The Lord of the Rings trilogy in this format. Wicki also understands what composer Howard Shore has created. “He has created a special language. Two composers have done this, [Ennio] Morricone and [Howard] Shore,” says Wicki. There's also a Canadian connection; Howard Shore is Canadian.

With three sold-out performances, there are several thousand people who will have been able to say they experienced the Lord of the Rings film concert experience. For any live film concert series you see, buy tickets early; they often sell out. Stay tuned to www.thewholenote.com and we’ll keep you apprised.

“The Lord of the Rings: The Fellowship of the Ring In Concert” is in Toronto at Roy Thomson Hall from December 1 to 3, in three sold-out performances featuring the TSO and Toronto Mendelssohn Choir. For more information on this and other film music shows in Toronto this season, check out Brian Chang’s November choral column for the magazine.