Have you ever thought about learning to play a musical instrument but never got around to it because you were too busy with work or family activities? It’s never too late. If you are retired or pondering about what you will do when retired, taking up a musical instrument might just be the entry into a new phase of your life. You may have taken piano lessons and enjoy playing to entertain yourself, but that can be a solitary pastime. Playing in an ensemble could open up a new social dimension to your life as well.

Last fall Wholenote reported on the formation of two new community ensembles for beginners, or those reconnecting after many years away from music. Now, less than nine months later, both of these groups have developed to the stage where they are presenting inaugural concerts this spring.

Most recent medical research indicates that one of the keys to a healthy and fulfilling life in retirement is to keep active. In particular, it is crucial to keep the brain challenged. What better way to do that than to learn to play a musical instrument in a non-threatening situation with a group of like minded individuals who soon become part of a new social circle. For both of the groups mentioned the socializing and sharing of treats during the break in rehearsals has become an important component of their transformations into the world of performance. Visit one or both of these concerts and see what you might do with music in under a year.

The New Horizons Band, organized by Long and McQuade Music and directed by Dan Kapp, will be performing at the CBC Glenn Gould studio Thursday, May 19 at 7:30 pm. This is a full concert band which has grown to almost 50 enthusiastic members. This first public performance is appropriately titled “The Beat Goes On.” For information Phone 416-531-4506.

The other beginners’ group is Resa’s Pieces Strings, organized by Resa Kochberg and directed by Ric Georgi. Their “Gala Debut Performance” will take place Sunday, June 5 at 7:30 pm at the Richmond Hill Centre for the Performing Arts, 10268 Yonge Street. As the name implies, this is an all string orchestra. If trumpet or saxophone are not your thing, then perhaps a cello or viola might be more to your liking. For information go to www.strings.resaspieces.org. 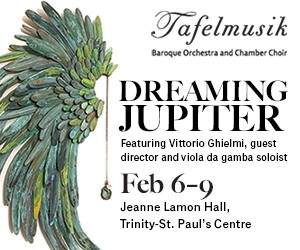