As I sit down to produce this column I realize that we are dealing with the autumnal equinox. That means the official end to summer, or beginning of autumn. To be more precise, right at the time this issue is going to the printer, the official equinox will be occurring, at 4:02pm on Sunday, September 22. (Musicians aren’t always the only ones working on weekends.) In other words, even though there has been some beautiful weather, fall is here and it’s time for much new music making. That being said, while we have some information on what lies ahead in our musical world, so far my notes are still a bit of this and a bit of that, so I think that I’ll just consider this month’s column as Variations on a Non Existent Theme and dive right in.

Happenings in my own personal musical world might be a place to start. Some days ago I came across a bulletin mentioning an open house at a local Masonic Lodge for local citizens to learn about how Freemasons have been part of our communities for centuries. One component of the emblem of Freemasonry is the square, one of the earliest working tools of craftsmen. It was, and still is, used to confirm the accuracy of right angles. Hence “Acting upon the Square” is a familiar metaphor for square and honest dealings with others.

So what does all of this have to do with music? As I looked at this emblem, I remembered hearing that there was a march titled On The Square based on some ceremonies of Freemasonry. Where to get information on this march? Where else but to Google! There it was, played by a number of different bands. I chose to listen to the version by a Band of the Royal Marines. For a few days after that I could not get that music out of my head. I had a chronic earworm. Then, a few nights later at a band rehearsal, what was the very first number that the director chose to rehearse? On The Square. Now that earworm was firmly implanted in my head, so it was time to confirm just what an earworm really is. Off to Wikipedia I went. There were a number of other terms, but the definition I liked there was “involuntary musical imagery,” where a catchy piece of music continuously repeats through a person’s mind after it is no longer playing.

How to stop an earworm? Initially I thought that there should be an “ear bird” like a robin that liked eating worms. Off to Wikipedia again. “Scientists at Western Washington University have found that engaging one’s working memory in moderately difficult tasks (such as anagrams Sudoku puzzles, or reading a novel) is an effective way of stopping earworms and of reducing their recurrence.” That’s great, but working on a Sudoku puzzle while driving, or reading a novel is a bit risky, I’d say. Several days later, On The Square still frequently returns to my brain. My decision so far: live with it; just try to let a whole library of tunes worm their way into my brain so I can change channels for variety.

For those interested, On The Square was composed by Frank Panella, a clarinetist in the Pittsburgh Symphony, sometime in the early 1900s. It is a very fine march and worthy of inclusion in a band’s library. And for any of you out there who have surefire cures for earworms, I am all ears!

From the files of Johann Cluttermeister

Once again, this month, I morphed into my occasional household “alter ego” of Johann Cluttermeister. This time I found an envelope postmarked May 21, 1973 “from the desk of Murray McEachern” in Mentone, California, promoting a new release of three records titled Music for Sleepwalkers Only. In the listing of selections in Vol. II of these records I was familiar with all of the selections, but the one tune that struck a chord with me was Too Little Time; written in 1950 by Henry Mancini, Too Little Time was the main theme in the 1954 movie The Glenn Miller Story. It was then off to my record collection to play my copy of this tune, (made early in the year 2000 by a band where I was a member). It did not get rid of my earworm, by the way, but at least I now had two different numbers in my earworm library. 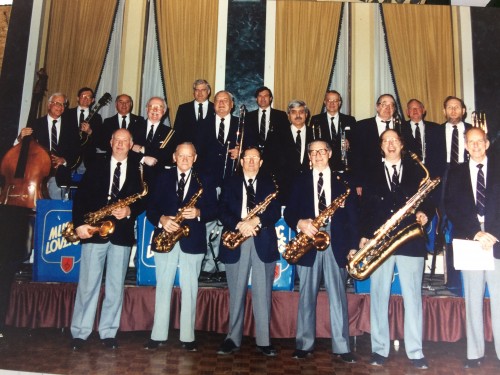 The trouble with my Cluttermeister collection is that no sooner do I get rid of something in it, than something else comes along that needs to be added. I was recently presented with a photograph with personal relevance for me. A friend of a friend had found the photo in a pile destined for the scrap heap, and thought that it might interest me. It was of swing band called The Music Lovers, all decked out in blazers and gray flannel pants in a ballroom of the Royal York Hotel. Of the 17 members, I was only able to name three, other than myself! There I am, back row, far right! Adding a single photo to my collection of memorabilia shouldn’t be a problem, you’d think. Well, this case is a bit different. This full-colour photograph just happens to be three feet wide and two feet high mounted on 3/8-inch plywood. It won’t fit in any album here, and there isn’t any suitable wall space to hang it up.

One of my favourites in the world of classical music is Mozart’s Rondo Alla Turca. (one of many different spellings). While I have a recording of that work, I also have among my memorabilia an old Dixieland version with the name Mo Zart’s Turkey Trot. So much, for now, for the Cluttermeister collection.

More on my beef about bugle music on trumpets. On June 6 this year I attended a ceremony on the street in front of the home of a man named Fred Barnard to commemorate the 75th anniversary of D-Day. Fred was one of only two or three men, from The Queen’s Own Rifles regiment, still living, who landed on Juno Beach in Normandy in 1944. Two months later I attended Fred’s funeral service. At the funeral there were many members of his regiment and the regimental association. During the service in the chapel there was the customary playing of The Last Post by a bugler at the rear of the chapel. I was stunned when I heard the first notes of this. I was hearing a real bugle, not a trumpet. There, in full uniform, was the bugler from The Queen’s Own Band playing on an excellent new bugle. It had been a very long time since I had heard such a beautiful tone and flawless playing.

I had to learn more about this bright silver bugle. A few weeks later I visited a rehearsal of the Band of the Queen’s Own Rifles at Moss Park Armoury and chatted with the man who played that bugle. It was not the old traditional copper instrument with brass trim around the bell. This was a bright silver instrument, and the big feature for me was that it uses a standard trumpet mouthpiece. One of the problems with the tradition copper bugle is that the mouthpiece has a very different shank than a trumpet. Consequently, most trumpet players are reluctant to play bugle calls on an unfamiliar mouthpiece. In this case any trumpet player just uses their regular mouthpiece. It’s a win - win situation. My next question was: where did they get this excellent bugle. All I have found out so far is that this bugle was made to order locally. I hope get more information on that soon and will pass it on to you when I do.

Looking over information on recent and planned future concerts, it seems that they are now the usual standard format. In the past few months I’ve encountered such themes as: “Music based on Bach,” “A Night at the Oscars,” and “A Night at the Cinema.” Christmas is still too far away to to be rearing its head just yet. Halloween, though, is getting the definite nod. A recent flyer from the Markham Concert Band is for three concerts, all with themes. The first, on October 30 is “MCB’s Hallowe’en Party.” Then, on Sunday, October 27 the Wychwood Clarinet Choir will perform their fall concert with the theme “Creepy Clarinets.”

Programming themed concerts solves some problems, but also poses some dilemmas. In programming who are we trying to please, the audience, the conductor or band members? For band members at least, the limitations of library contents can become an issue when all the music on the chosen theme is at one level of difficulty.

Of the concerts on the near horizon that we have heard of, only one really states what an audience can expect. On Sunday, October 27 at 4pm The Wychwood Clarinet Choir presents “Creepy Clarinets” featuring Humperdink’s Overture to Hansel and Gretel; Moussorgsky’s Baba Yaga’s Hut and Great Gate of Kiev; Henry Mancini’s The Pink Panther; and Grieg’s In the Hall of the Mountain King. With artistic director Michele Jacot conducting, this should be a very entertaining afternoon at the Church of St. Michael and All Angels, 611 St. Clair Ave. W. in Toronto.

Speaking of creative thematic programming, elsewhere in the band community, we have received sad news from Henry Meredith who officially announced just the other day that he has made the decision to suspend the Plumbing Factory Brass Band indefinitely. This band has presented nearly 60 different programs over the last two dozen years. This will be sad news for Brass Band fans. There will be no PFBB next season. As for the future, who knows? Henry himself certainly has a lot of musical irons in the fire. For one thing, there is his huge instrument collection which needs proper cataloguing if he is to find the museum home for it that it richly deserves. We’ll follow this next chapter in “Dr. Hank’s” life with interest, and report back.

Following are upcoming concerts we know about. Only the bare bones are here. All the details can be found in The WholeNote’s listings sections.

OCT 15, 7PM: Barrie Concert Band. Musical tribute to the veterans of the Canadian Forces and to those currently serving abroad or at home. Entertainment by the Skyliners’ Big Band will follow tribute. Royal Canadian Legion Branch 147, 410 St. Vincent St., Barrie.