As I sit down to write this September column (the beginning of my 14th year), it’s the usual dilemma. Should I start with the events of the summer about to end, or the fall just over the horizon? And what about summers past? I think I’ll start there.

In case you haven’t been around to notice, outdoor concerts have changed. Having worked for many years as master of ceremonies at a variety of summer band concerts, I remember well concerts every Sunday, sponsored by Toronto’s Parks and Recreation Department at the Beaches Bandstand and in High Park, with concerts during the week at Allan Gardens and St. James Park.

My own summers usually ended, back then, operating the “world’s first” outdoor stereo sound system on the main bandshell at the CNE. My first season there was working with the late Sir Vivian Dunn and the Band of the Royal Marines, Plymouth Division. On another occasion, the National Band on New Zealand was featured. During the times when the featured band was not performing on the main bandshell, there were concerts on the CNE’s north bandstand by various bands from local Army and Navy Reserve units.

It has probably been some years since there have been such events with major feature bands at any outdoor facility in the Toronto area. However, community bands all over the province have been performing at a wide range of performance venues ranging from such large dedicated facilities as the Millennium Bandstand in Unionville (built in 2000) or the Rotary Aqua Theatre in Orillia’s Couchiching Park (built in 1958), to grassy areas in public parks. In the cases of the more formal bandstands, most usually have some limited seating and lots of space for audience members to bring their own seats.

Lest I start to sound too nostalgic, I should point out that while the more informal concerts on grassy lawns may be pleasant for audience members, they are not necessarily so for band members. Other than bad weather, problems can include uneven terrain for members to place chairs and music stands, bright sun in their eyes, winds to blow the music off their stands and the logistics of getting large instruments to and from the parking area to the performance site.

Just as there is much less formality in the venues, so too there is now a wide range of the delivery of the music, the dress of band members and conductors, and the means of announcing the music and soloists. During this past summer I have seen attire ranging from bands with everyone wearing rather formal uniforms with shirt, tie and band blazer to groups with shorts and a wide variety of tops.

As for audiences, times have also changed. Cell phones scattered throughout the audience are common as is the eating of treats. The photograph with this column is a case in point: the Encore Symphonic Concert Band at the Millennium Bandstand in Unionville, in garb that does not really match their prestigious name. And at least one audience member trying hard to let the music distract him from his ice cream. 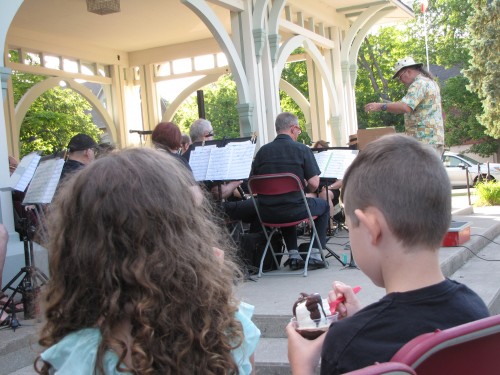 Summer repertoire has evolved as well. Years ago, bands always played at least one march by Alford or Sousa. Of all of the concerts this summer, where I either played or listened, there was not a single march. All of which brings up a favourite topic of mine: repertoire. Should it be purely based on the preferences of the conductor, the skills and interests of band members, or what they hope will appeal to their audiences on a given day? Two recent concerts were a case in point: as is popular these days one was thematic, with the title: “Music of the Cinema, Popcorn Not Included.” The other concert did not have a specific title, but was made up either of Beethoven music or music inspired by Beethoven. After the latter of these concerts, I asked a man how he liked the program. His reply: “Why would a band play Beethoven at an outdoor concert?” When asked what he would prefer, he stated that it should be obvious: “A band outdoors should be playing Sousa marches.” All of which brings up that recurring theme: “You can please some of the people some of the time, but you will never please all of the people all of the time.”

At some time every summer, I morph into my occasional household alter ego, Johann Cluttermeister, and start digging through many boxes of “sometime I must get around to it” stuff. I uncovered a few musical gems. The first was an advertisement from the Stratford Festival of a few years back, for a performance of H.M.S. Pinafore. There he was, a sailor in the uniform of the United States Navy, embracing a sweet young lady. What, pray tell, was an American sailor doing in a story aboard a Royal Navy ship?

Then it was music for a lesser-known bugle call, The First Post. Most people are familiar with The Last Post, but how many have ever heard of The First Post? Having served many years ago in a large Royal Navy ship, which was the Admiral’s Flagship, I became acquainted with many bugle calls. We had a full Royal Marine Band with many buglers aboard. We heard a multitude of bugle calls every day to announce certain routines. The First Post was one of these. And there it was, the music for this little-known bugle call! Off to Google I went. I typed in “bugle call The First Post.” Almost immediately, I heard this call played in its entirety as I followed it with the sheet of music in front of me, after which to my surprise and pleasure, I was treated to a succession of many British bugle calls.

Into another box, and out came a true gem: a well-worn small book of music, titled the Universal Band Primer. “The indispensable and VERY FIRST BOOK for all Young Bands” it proclaimed. Published by Hawkes & Son in 1912. Price: one shilling and sixpence. The first page covered the “Rudiments of Music” and consisted of a stave with the comparative value of notes and rests: wholenotes, half notes, quarter notes, etcetera, except that here they are called, respectively: semibreve, minims, crotchets and so on, down into quavers, semiquavers and demisemiquavers. As for the instrumentation: there are books available for saxhorns, G bass trombones and bombardons. It seems that there have been some changes in the band world over the past century.

Usually, around this time of year, I received considerable information on band activities over the summer months. This year, not so, but with one notable exception. Joan Sax of the Richmond Hill Concert Band wrote to inform us of a concert series at a new venue: during the months of July and August, the Richmond Hill Concert Band presented “The Lake Wilcox Summer Concert Series” Sunday afternoons at 1pm on the Oak Ridges Community Centre terrace. These featured the five concert bands of York Region: the Aurora Community Band, the Thornhill Community Band, the Richmond Hill Concert Band, the Markham Concert Band and the Newmarket Citizens Band. Playing in one of these concerts gave me an opportunity to tour this new community centre adjacent to Lake Wilcox. It is an excellent and much-needed new facility with too many features to describe here. If I ever needed a reminder of how things have changed over the years, though, this was it! Some years ago, as a young boy living in Windsor, Ontario, with a population then of 100,000, I occasionally visited the little village of Richmond Hill. On my way to this community centre, we passed a sign welcoming us to the City of Richmond Hill, population 208,000.

Also by this time in past years, I would start to get notices of future band activities. This year I have not received a single notice of any coming events yet! If you, as a reader, are a member of a band, we would love to be informed of any coming events. For me to make mention of them in this column, we generally need them no later than the fifteenth of the preceding month.

Earlier this year, we attended a ceremony at Toronto’s Nathan Phillips Square, where members of HMCS York, Toronto’s Reserve Naval Division, were commemorating the annual Battle of Atlantic Sunday. We were astounded to see six or eight members of the band in formal army uniforms. How could this be? It turns out it was that time of year where many communities were experiencing serious flooding and needed people to fill and position sandbags, and several band regular band members were away on extra emergency duties doing so. Members of one or more reserve army bands had therefore the HMCS York band’s ranks to form an unusual Red and Blue ensemble.

Question: What’s musical and handy in a supermarket?
Answer: A Chopin Lizst.

Question: How do you get a million dollars playing jazz?
Answer: Start off with two million.