Since we haven’t seen any snowflakes for two weeks, it is probably safe to assume that spring is here, and that summer won’t be far behind. But that being said, it is also true that this will be the last issue of The WholeNote until the September issue by which time fall will be looming. So there is a lot to cover here, and a lot that will likely fall through the cracks. While we frequently hear talk of the “paperless society,” it isn’t here yet, and probably never will be. For The WholeNote, as with any other paper publication, that means that there must always be a gap between the time when all of the final copy is written and the day when the first paper publication is available for our readers. A number of events will take place during that gap. I hope to attend several of them, but they will already be past history by the time you read this, and long gone by the time I report next. I will take notes as I go, though.

In recent years there has been much talk about the demise of the “town band” insofar as the traditional concert in the park and/or parade of the town band. Yes! Developments in technology have certainly changed much of community music. On the other hand, some bands have embraced these developments to further their bands’ connection with their communities. Two such situations have come to my attention recently. 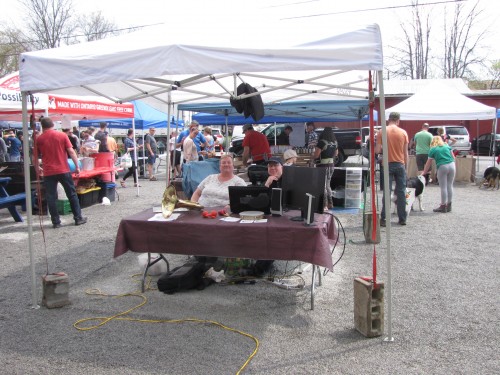 The first of these, by the Uxbridge Community Concert Band (UCCB), was an unusual way for a band to connect with their community. This band, a summertime-only group, had a unique way to contact citizens of Uxbridge. On the seasonal opening day of the town’s Summer Farmers’ Market, the band had a display stand with a dual purpose. One: Invite any potential members to consider joining the band. Two: Invite anyone passing by to attend UCCB summer events. One feature of their display was a laptop computer with a large screen and loudspeakers showing the band in one of its concerts. The photograph here shows the band’s membership chair, Terry Christiansen with her French horn and conductor Steffan Brunette with his computer.

Speaking of the UCCB’s Steffan Brunette, a couple of years ago, he took a year off from teaching and studied composition and this summer’s repertoire will include the premiere performance of a new composition of his with a very unusual inspiration. Brunette is recovering from major surgery and has appointed two assistants to conduct rehearsals at times when he may not be able to do so. Well, while recovering in the cardiology ward of St. Michael’s Hospital in Toronto, he conceived this work. In his words: “The beeping of a specific heart monitor (on an F-sharp, in 5/4 time) throughout the day and night became the inspiration for the basis of a new piece.” This summer, audiences will be treated to the world premiere of Tachycardia.

The other town band innovation I want to mention here is by the Newmarket Citizens Band. The band has had a YouTube channel for about three years now, and have just announced that they currently have 43 videos posted on the channel – audio recordings of their performances from several of their various concerts that have taken place during that period. One, in particular, jumps out as having received exceptional numbers over a short period of time. Since being posted last August, The Lord of the Rings by Richard Saucedo, recorded at the Orillia Opera House, has had over 1200 views. That’s the most for any of their posted videos!

I heard recently from Heather Engli about a big move on the horizon for her. I first met Heather many years ago when she was a music student and trumpet player at university. Years later, when we moved to Goodwood in Uxbridge Township, there was Heather, and she had stopped playing trumpet. A few years later, she was back playing and teaching trumpet. For some time now she has been my principal contact with The Silverthorn Symphonic Winds. Very soon Heather will be moving to Wolfville, Nova Scotia where she may even study more music at Acadia University, and she has already made contact with Dan and Lisa Kapp who moved there a couple of years ago, she informed me.

Dan Kapp, as regular readers of this column will know, was the driving force behind the first New Horizons Band of Toronto in 2010, when they started with one band made up of 19 adults, who had either never played music before, or who wanted to return to music after having played in high school. The qualifications for becoming a member were simple: you had to love music and be willing to do your best. “I will never forget my first practice” said Randy Kligerman, who is now president of NHBT. I too remember it well: a call from Dan Kapp, telling me that the first NH band did not have any trombones for their very first concert, I took action. I dug out, not one, but two trombones. One was for myself. The other I handed over to Joan, “the lady of the house,” and stated that “we are the trombone section.” I thought that Dan was being more than ridiculous to schedule that very first concert for a new beginner band to take place in the CBC’s Glenn Gould Studio. I was wrong. The concert was appreciated and applauded by a full-house audience.

NHBT has since grown to approximately 260 members, with eight concert bands and two jazz bands, and offers a variety of mini-enrichment programs throughout the year. Initially they rehearsed in a studio space at Long & McQuade in Toronto. When they outgrew that, they were able to rehearse at the Salvation Army location at Bloor and Dovercourt. Again they have faced an enviable problem, many more people wanted to join NHBT and enrich their lives with music, but the bands had outgrown the space availability at their current Bloor and Dovercourt location. “We are a difficult tenant” said Kligerman, “ We have day and evening classes, require a band room with good acoustics and lighting, and many of our members prefer not to drive, so access from the Bloor Subway line is a priority. Not an easy thing to find in Toronto, especially at a rent we could afford.” After looking at numerous buildings and churches, Kligerman visited the Seicho-No-le Centre, at Danforth and Victoria Park. He knew this would be their new home as soon as he walked in. “The building is beautiful and has all the amenities we need, and our new landlords are welcoming and supportive of what we do with the community. Everyone is excited about what the future holds for NHBT, and most importantly, we can continue to grow as an organization,” said Kligerman.

The Markham New Horizons Band is one that I had not heard of before, but met them for the first time recently. As a member of New Horizons International Music Association, the band serves as an entry access point to music making for adults, with or without musical background, and for those who have missed playing. They practise at Long & McQuade, Markham (9833 Markham Road) every Tuesday from 1pm to 3pm. During my brief visit, it became apparent that they would love to welcome some “low brass” members. For information contact their conductor Soah Lu at markhamnewhorizonsband@gmail.com.

The Canadian Band Association (Ontario) just announced their next Band Weekend. It will take place from June 14 to 16 in Barrie and be hosted by the Barrie Concert Band. For those not familiar with these events, the CBA Weekend brings together musicians from community bands across the province to join together for a challenging, but fun couple of days of music making. Under a number of different guest conductors, attendees will rehearse all day Saturday. That evening is a time for people to socialize. Then on Sunday afternoon, all will come together as a massed band to perform in a public concert. If you or your band have CBA membership, you will receive all information needed to register.

Over the years we have usually received information on concerts at a number of outdoor venues in Southern Ontario. So far we only have information on the Orillia Sunday evening Concert Band Series. These all take place on the Orillia Aqua Theatre in a park on the shore of Lake Couchiching. If the weather is bad, the concerts are automatically moved to the Orillia Opera House. This year’s lineup: June 23 - Orillia Concert Band; June 30 - Baytowne Big Band; July 7 - Weston Silver Band; July 14 - Orillia Silver Band; July 21 - Newmarket Citizens Band; July 28 - Barrie Skyliners Big Band; August 4 - Muskoka Concert Band; August 11 - Mississauga Pops Concert Band; August 18 - Simcoe County Band; and August 25 - Markham Concert Band. So far we have not heard anything from The Millennial Bandstand in Unionville or the Civic Bandstand in Oshawa.

A community choir was plagued with attendance problems. Several singers were absent at each rehearsal! As a matter of fact, every singer in the choir had missed several rehearsals, except for one very faithful alto! Finally at the dress rehearsal for their big concert, the conductor took a moment to single out and thank the faithful alto. She, of course, humbly responded, “Well it’s the least I could do, since I won’t be able to make the performance!”