As this past winter dragged on interminably I started finding myself singing to myself Spring Will Be a Little Late This Year, and began to ask fellow musicians to play the tune, only to learn that I could not find anyone who had ever even heard of such a song, which was very popular some years ago. Such is progress! Finally, one day after the vernal equinox, a cheery robin said hello to me from a tree in the back yard. Had spring arrived? Yes, but only for a day. The snow and ice were back. So: what will the bands be doing this spring when it really arrives?

Wee Big Band: It turns out that there are some spring programs on the horizon, but there are also a number of anniversaries. In fact, I have already had the pleasure of attending the first of these a couple of weeks ago when Jim Galloway’s Wee Big Band celebrated their 40th anniversary with a special performance at The Garage at the Centre for Social Innovation, 720 Bathurst Street. This was presented by the Ken Page Memorial Trust and WholeNote Media Inc.

Formed in 1979 as a repertory band specializing in the music of the great bands of the swing era, Jim Galloway’s Wee Big Band, with Rosemary Galloway on bass, continued until Jim passed away in December 2014.

In the recent concert almost all of the selections were arranged by Martin Loomer, the current guitarist and leader. On a number of occasions Martin mentioned, with fond memories, the performances of saxophonist Gord Evans who had been a member of the band until he passed away a few years ago. The first thing that I did when I arrived home after the concert was to play a recording of Gord playing Sammy Nestico’s Lonely Street on alto sax. That is my favourite number on a CD recorded about 20 years ago by a group that I was in. On looking over the list of members, at least six others beside Gord are no longer with us.

Wychwood: Another anniversary coming soon is that of the Wychwood Clarinet Choir. On Sunday, May 26 they will be celebrating their tenth year of concerts. Founded and led by clarinetist Michele Jacot, they now have over 200 pieces in their music library and over half of those are their own contributions through their “Composers’ Collective.” Over the years the choir had a wonderful relationship with Howard Cable who became their “Composer and Conductor Laureate.” Howard had never heard of the choir when they first contacted him to ask him to conduct his two previous compositions for clarinet choir. He was so impressed that he wrote a brand new three-movement work, the Wychwood Suite, for the choir with Michele Jacot as soloist. Howard continued to work with the choir and arrange other works for them until he passed. The choir now presents three main concerts per season with a solid and growing audience base. Special kudos should go out to Roy Greaves, one of the founding members and arranger extraordinaire. On checking their last program, of the 11 selections performed six were arranged by Roy.

Waterloo: Another anniversary of a very different sort takes place when the Waterloo Concert Band performs on May 5 at Knox Presbyterian Church in uptown Waterloo. Rather than an anniversary of the band’s founding, this will celebrate the upcoming centenary of the arrival in Waterloo of Charles Frederick “Professor” Thiele. So far I have not been able to find much information about Thiele before his arrival in Waterloo. I do remember well the name though: from my days playing in a boys’ band eons ago. At that time boys’ bands and adult bands regularly went to tattoos and many other events where they were adjudicated by “Professor” Thiele. I hope to learn more about this man soon.

A newly discovered manuscript of a previously unknown composition by “The Professor” couldn’t have come along at a more opportune time for the Waterloo Concert Band. The discovery of an undated work called Festival Overture gave a natural impetus for programming this into the concert celebrating the anniversary of Thiele’s arrival in Waterloo. The band’s director, Trevor Wagler, now has the task of transforming the fragile paper artifact into individual parts, adapted to the keys and clefs that today’s musicians use. 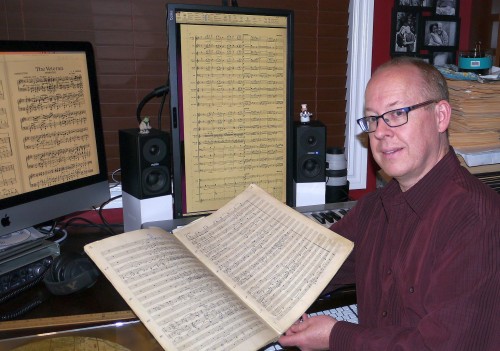 An accomplished digital transcriber, as well as a busy freelance French horn player and co-owner of Waterloo’s Renaissance School of the Arts, Wagler estimates that it will take about 20 hours to complete the task. The photograph shows Wagler at an oversized vertical computer screen in his office as he gently converts the yellowed sheets, each covered with dense but precise handwritten notes, into the individual parts.

As Wagler explains: “We’ve been including a lot of Thiele’s music in our repertoire during the past few seasons because more and more is coming to light, and so much of it is of very good quality. We couldn’t let this year go by without doing something special to celebrate the huge presence he had.”

Richmond Hill: In the good news department, we have just heard from a band that we hadn’t heard from directly before. Connie Learn, president of the Newmarket Citizens Band, put us in touch with Joan Sax of the Richmond Hill Concert Band (RHCB). Joan told us about RHCB’s new York Region Band Concert Series taking place this summer. This series has been tentatively called “Sundays at the Amphitheatre,” until the band finds a naming sponsor for it. The series is aimed at an audience of families, and will be held at the amphitheatre in Richmond Green Park, at Elgin Mills Road and Leslie Street in Richmond Hill.

The Richmond Hill Concert Band, formed in 2010, is a charitable organization that provides musical service and cultural support to their community, and education for band members. They perform annually at Richmond Hill’s Canada Day celebration, and in the Richmond Hill Summer Park Series. In addition to their public concerts, the band also performs concerts at seniors residences and hospitals.

Uxbridge: It’s much too early to talk much about that remarkable summer band, the Uxbridge Community Concert Band (UCCB), but this year is different. Founder and leader Steffan Brunette appears to be on the road to recovery from a serious medical situation, and is already talking about rehearsals. As one member of the band’s executive put it: “He is planning to be well enough to run the band this summer, but may have some stand-ins for conductors in the beginning as he might not be strong enough to listen to us play wrong

notes for two full hours!” Their theme for the 27th season is: “Inspired by Bach,” and they have a new website: uxbridgeccb.webs.com.

Aside from my remarks earlier about Jim Galloway’s Wee Big Band, we have some other news from the big band scene. We have just been informed by Lawrence Moule, of the After Hours Big Band, about a unique concert to take place Saturday evening, April 13, at the Aurora Cultural Centre. Music students from Sir William Mulock Secondary School in Newmarket will be presenting their first-ever public concert, a jazz program in collaboration with the After Hours Big Band. As Lawrence states: “The idea here is that an established band is helping to encourage youthful players, and possibly pointing the way toward future opportunities.” Aurora’s Town Council is studying plans to redevelop a portion of the town’s core into an entertainment and cultural complex, with the working title of “Library Square.” Plans include a new professional concert venue with 250 seats.

Meanwhile, existing concerts are held at the Cultural Centre (the former Church Street School, where Lester B. Pearson taught). It’s a professional venue but its concert hall, called Brevik Hall, is quite small. The organizers hope that this could be a model for future events at Library Square, once that development affords an expanded showcase for arts and culture in Aurora. Talented young local performers will be able to join forces with veterans to produce musical entertainment that will be unique to Aurora.

The After Hours Big Band got its start when some members of the Newmarket Citizens Band wanted to get together to play “big band music.” Those people stayed behind after the regular concert band rehearsal. Now, years later, this group, still mostly members of the concert band, have rehearsals on a different night at a different location.

I recently had unusual unplanned visit with another big band. I had been invited to visit a rehearsal of the York Region Brass Band. When I arrived at the venue, I was stunned to see a couple of saxophones. As it turned out I had been given the wrong date. I was just in time for a regular rehearsal of the Borealis Band of Aurora. Since I knew a few of the members of the band, I stayed until after intermission, and enjoyed a bit more big band music.

Shortly after last month’s column about Murray Ginsberg, I received a lovely message from Barby Ginsberg, Murray’s youngest daughter. Along with her thanks about comments in that column, she was very curious about where I had obtained some of my information. In particular, she said that someone would have had to be at his funeral to have known, as I wrote, that “someone said after his passing: ‘Look out heaven - you just got one more Saint who’s marching in.’.... That someone was me! That was how I ended my eulogy!” (Unfortunately, at this juncture, I can’t recall my exact sources.)

MAY 5, 3PM: The Weston Silver Band will have their “Afternoon at the Proms” with. Canadian and British repertoire. Glenn Gould Studio, 250 Front St. W.