In last month’s column I made reference to the upcoming Rebel Heartland celebration at Fairy Lake Park in Newmarket. Ergo: now we can report on what took place. As a starter, the weather could not have been better with a moderate temperature and a bright blue sky. Fairy Lake Park’s three gazebos (one large with two smaller ones immediately adjacent) provided an ideal location for musical performances. On the large gazebo we had the current Newmarket Citizens Band, somewhat scaled down to fit within their venue. On the smaller gazebos, three different ensembles made up of members of the main band performed. One was a brass ensemble roughly representative of the early 1800s. The other two were a flute ensemble and a clarinet group, including alto and bass clarinets.

Unless the organizers had been prepared to spend enormous amounts of money to ensure absolute accuracy and authenticity of all costumes and displays, this event inevitably was going to have some items that could not qualify as characteristic of the period. There were interesting anomalies, some more apparent than others. First was the makeup of the band: well-dressed in a wide range of period costumes, almost half of the band members were women, something town bands in the 1830s would not have permitted. In general, women were not allowed to play in such bands until the mid-1940s. I remember well when the first girl was permitted to play in the University of Toronto Band in 1947. It was some years after that when the first female player appeared in a military reserve band in this country.

Other anomalies: some distance from the band there was an encampment of tents with all the occupants in period costumes. Immediately adjacent were all of their late model automobiles, with nary an 1837 model in sight! Also, whereas at such a concert in the park any time in the 1800s people would be sitting close enough to the band to hear well, that was not necessary here. A powerful sound system with speakers located throughout the park made it possible for the audience members to select a listening location of their choice.

Perhaps the most interesting anomaly for me was a gentleman dressed from head to toe in the greatest of sartorial splendour including an elegant top hat, an elegant impression that was a bit shattered when I noticed that he was speaking to someone on a 2018-model cell phone and had a modern plastic water bottle close at hand.

Anomalies or not, it was an excellent day to be reminded of some very important times in our history. 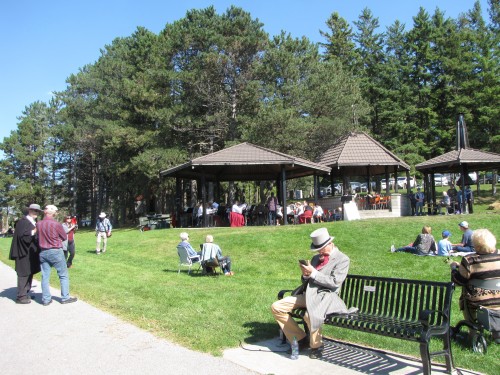 In recent months I have been hearing of a number of varied programs to provide musical instruments for children in various parts of the world, including Canada. In a number of cases I am still waiting for responses to my requests for information, but here’s an interesting one.

Local bass clarinet and saxophone player Michael Holdsworth grew up in suburban London (England) in the austere 1950s, attending a secondary school with an extremely limited music program and a budget to match, and no band. In his words, when the music teacher proposed starting a small brass group, there was only enough money for one trumpet and one trombone.  As luck would have it, there was another high school nearby, which was not under the same monetary restraints, that was replacing all their old pre-war instruments, and were happy to give them to Mike’s school.

Their senior shop teacher took on the repair challenge and soon the euphonium, baritone and tuba were ready to play. Mike took the baritone. “It was the start of a lifetime of musical adventures,” he says. “The door had been opened, and I learned firsthand that those with the tenacity and desire to help others and share their love of music can indeed make a difference.”

After a move to Canada, and a 20-year hiatus from music, his musical interest was rekindled and he now plays in several musical organizations in the GTA, from concert bands to symphony orchestras and musical theatre. In his words: “Making music has been the most rewarding pastime I have had in my life, and all this started with a secondhand old B-flat baritone horn.”

Over the past few years, Mike has been able to spend a few weeks each winter in his favourite Mexican destination, Puerto Vallarta. A few years ago, he decided to take his clarinet with him. Somewhere, he reasoned, there would be a group of musicians who would welcome a stranger into their midst. In the centre of Puerto Vallarta is a small square with the rather grand name Plaza de Armas (Parade Ground). In the centre of that square there is a bandstand where the Municipal Band of Puerto Vallarta entertains the public two nights a week.

One evening, while listening to a concert, Mike noticed that there was a man in the band who looked like he was a bit of an outsider, not the least because he was not dressed in the all-white uniform everyone else was wearing. When Mike spoke with him, he discovered that this man, Bob, was from Ontario! Bob introduced Mike to the band leader Raul, and, just like that, Mike was invited to play with them. He soon discovered what an incredibly talented group they were; all are professional musicians and music school graduates. From them he also learned of the importance of music to the community. “The City of Puerto Vallarta, and, as far as I can gather, Mexico generally, is committed to encouraging all young people to take part and to put public money into these efforts.”

Next thing that caught Mike’s eye was a March 8, 2018 article by writer John Warren in the Vallarta Tribune, an English-language newspaper, about an upcoming performance of the Puerto Vallarta Orchestra School (OEPV), in which Warren wrote “Now in its fifth year, the OEPV has transformed the lives of many children in Puerto Vallarta. The aim of the cultural project is to reduce social problems, crime and addiction by providing free musical education and social development to children who would otherwise be unable to afford it.” The results have been impressive. “The International Friendship Club (IFC) has supported the OEPV since 2014 as part of the club’s emphasis on helping Mexican children reach their potential. Altogether, the OEPV is teaching almost 300 children the joy, teamwork, discipline, concentration and co-operation that come from learning music and, at the same time becoming good citizens.”

One of the major challenges facing the Puerto Vallarta Orchestral School is obtaining musical instruments, and this is where things came full circle for Mike. “The cost of labour in Mexico makes repairing things far more viable than in, say, Toronto” he says. “Many instruments that we might discard because of the cost of repair here in Canada can be repaired and reused in places like Mexico.”

Mike’s primary focus so far has been aimed at the more affluent schools in the Greater Toronto Area, and thanks to a generous donation of instruments by Upper Canada College, the process has begun. “Anyone with old instruments in the attic or garage that they know will never realize any real cash might wish to consider donating them to the children and young members of OEPV.”

To this point Mike has received instrument donations including nine clarinets, six flutes, two bassoons, one alto sax, one tenor sax and one French horn (from Upper Canada College). An additional two flutes were received from individuals not associated with the school. Beyond donations of instruments, though, shipping costs are also a significant challenge. The total cost of shipping this first batch was $900 which was donated by a friend who also spends time in Puerto Vallarta in the winter. The initial shipment went directly using UPS and was $600. It arrived in three days. The other two shipments went using Chitchats Shipping and in total cost $300. It took four weeks but arrived intact.

For Mike it’s simple. “You can help improve a life through music!” he says. If you have any questions, comments, or, in particular, appropriate contacts in GTA schools, you may contact Mike at instrumentsforoepv6@gmail.com. For information regarding the OEPV, check their Facebook page – facebook.com/oepuertovallarta/ or website – oepv.org/web.

As mentioned earlier, I am still waiting for responses to my requests for information from a number organizations with similar projects. I know someone who is working on a similar project for South Africa, and have heard of another person collecting old instruments for children in Cuba. Stay tuned.

November 21, 7:30pm. Henry Meredith of The Plumbing Factory Brass Band, sent the following: “In their 23 years of entertaining Southern Ontario audiences, the Plumbing Factory Brass Band has been noted for performing eclectic repertoire that exemplifies all kinds of brass music, ranging from A to Z,” he writes. “However, this concert will focus on a single letter of the alphabet – the letter B! That is ‘B is for BRASS.’” As an example of their diversity the band’s Basses, also known as the Tuba Mirum Trio, will be featured playing Leroy Anderson’s Bugler’s Holiday. I certainly don’t want to miss hearing three tubas perform that trumpet number. ... BEautiful, BEguiling and BEdazzling Music to BE presented by London’s Plumbing Factory Brass Band at Byron United Church , 420 Boler Road (@ Baseline), London.

NOV 24, 7:30PM: Silverthorn Symphonic Winds open their season with “Out of This World.” Their musical journey will include Astronaut’s Playlist, Superman and Moonscape. This takes place at Wilmar Heights Event Centre – Concert Hall, 963 Pharmacy Ave, Toronto.

NOV 30, 7:30PM: The Newmarket Citizens’ Band will combine with the York Harmony Chorus for the finale of their “Comfort and Joy” concert.” The theme for the evening will be “Christmas on Broadway.” Old Town Hall, Newmarket.