As I sit down to put pen to paper (or fingers to keyboard) the darkness outside does not mean that it is bedtime. In fact, it is only just after dinner. The reality is that the autumnal equinox is upon us. It is time to reflect on the musical happenings of the past few months and peer into our crystal ball for details of what’s ahead in our musical world. As for the past few months, with few exceptions, no outstanding musical activity took place which was not mentioned in our September column.

Rebel Heartland: one exception will have passed into history by the time this issue of The WholeNote is available for reading but is worth revisiting. It was the participation by the Newmarket Citizens Band in Rebel Heartland, a 2018 re-enactment of the 1837 Upper Canada Rebellion, in which the Town of Newmarket played a vital role. The re-enactment, like the writing of this column, just happens to have been programmed for this equinox! 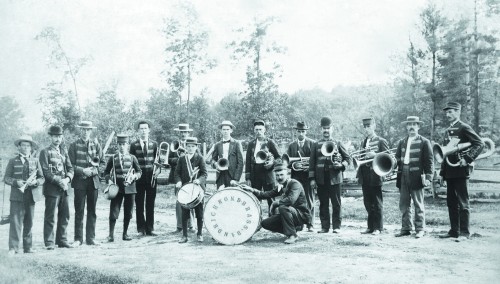 Baseball and Brass: Another noteworthy event which will be over before the end of September was a concert of period brass music on authentic instruments by the Cottonwood Brass, relating to an exhibition called “Baseball and Brass Bands,” which will run all the way to the December 22 solstice! Not surprisingly, Henry Meredith of Plumbing Factory Brass Band fame had a hand in things! Working over the summer with Michael Baker, the curator of the Elgin County Heritage Centre, they have mounted an exhibition featuring lots of period brass instruments, photographs of area brass bands, plus other materials from Meredith’s collection and from the Elgin County archives. Included is a PowerPoint presentation about Meredith’s involvement in providing the instruments for Disney’s movie remake of The Music Man, along with a filmed lecture demonstration about all kinds of musical instruments, particularly lip-vibrated aerophones.

Swing Patrol: One very special recent event for me was a small birthday party for Bunny Graf: not a band event, but with very important band connections. During World War II one of the army entertainment groups in Europe was called Swing Patrol. One of its key members was musician and arranger Eddie Graf; one of the dancers was a young lady named Bernice O’Donnell, known by her friends in the show as “Bunny.” At some stage in their travels through Belgium and Holland, Eddie and Bunny discovered each other, and they were married on New Year’s Day 1946. When released from the army they settled in Toronto where Eddie continued his musical career as an arranger and big band leader. His musical talents came to the fore with such programs as The Juliette Show. Bunny became a dedicated stay-at-home. This party was hosted by son Lenny Graf who has followed in Eddie’s footsteps as a band leader, soloist and children’s entertainer.

The Canadian Band Association (CBA)-Ontario have just announced this fall’s Community Band Weekend. It is being hosted by the Nickel City Wind Ensemble in Sudbury over the weekend of October 13 and 14. These Community Band Weekends offer attendees an opportunity to meet musicians from many bands and to experience a fun-filled and challenging weekend practising music all day Saturday. Some of the music will be familiar, and some not. Then on Sunday afternoon, all attendees will perform in a massed band concert. For information go to: cba-ontario.ca/cbw

Barrie Concert Band: Looking into the future, there are a few more bands which have plans for anniversary events of various forms. One of these is the Barrie Concert Band, under the direction of Peter Voisey. They have announced their plans to celebrate the band’s sesquicentennial in 2019. Founded in 1869, the 55-member band claims that theirs is the longest running musical organization north of the Golden Horseshoe. Beginning with its 16th annual “Veterans’ Salute” on October 16, the band will present various concerts throughout the coming year, in Barrie and across Simcoe County. Their 2018/2019 subscription series will begin with “A Christmas Fantasy” on December 8, and will continue with their “Last Night at the Proms” on March 2. Winding things up, in collaboration with the King Edward Choir they will present “150 years – Let’s Celebrate!” Saturday, June 1. In this final offering of the series, a number of previous conductors will share the baton with Mr. Voisey, directing the band in numbers which had personal significance to them at the time they were at the helm. In that performance internationally acclaimed tuba player, Mark Tetrault, will make a guest appearance and Rick Pauzé, the band’s immediately previous conductor, will conduct a work of his own, commissioned by the band for this anniversary year.

Icing on the cake, the band will also host a special 2019 spring CBA Community Band Weekend June 14 to16. The band conferred with the CBA for permission to hold it in June 2019, as part of their 150th celebrations. They are hoping to hold the Sunday afternoon concert portion of the CBA weekend outdoors, and reasoned that October would be too cold to do so. So the Sunday afternoon concert will take place at Meridian Place, Barrie’s newly designed and refurbished public space in the heart of downtown Barrie on the waterfront. For more information go to the band’s website: barrieconcertband.org

Waterloo Concert Band: Another significant anniversary event now in the planning stage for 2019 is one by the Waterloo Concert Band. The year 2019 will be the centenary of “Professor” C.F. Thiele’s arrival in Waterloo and his legendary three decades of leadership of the Waterloo Concert Band (formerly Waterloo Musical Society). My personal recollections of Professor Thiele go back to the days when I played in a couple of boys bands in Windsor. During the summer months we were off to play in a small town tattoo or similar event almost every weekend. Many of those included some form of competition where we played before one or more adjudicators. Of those, Professor Thiele was the adjudicator whom we feared most.

So far, what we know is that The Waterloo Concert Band has plans underway for a major historically focused public concert on May 5, 2019. Included in those plans will be at least one new musical commission. There will also be a number of, as yet undefined, other retro events around this occasion. As Pauline Finch, our contact with the band, says: “We’re aware of growing interest in band history in Ontario and especially in pivotal figures like C.F. Thiele, who built the foundations of band culture across Canada.” Hopefully we will have much more detailed information on these anniversary events as we get closer. In particular, we hope to have much more information on Professor Thiele’s legacy in Canada’s community band world. When he arrived in Waterloo a hundred years ago the Waterloo Musical Society was already well established, having been performing since 1858. So, this celebration is not a band anniversary, but a Professor Thiele celebration. In the mean while we will be paying some visits to the band’s website:
waterlooband.com.

I am very saddened to report on the passing of euphonium player Colin Jones. Although I originally met Colin through our joint association with the Royal Naval Association, over the years I learned much more about him through the band world. Colin joined the Royal Navy in Portsmouth in 1950. Although most bands for British naval establishments and ships were Royal Marine Bands, there were a few Navy Bands. Colin served in one such band, The Bluejacket Band, in Portsmouth as well as aboard the aircraft carrier HMS Indefatigable and the battleship HMS Vanguard. He left the Navy in 1955 and arrived in Canada in 1958. He played for a brief stint in the Cobourg Kiltie Band. In 1970 he joined the Concert Band of Cobourg and was a stalwart member until the time of his passing. To quote words from his obituary: “As a fantastic euphonium player his contributions were enormous musically.” He also gave freely of his time to make sure that the band hall was always in tip-top shape physically. He will be missed.