As I sit down to put pen to paper (sit down to the keyboard; this is 2017!), and muse on where to start for this September issue, after our two-month hiatus, one question seems to be: What was significant in the summer in the band world? The answer which keeps coming up is just another question: What day was summer on this year? What with cancelled concerts and rained-out festivals I’m going to have to dig back all the way to June for some of my highlights.

Three of the Best

In the June column I mentioned that I was looking forward to attending the final concert of the season of the Wychwood Clarinet Choir. I certainly was not disappointed. In particular, the arrangement of Calixa Lavallée’s Bridal Rose Overture by Richard Moore and Roy Greaves surpassed my expectations. In a previous column I had also mentioned that I hoped to meet Wynne Krangle, the clarinet player from Whitehorse who rehearses with the choir over the internet. There she was in the choir, and we managed to have a brief chat after the concert.

Another concert I mentioned in the June issue as one I hoped to attend was that of the Strings Attached Orchestra. Here again the concert exceeded my expectations. The orchestra has developed their Young Composers Initiative (YCI) where they “hope to encourage the writing of contemporary works for strings by composers 16 years of age and younger.” In this concert they performed Viaggio delle Farfalle by Damiano Perrella, a 16-year-old Grade 11 student from Port Credit Secondary School. In simple terms, one might say that it describes the evolution of a caterpillar to a butterfly. The title, translated from the Italian, means “the voyage of flight of the butterflies.” The composer states that he was inspired to write this during a stroll where he came across a butterfly flying away, and was immediately curious as to how he could translate this grace into music. In his words: “I wanted to convey the emotions related with flight starting from a caterpillar.” As Franz Liszt once said: “The musician who is inspired by nature exhales in tones nature’s most tender secrets without copying it. He thinks, he feels, he speaks through nature.” This young composer did just that. 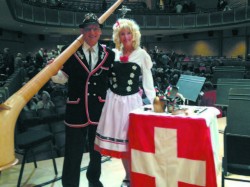 The third musical event of the summer which stands out in my memory was by the Resa’s Pieces Concert Band. Not only were they joined for some numbers by Resa’s choir and strings, but they had a featured alphorn solo by none other than Dan Kapp of New Horizons fame. This was Dan’s arrangement for band of Ballad for Alphorn and Frustrated Percussionist by composer Dennis Armitage. He was aided by his wife Lisa who, as the frustrated percussionist, displayed her virtuosity on the triangle, cow bell, small and large cymbal, slide whistle, police whistle, bird call etc. Having never heard of this composer, I checked and learned that he was born in England, but lived most of his life in Switzerland. Hence the interest in the alphorn. We have learned that Dan and Lisa will be performing this work in Lindsay on October 28 with piano and organ accompaniment. Hopefully, we’ll have details of that event in time for the October issue.

For those concerts which were not cancelled because of weather conditions, the common theme was the Canada 150/sesquicentennial. For most that meant a major component of the programs had to be Canadian content. In most of the programs this Canadian content was largely by lesser-known contemporary Canadians. As a form of memorial, almost every concert that I was aware of featured something by Howard Cable. Unfortunately I saw little, if any, 19th-century or early 20th-century Canadian works. Although there are several fine concert band arrangements of his work, the only work by Calixa Lavallée in any concert program which came to my attention was O Canada (other than, as mentioned, Calixa Lavallée’s Bridal Rose Overture at Wychwood).

To lighten things up for the coming musical season it might be time for a bit of trivia. In the spring I had the pleasure of attending a fun-raising trivia night for the Amadeus Choir. Based on the popular Trivial Pursuit, attendees formed teams around tables and provided team answers to questions posed. Each team had to choose a team name. There were prizes for correct answers, but there was also a prize for the best team name. The name which struck the chord with me was “La Triviata.”

Anyone who plays a musical instrument knows only too well that one of the perils on the learning curve is learning the meaning of the multitude of stylistic markings which lie beneath the notes on any score telling us how that bit should be played. During a recent rehearsal, while sight reading a new work, I realized that I had never seen a warning of an impending awkward, difficult or tricky passage. Ergo, it is time to add to the lexicon. How about jp or justo pretendo as a recognized warning for such situations?

On a recent TV news broadcast there was a brief showing of US President Trump arriving at some ceremonial function. He was greeted by a military band in full dress regalia with ceremonial trumpeters at the fore. After suitable trumpet flourishes and fanfare, the president stepped down to the tune of the traditional Hail to the Chief. Having heard of a controversy about this particular music, I dug into some notes which I had made some years ago. The first question might be why this music, written by an Englishman? Based on a Scottish Gaelic melody, it was written around 1812 by James Sanderson who added words from Sir Walter Scott’s Lady of the Lake. It seems that Chester Arthur, US President in the late 1880s questioned why important ceremonial occasions would require music by anyone but an American composer. Based on this, a call went out for an American composition. While there may have been other submissions, John Philip Sousa submitted his new Presidential Polonaise. It never caught on, and Hail to the Chief is still the choice. But with his emphasis on buy American, will the current president reconsider? Several renditions of Presidential Polonaise are available on YouTube.

The Toronto New Horizons bands will be starting back soon with their annual Instrument Exploration Workshop to be held Friday, September 8 at 7:30pm at the Long and McQuade store on Bloor Street. As in the past, this will be an excellent opportunity for anyone, considering taking up music or getting back after an absence, to consider which instrument might appeal to them. Just a few years ago the first New Horizons band was formed in Toronto with modest hopes. This year there will be a second beginner band bringing the total number of NH bands in Toronto to ten. Classes begin September 11.

The Hannaford Youth Band is preparing for an interesting season including a concert with the West Humber Steel Band in their “Rising Stars Brass and Steel” concert in the new year. For anyone interested in joining this great band, auditions are Saturday, September 16. Applications may be submitted online.

The York Regional Brass are preparing for another season of brass band music. They are looking for new members and would welcome inquiries. They rehearse in Aurora on Wednesday evenings. If interested, contact Peter Hussey at pnhussey@rogers.com.