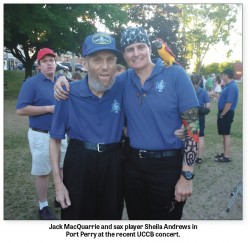 It’s time for the September column already. Normally, at this time of year, I would try to focus on coming events. However, if there are interesting events in the band world coming in September, nobody has told us about them! There are a few anniversaries to comment on, though, starting with my own!

With this issue I am starting my 11th season writing this Bandstand column. It seems like just a few weeks ago when I sat with David Perlman discussing that first column for September 2006. On looking over that first column one event stands out. It was the announcement that: “As part of the opening ceremonies for the new Rose Theatre Brampton, on Sunday September 10, 2006 at 8pm The City of Brampton Concert Band will present 'A Tribute to Howard Cable.' As Guest Conductor, Dr. Howard Cable OC will conduct a new work commissioned for the occasion.”

Nine years and 11 months later, the major event in our band world one month ago was a “Howard Cable Memorial Celebration.” Toronto’s St. James Cathedral was packed to hear tributes from family members and many who had worked with Cable over his long, illustrious career. Some came from as far away as Halifax to participate in the tribute. A 50-member Howard Cable Tribute Band, composed of professional and semi-professional musicians performed a number of Cable’s compositions for band. Many then gathered at the nearby Moss Park Armoury for a reception.

Newmarket’s Good News: It’s always a pleasure to report on good news, and that certainly came to the Newmarket Citizens Band recently. Eleven years ago their longtime home at the Lions Club was destroyed by fire. The work of arsonists destroyed the building. However, much of the band’s library, stored in steel filing cabinets, survived along with some instruments and archival material. After 11 years as nomads rehearsing in a number of school music rooms, various clubhouses and church facilities they now have a true home. In early August the band held its first rehearsal in their room in Newmarket’s Ray Twinney recreation complex. They now have an excellent large rehearsal space complete with private storage for music and instruments immediately adjacent. At the first rehearsal in their new home, band members surveyed a few items which survived the fire that are now looking for homes. A very smoky bass drum with the band’s still visible art work may very well have become a coffee table since time of writing this!

Two WU-linked anniversaries: On the anniversary front there are two quite different ones to report on. However, they both have at least some of their roots stemming from the Western University. The first of these groups is Brassroots, a ten-member brass ensemble from London, Ontario. They are celebrating their 30th anniversary with the release of a CD titled Passion for Brass which is reviewed elsewhere in this issue. All members, except one, are WU graduates and all except one are music educators.

The other anniversary is that of Steffan Brunette who is retiring after 25 years as conductor of the Uxbridge Community Concert Band (UCCB). In the first summer after his graduation from high school, he wanted to continue with a band but couldn’t find one near home so he started this band. As a music student at WU he revived the band each summer. When he graduated and became a high school music teacher in the area, he kept the band running each summer.

When the band was first formed it served as a means for members to continue playing during the summer when school bands do not operate. Now, with many members returning year after year, members are no longer primarily students on their summer break. Now, members range from teenagers to a good many retirees.

Each year, after their final concert, band members vote on one selection from the season’s repertoire to be included in the next year’s programming. That, in turn, leads to the choice of the next season’s theme. The number chosen from last year was the music from the Disney movie Pirates of the Caribbean. Hence, the theme for this season was to be music associated in one way or another with the sea. With a bit of a play on words the band then went “Sailing the High C’s” this summer. From Handel’s Water Music, Vaughan Williams’ Sea Songs, H.M.S. Pinafore and Pirates of Penzance to the Petty Harbour Bait Skiff, it was all about sailing musically. To bring the audiences into the present, the concerts featured a fine new work, By the River, composed by band member Kristie Hunter.

To celebrate their conductor’s 25 years of dedication, the band had a great BBQ and pool party after their concert in Palmer Park in Port Perry. Some band members even dressed as pirates with colourful artificial tattoos and even a parrot on the shoulder. Now that Brunette is retiring from the band at least for one season, members of the band are forming a “What do we do now?” committee.

New Horizons: Over the past six years there have been numerous mentions in this column of the growth of the New Horizons Band movement in our area. A few months ago we mentioned the airing on TVO of a documentary on the development and growth of the Toronto New Horizons Bands. Dan Kapp, director of the Toronto NH bands has just informed me that, as a direct result of that program, there are already 36 confirmed registrations for the next new band to start in September. There were also dozens of phone and email inquiries which will certainly lead to more new members joining. For anyone interested, the New Horizons Bands will have their annual “Instrument Exploration Workshop” at the Long & McQuade Bloor St. store Friday, September 9 at 7pm.

To the museum: On a number of occasions in the past I have also written about the great collection of vintage brass instruments amassed by Professor Henry Meredith at the Western University and the hope for the establishment of a proper museum to house and display this collection. On looking over my own collection of instruments which haven’t been played in years, I have decided that some of these deserve to be in that collection. As soon as we can arrange it, two trombones will be moving to their new home. The first is a Toronto-made Whaley Royce instrument dating back to the early 1900s. The other is my very first trombone. This Manhattan model by Selmer is the one which I played in a boys’ band all through university and six nights a week at a dance pavilion. There hasn’t been a sound from it in over 60 years. It deserves a decent retirement.

Community Bands: Periodically, in this column we ask that our community bands let us know what they are doing. In the past few months, since the last issue of The WholeNote, we have not heard a word from any band about their activities. Community bands should do more to promote themselves. Otherwise, how do we know what you are doing? Please keep us informed.

Anthem Butchery Cup: A few months ago we established the Anthem Butchery Cup (ABC) (a handsome Spode Thundermug)to award those people who choose to display their talents (or lack thereof) by modifying our national anthem to suit their particular level of musical talent. In the past it has always been a solo performer who has distorted the melody. A few weeks ago at the Major League Baseball All-Star Game a new benchmark was established. One member of a quartet of tenors, without telling the others, decided to substantially change the lyrics of Canada’s national anthem. Remigio Pereira stunned his three cohorts and his audience with his new words. The last we heard, the four Tenors had morphed into the three Tenors. Mr. Pereira succeeds Nellie Furtado as ABC title holder.

Roland Hill: We were sad to learn of the passing of Roland Hill just shy of his 74th birthday, on July 2, 2016. He had served for 32 years as music director of the Whitby Brass Band until 2012. He will be missed.