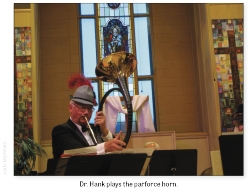 People’s given names saddle them with epithets that tend to remain with them throughout their lives. The name Jack, for example, endows or burdens me with more than my share. A few of the more obvious:  Jack be nimble, Jack Sprat could eat no fat, Jack was every inch a sailor, Jackass, and Jack of all trades, but master of none. The last of these, “Jack of all trades,” particularly rankles when I hear it applied to musicians willing (and able) to switch from their usual instrument to another to fill in for some other missing instrument in a band. (The disdainful critics are, generally, those who would not be able to do so.)

A more complimentary term than “Jack of all trades” might be “A man of many hats.” I can’t think of anyone in the music world more deserving of that title, sometimes quite literally, than Henry Meredith of Western University (Doctor Hank as he is affectionately known) who displays his amazing array of talents with the aid of his Plumbing Factory Brass Band (PFBB). I had the pleasure of attending their most recent concert in London where, demonstrating several of the many period instruments from his vast collection, he donned the style of hats that might have been worn by musicians of the period.

This concert was a perfect example of what I have often described, and encouraged, as “Music Education as Entertainment.” The title of the concert was “Meet the Plumbers,” but would have more accurately described the scope of the concert if the title had been expanded to include “and Meet Their Instruments.” After the opening number, performed by the entire band, the audience was introduced to all of the members of the family of modern brass instruments and many of their predecessors including parforce horns, valveless trumpets, saxhorns, and the ancient cornett. In many of these smaller ensemble numbers all the musicians wore hats of many eras from Doctor Hank’s colourful hat collection.

The concert’s grand finale began with the introduction of the vuvuzela which could be described as a type of primitive klaxon. Its modern offspring, the plastic vuvuzela, came into prominence (notoriety is perhaps a better word) a few years ago when thousands of them were sounded during football matches at the FIFA World Cup in South Africa. In 1930 composer Henry Fillmore wrote The Klaxon March where he introduced the sound of early car horns into the work. At this concert, a few members of the audience were given vuvuzelas to produce the appropriate sound and then cued by Meredith whenever the music called for the klaxon. I can proudly report that this Jack of all trades added to my repertoire by displaying my musical skills on a bright green plastic vuvuzela.

Doctor Hank is truly “a man of many hats,” and he displayed his many talents as conductor, instrumentalist, curator and entertainer, simultaneously educating and entertaining his audience. After enjoying works of four centuries spanning the era from Samuel Scheidt in the early 17th century to Henry Mancini and Paul McCartney, we all had learned as we listened. We went home with memories of a great concert and some newly gained knowledge of some of the many aspects of music. 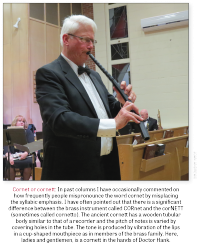 Wychwood Clarinet Choir: The next major event on our musical calendar was the “Sounds of Spring” concert of the Wychwood Clarinet Choir. This was a very special concert dedicated to the memory of Howard Cable, who had been their composer and conductor laureate in recent years until his passing in March. In addition to the performance of two of Cable’s works from the 1960s there was a special tribute section in the printed program with photographs with choir members in recent years. During the intermission Bobby Herriot, trumpeter, conductor, composer and long-time friend of Cable spoke about their friendship and working relationship over the years. Cable’s two daughters and one son were in attendance and, after the concert, spoke of a few initiatives under discussion to recognize their father in one of Toronto’s parks. (We were also treated to a fine arrangement of Tchaikovsky’s Andante Cantabile from the String Quartet Opus 11 by Cable’s friend, distinguished arranger and musical director Fen Watkin who was also in attendance.)

As for the repertoire, there were two standouts for me. The first of these was a novelty number, with a very catchy melody, named Immer Kleiner by 19th-century composer Adolf Schreiner and transcribed by George S. Howard. For those not proficient in German, the title means “Always Smaller” and that is exactly what happened to Michele Jacot’s clarinet. After a brief interlude, she stopped, removed the bell of her clarinet and then continued playing. After another melodic interlude, she stopped again and removed the lower joint which is the bottom half of the keys of the instrument.Then on with the next section of the music with only the upper joint keys, then without the barrel until she was left with only the mouthpiece. It was all very melodic, well performed and hilarious to witness.

The second standout was a transcription of Gustav Holst’s First Suite in E-Flat for band. Many years ago I read, in a scholarly publication, that this composition and Holst’s Second Suite in F had been written as commissions from the Royal Military School Music, Kneller Hall. It was reported that directors of the school lamented the fact that almost all serious concert works played by British military bands were transcriptions of orchestral music. In a recent check of possible sources, I have not been able to verify that. However, I was able to confirm that this suite was premiered at the Royal Military School Music in 1920. This acceptance that the military band was a serious form of ensemble prompted other composers, including Ralph Vaughan Williams and Gordon Jacob, to write serious band music.

A Special High School: It isn’t often that I report on high school band concerts, but I must make an exception this month. For a number of reasons the music department of Dr. Norman Bethune C. I. deserves special mention. Among many other selections in their “Spring Music Night” were a new composition and a fine transcription. In honour of the school’s founding principal, Robert Thomson, whose school nickname (presumably affectionately) is “Thor,” the school commissioned J. Scott Irvine to write a suitable composition. So it was that the school’s wind ensemble gave the world premiere performance of Irvine’s stirring Mjolnir, The Hammer of Thor. Another outstanding number by the Wind Ensemble was a transcription of Gustav Mahler’s Symphony No. 1 “The Titan.” This arrangement by the school’s director of music, Paul Sylvester, was part of his master’s thesis.

A New Band: For my third concert in four days I was thrust into a different role. I was not in the audience this time but playing in the first formal concert of the fledgling York Region Brass. Yes, we did have to have a couple of ringers to fill in, but all went well. One of these ringers brought a very special surprise for me. Jonas Feldman reminded me that I had been his teacher many years ago. As is customary, teachers and students usually lose contact after the students move on. However, every once in a while our paths have crossed, and in this instance we were sitting beside each other for the band’s end-of-concert photograph. In the interim since we first met, Jonas just happened to have earned bachelor and master’s degrees in music. Another surprise: although I had been rehearsing with the group for several weeks, I had no idea that there was a composer in our midst. Then we played the new Lavender March by euphonium player Eugene Belianski. If you play a brass instrument and live within driving distance of Newmarket, the York Region Brass would love to hear from you. Their email is pnhussey@rogers.com.

Elsewhere: As mentioned last month, the Uxbridge Community Concert Band has just started another season. They would love to hear from potential members. If you would like to try a new band for the summer months, contact the band at uccb@powergate.ca or visit their website at uccb2016.webs.com.

By the time that this issue is published the Toronto New Horizons Bands will have wound up their sixth season with a concert by 195-plus members in six bands plus a jazz orchestra. Rather than take time off, NHB Director Dan Kapp has announced that he will be offering what he calls “a jump-start camp” for people returning to playing after not having played for a while. There will be experienced staff for daily workshops, band classes, interest sessions and ensembles. This will all take place at the Miles Nadal Jewish Community Centre at Bloor and Spadina from July 18 to 22. Their website is mnjcc.org/camps. And a reminder: as mentioned in last month’s issue the documentary film about these New Horizons Toronto bands will be aired on TVO, June 8 at 9pm. After that it will be streamed on the TVO website.

Getting June off to a flying start, on Sunday, June 5 we have no fewer than four concerts by community instrumental groups, two of which will be performing with choral groups:

At 3pm the Newmarket Citizens’ Band will be performing in their “Spring Fling Concert” with the Upper Canada Chordsmen Chorus at Trinity United Church, Newmarket.

At 7pm the Strings Attached Orchestra, with music director Ricardo Giorgi will present their “2016 Friends & Family Year End Concert” at Tribute Communities Recital Hall, York University. This will be another concert with an interesting adaptation. The Vivaldi Concerto for Two Trumpets will be performed but with two violins playing the solo trumpet parts. As mentioned earlier, this seems to be the season for original compositions and this concert will be featuring two. The first, with the whimsical title, Overture for a Puppet Show, is by Ric Giorgi himself. The other, Cassiopeia by 16-year-old Adam Adle, is the winner of the orchestra’s Young Composers Initiative 2016.

At 8pm Resa’s String Ensemble will hold their spring concert at Crescent School.

Finally, on Tuesday June 7 at 8pm, Resa’s Pieces Concert Band will perform their spring concert at the Toronto Centre for the Arts.

Jack (of all trades) MacQuarrie plays several brass instruments and has performed in many community ensembles. He can be contacted at bandstand@thewholenote.com.