In last month’s issue I mentioned that, for the first time, Canadian Band Association, Ontario would be holding a Community Brass Band Weekend, February 19 to 21. Unlike previous Community Band Weekends this one was devoted to the music of the British brass band movement. For those not familiar with these weekends, this is not a gathering of bands. Rather it is a weekend of music-making by individuals who enjoy playing music of the type featured, in this case, the British Brass Band style. The host band for this weekend was the Oshawa Civic Band with conductor Rita Arendz.

Most participants were members of such CBA-member bands as the Weston Silver Band, the Metropolitan Silver Band, the Whitby Brass Band, the Oshawa Civic Band and others. There were also some participants without any particular brass band affiliation. As in other such weekends, participation was open to any brass and percussion players. The rehearsal and public concert provided an opportunity for brass musicians not familiar with the genre to experience the unique sound and some of the repertoire of the brass band movement. Since there appears to be a resurgence of interest in brass bands and their music, this might be a suitable time to probe into the world of the brass band music, its performers and its devotees.

The Characteristics: For starters, let’s look at the differences between the brass band and what is generally referred to as the modern day concert band. The principal difference is that a brass band has no woodwind instruments, i.e. no flutes, clarinets, saxophones, oboes or bassoons. As well, the brass band has no French horns. The early brass bands generally had only a single drummer. Nowadays, many have a larger percussion section including timpani and, in some cases, melodic percussion.

As for instrumentation, cornets are used rather than trumpets. Of those, the soprano cornet plays the sort of high register part which would be played by a flute in a concert band. The E-flat horns (sometimes called alto and sometimes called tenor) fill in between the cornets and the baritone horns and trombones. The bass section has both E-flat and B-flat instruments. Since all of these instruments except the trombones have a conical bore rather than cylindrical, the tone has a more mellow quality. The tone is even more mellow for the flugelhorn which has a much more conical bore.

So what is the difference between a brass band and a silver band? Silver instruments are brass instruments which have been silver plated. In the early days, silver instruments were considerably more expensive than the brass ones, and thus had some snob value for those bands which could afford them. Today the price difference is not significant.

Another major difference between brass bands and concert bands is the musical notation. With the exception of percussion, bass trombone and some tenor trombone music, all parts are transposed and written in the treble clef. This means that for every instrument, from the basses right up to the soprano cornet, the fingering is the same. So, for beginner classes, group instruction on all of the instruments is possible. My introduction to band music was in a boys’ brass band, and our instructional classes always had the range of instruments from cornets to basses in one class. With this system, if necessary, players are able to switch more easily between instruments. Thus it is easier to cover parts when a particular instrument is missing.

As I mentioned, my first band was a boys’ band. That was the norm then. Girls were usually not permitted in bands. In our band there was an exception. We actually had two girls. (Since their father happened to be the bandmaster, that might have made a difference.) It was as late as 1947 that the student council of the University of Toronto called a special debate to finally permit a girl to play in the university band. Fast forward to 2016 and this band weekend. Two of the most prominent brass bands in Southern Ontario have women as conductors. Rita Arendz leads the host Oshawa Civic Band and Fran Harvey has been leading the Metropolitan Silver Band since 2002.

Brass bands first appeared in Britain in the early part of the 19th century. With the Industrial Revolution and urbanization, employers were happy to finance ways to decrease political activity and minimize the amount of time the workers spent in the pubs. Along with that Industrial Revolution came a vast improvement in technology and mechanical skills. Fortuitously these factors coincided with the invention of valves for brass instruments. Now brass instruments, other than the trombone, could play chromatically.

Company Bands: Employers were now willing and able to provide a recreational outlet for their workers. In particular, mining companies and mills fostered company bands. It has been estimated that by 1860 there were over 750 brass bands in England. It would be difficult to determine which bands still performing have been the longest running. However, no one is likely to match the claim that the Black Dyke Mills Band, founded by that name in 1855, has one of the longest traditions. It has been reported that there are now thousands of brass bands in the UK.

Since playing a musical instrument was deemed to be an acceptable social activity, if for no other reason than it kept people from the pubs and other corrupt activities, abstinence groups began forming temperance bands. Then in 1878, albeit only as a quartet, the first Salvation Army band was formed. Since the Salvation Army frequently took their message to the streets, the portability and weather resistance of brass instruments had considerable appeal. If a brass instrument is rained on, simply dry it off. That won’t do for a clarinet or a violin. While some Salvationist bands did manage to keep their activities separate from the general brass band movement, there was some cross-pollination. Long before it became acceptable in the general band movement, the Salvation Army actively recruited women for their bands.

Contests: Over time, local contests involving a few neighbouring bands grew into larger events with more bands. Then, with the backing of Sir Arthur Sullivan, the first National Brass Band Championship took place at the Crystal Palace in 1900 with twenty-nine bands competing. The test piece was an arrangement of Sullivan’s compositions and Sullivan conducted the final massed band concert. Sullivan’s name certainly gave the event an element of respectability; calls for original music were soon answered by such composers as Sir Edward Elgar and Gustav Holst.

The NBBC remains the principal competition in the British brass band world. Generally speaking, the importance of contests has a been a major factor in the development of top-notch players throughout the entire brass band movement. Cornetist Herbert L. Clarke is one shining example of the talent spawned by such groups. Another that I had the pleasure of hearing at Massey Hall some years ago was French virtuoso Maurice André. He started in a company band in a coal mining town in France. 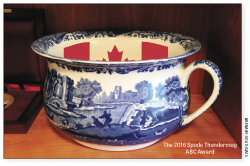 A New Award: Every once in a while I stray a bit from the band world to either praise or vilify some event in the musical world which I have either been thrilled or appalled by. This month it’s the latter. In recent years, when major sports events are being televised, it has become the norm to have some musical celebrity sing the national anthem rather than play it so that the audience can sing it in the way that was intended. Some of these soloists have the intelligence to lead the singing in that spirit. Some of them have decided that their personal styling is far more important than authenticity. For me, the anthem sank to the bottom of a new crevasse recently at the beginning of the National Basketball Association’s All-Star Game in Toronto. The “guest artist,” whose facial contortions matched those of her voice, inflicted considerable pain on all of her victims from coast to coast. O Canada will never be the same.

Be it hereby proclaimed that henceforth, every February, this column will award the ABC (the Anthem Butchery Cup) for egotistical desecration of the national anthem. Nelly Furtado wins the inaugural award hands down. Nominations for next year’s award are now being accepted. Send video links to support your case.