A couple of weeks ago, having been lulled into complacency by a few warm sunny days, I was under the impression that spring had arrived. A few days later that illusion was shattered by the sight and sound of hail clattering on my windshield. Last night, on my drive home from a performance, I found myself humming the strains of Spring will be a little late this year only to have that confirmed when I drove in to a snow-covered driveway. Fortunately, through all of this, the community musical groups have been heralding spring in a variety of ways. I had the pleasure of attending a few of these.

Recent events: One such concert was “A Salute to the British Isles” by the Clarington Concert Band under the direction of Barrie Hodgins with the Pipes and Drums of the Oshawa Legion. What a variety. From the humour of conductor emeritus Bobby Herriot and the elegant vocal stylings of Donna Lajeunesse and Father Paul Massel to the stirring renditions of traditional Scottish melodies by the pipes and drums it was an evening to be remembered, MC’d by Colin Rowe.

With the  concert being billed as “A Salute to the British Isles,” there were questions as to how the Radetzky March, a march composed for the Austrian army by Johann Strauss Sr., qualified as British music. After all, this march was dedicated to Field Marshal Joseph Radetzky von Radetz after his victory at the Battle of Custoza. It turns out that, over the 165 years since its first performance, this march has been adopted as their official march by several military units in various countries around the world from Chile to Sri Lanka. One of those military units just happens to be 1st The Queen’s Dragoon Guards in Britain. The Radetzky March is their official regimental march. Ergo: it’s British music.

Needless to say, there was the inevitable clapping and foot stomping by the audience. It turns out that this too has a long tradition. When it was first played in front of Austrian officers, they spontaneously clapped and stamped their feet. This tradition is kept alive today by audience members around the world from town band concerts to the New Year’s Concerts of the Vienna Philharmonic. 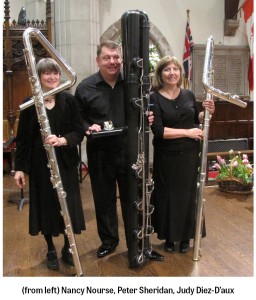 Flute Street: If one were to hear the term “flute street,” one might be inclined to consult the town street guide to find its location. A visit to Google could not find any street by that name in this area, but there is a fine flute ensemble in Toronto by that name. Initially formed by Nancy Nourse and Allan Pulker in 2013, as the resident ensemble for Canada’s First National Flute Convention, the group has established a special place in the musical life of Toronto. While music aficionados are familiar with the concert flute and its baby brother, the piccolo, Flute Street has been introducing audiences to several other members of the flute family. I had seen and heard alto flutes and bass flutes before, but Flute Street’s recent concert, “And the Giant Began to Dance,” introduced me to the six-foot-tall contrabass flute. I not only saw two of these, but was introduced first hand to an even bigger member of the family. Guest artist Peter Sheridan presented us with the subcontrabass flute, which was taller than anyone present, Sheridan included.

As for the concert, we were treated to a wide range of offerings from solos to works including the entire ensemble. My personal preferences were numbers featuring Sheridan on the bass flute and the contrabass flute. His warm tone and melodic phrasing on the bass flute displayed the potential of this instrument better than I had ever heard. While the subcontrabass flute did add an interesting bottom end to the ensemble, it didn’t appeal to me as a melodic solo instrument except for its novelty value. Sheridan informed us that he has just recently introduced the ultimate low-register flute. I believe that it is called the hyperbass flute with a lowest frequency of 16 Hz. He admits that this is below the audible range of his wife and many other people, but given the right circumstances it can be felt physically if not heard.

Newly unusual: Before leaving the topic of unusual musical instruments, I feel compelled to report on a recent radio program on the CBC. It was a presentation of newly crafted unusual musical instruments. The one that sticks in my mind was a large wind instrument which required two players. In the demonstration, the developer blew into the mouthpiece and operated a slide while his wife operated a set of valves. While the sound was of questionable quality, the name had a certain quirky appeal. It has been named the Humungaphonium. I have yet to see a photograph.

Tsar Trek: While miserable weather prevented me from attending their recent spring concert, the Plumbing Factory Brass Band warrants ongoing mention in this column for their imaginative programming. Following up on their previous concert, Henry Meredith crafted “Tsar Trek II – The Sequel” on their “Rousing Russian Repertoire Voyage.” Not only does this band perform to a high standard, they also set a standard which is hard to match in terms of programming of top quality music. I’m sorry that I couldn’t be there.

Uxbridge: Italian composer, Luigi Boccherini has been quoted as saying that “Without the performer the composer’s work is useless.” It would be hard to dispute that, but performers can be assisted considerably by their own careful preparation and that of the conductor. An excellent example of how a conductor may foster good preparation has recently come to my attention. The Uxbridge Community Concert Band is a summertime-only band with activities from early May until late August. Two months before rehearsals were scheduled to begin, conductor Steffan Brunette started with those preparations. Not only did he send a complete list of the proposed repertoire for the season to every returning band member, but he provided internet links to performances of every work. As long as members had internet access they could go to every number in the repertoire and listen to quality performances as often as they might wish.

Music Alive: I had heard of Music Alive before, but must confess I wasn’t quite sure just what it entailed. Suddenly, a few days ago, I received a phone call: The Newmarket Citizens Band was to play at Music Alive that night; was I available to sit in and fill a gap? A few hours later I was treated to an unexpected musical event. Music Alive is an annual festival open to all school and community ensembles and soloists operating within York Region, including public and private schools plus community bands, orchestras, choral ensembles and individual musicians. For 2015 it has an incredible assortment of musical groups and performances. With over 15,000 participants and sessions stretched over ten weeks, Music Alive is one of the largest student music festivals in the country.

This is an adjudicated, but non-competitive festival. The evening that I was there, I was with the only adult group. The main group performance was by the “Area West Elementary Enrichment Band” made up of 80-plus elementary school students. In addition, there were numerous solos and small group performances by students from Grades 5 to 8. One particular number stood out for me. Girls on two flutes and a clarinet performed amazingly well on a well-known Handel selection.

Adjudicator John Phillips, a professor from the University of Western Ontario, provided helpful inspiring comments to all participants. After we (the adult band) played our two numbers, Phillips pointed out to the young elementary school musicians how our performance was an example of one way that making music can develop into a stimulating lifelong activity.

On the horizon: On Sunday, May 24, at 3:30pm the Wychwood Clarinet Choir will present “Swing into Spring.” The feature of the afternoon will be the induction of Howard Cable as composer and conductor laureate of the choir. Cable, a member of the Order of Canada, is one of the most significant and internationally recognized Canadian arrangers and composers. With a musical career spanning more than 60 years, he has had his works performed worldwide. Cable has been composing and arranging for the Wychwood Clarinet Choir since 2012. The program will feature a selection of swing favourites arranged by Cable for the choir and young crooner Michael Vanhevel. Also on the program is an all-clarinet rendition of Rhapsody in Blue, the premiere of Three Excursions, an original composition by Roy Greaves, and Clarifunkation by Paul Saunders. Artistic director and clarinet soloist is Michele Jacot. This all takes place at the Church of St. Michael and All Angels, 611 St. Clair Ave, W.

On Saturday, May 30 at 7:30pm, Silverthorn Symphonic Winds will conclude their 2014/2015 concert season with “Year of the Dragon.” Highlights include James Hosay’s dynamic Mayan Sports Festival, Philip Sparke’s virtuosic Year of the Dragon and Adam Gorb’s Yiddish Dances, a contemporary classic based on the klezmer tradition. The concert takes place at Yorkminster Citadel, 1 Lord Seaton Road, Toronto.

Bands we haven’t heard from for some time:

Friday, May 1 at 7:30pm the Oxford Winds Community Concert Band will be “Celebrating Heroes” at Knox Presbyterian Church, Woodstock.

Wednesday, May 6 at 7:30pm the North Durham Concert Band is having a “Springtime Serenade” at the Port Perry United Church.

Friday, May 8 at 7pm the Canadian Band Association presents “Windblown Art: Young and Old Masters.” This is a combined event with the Encore Symphonic Concert Band and the National Youth Band of Canada joining forces at Encore Hall, Wilmar Heights Centre, Scarborough.

Sunday, May 31 at 4pm the Columbus Concert Band, with guest soprano Kira Braun, will present their First Annual Gala Concert, “The Best of the Columbus Concert Band,” consisting of classical, Broadway, Dixieland, marches and jazz at De LaSalle Oaklands College. One of their band members, Alex Dritsas, is a Canadian soldier who was severely injured recently in a hockey game in Toronto. Many of the 65-member band have been donating funds for his rehabilitation. This concert will be dedicated to him and band members hope that he may even be released from hospital in time to attend. This is the first time the not-for-profit band has had a fundraising event to support themselves as all previous concerts have been to raise funds for other charities in the city.

This month’s lesser-known musical term is pizzicato  (pronounced pissicato): Too much coffee – time to take an urgent mid-rehearsal break. We invite submissions from readers. Let’s hear your daffynitions.