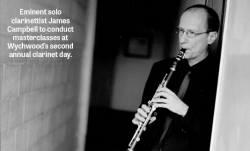 While the wintry blasts of January have not abated much, there are signs, on several fronts, that community band activity has not been dormant and that behind-the-scenes efforts of winter rehearsals are due to spring into a variety of programs well before Mother Nature takes her own leap into spring. However, before talking about what lies ahead, it’s worth visiting a couple of recent events that I had the pleasure of attending which created a lasting impression.

Strings Attached: The first of these was a concert by the new Strings Attached Orchestra which I mentioned in a recent column. Billed as a “Friends and Family Concert,” it was for the most part the sort of program one might expect with an all-string orchestra. However, it had one unusual feature. Senator Nancy Ruth had been invited to play percussion in the concert. Apparently, she had always wanted to play in an orchestra, and here was her opportunity. When invited to participate in the concert, she had thought that she might get to ring the telephone in Pennsylvania 6-5000 and maybe play tambourine in some selections. What a surprise when she became an honourary member of the percussion section of the orchestra and was coached on all of the timing and nuances of her small part. After the concert she stated “I had a blast” Unfortunately no photos were available of this performance. We’re wondering what interesting wrinkles co-founder Ric Giorgi can come up with for their final concert of the season in June!

Hats off to Bethune: The second event, something I rarely attend anymore, was a school concert. With our special invitation in hand we arrived at Doctor Norman Bethune Collegiate in Scarborough. For such events I had been accustomed to a token audience of parents. Not here. We had seats reserved for us or we would have had to stand. No fewer than seven groups performed. The concert began with two selections by the 110-member Junior Band and concluded with the Senior Band. Having attended school concerts in the past, I was accustomed to hearing selections such as Harold Walters’ Instant Concert to demonstrate the musical prowess of the students. Not this time. The final selections by the Senior Band were Howard Cable’s Snake Fence Country and the Festive Overture by Shostakovitch. The future of school music is certainly in good hands here. Bethune’s music head Paul Sylvester certainly deserves special mention for having a band play at that level.

Seventh Horizon: It’s that time of year for the local New Horizons group to form yet another new band. By the time this is printed the seventh Toronto New Horizons Band will have begun rehearsals shortly after their Friday evening Instrument Exploration event. A year ago at this time there was a film crew there recording the attendees trying various instruments and making their selections. The film has now been completed with the title The Beat Goes On. Originally planned for broadcast on TV Ontario, the release has been delayed while the producers investigate its eligibility in the Canadian International Documentary Festival, better known as Hot Docs.

Wychwood: The Wychwood Clarinet Choir have announced that they will be having their second annual Clarinet Day on Sunday March 1 in Walter Hall of the Edward Johnson Building. There will be masterclasses with James Campbell, morning workshops with U of T faculty and a concert with both the Wychwood Clarinet Choir and the U of T Clarinet Ensemble. For information about registration go to their website: wychwoodclarinetchoir.com. They have also reminded us about their spring concert ”Swing into Spring” on May 24. It’s a safe bet that they will be performing at least one work written for them by “composer-in-residence” Howard Cable.

West End News: Some months ago I mentioned that a new concert band had been established in Toronto’s west end. That was in the fall of 2014; now that new band will soon be performing their very first concert. The Toronto Concert Band, as it is called,  has put down roots in the Etobicoke-Lakeshore district. Most members are from Etobicoke, but there are many members from all parts of Toronto. Weekly rehearsals at Lambton-Kingsway Junior Middle School have attracted more than 60 members from amateur to professional status. The band’s tag line is “We Love to Play!” and that has translated into an enthusiasm such that their premiere concert will feature works ranging from Percy Grainger and Vaughan Williams to Frankie Valli and the Beatles. Under the direction of founding conductors Ken Hazlett and Les Dobbin, they have opted to stage their inaugural concert in the CBC’s Glenn Gould Studio. In their words, selection of this venue “aptly reinforces the Toronto Concert Band’s mandate of serving not only Etobicoke but the entire City of Toronto.” I certainly intend to be there on Saturday, January 31 at 7:30. I would recommend readers attend, but I have heard that tickets are all sold. Congratulations. For information on this band, go to their website  torontoconcertband.com.

Wellington Winds: Many months ago I wrote briefly about a DVD titled Appassionato: The Wellington Winds Story released by that band. As described by producer Michael Purves-Smith, it is a collection of “performances, interviews and sectionals illustrating the life of a concert band.” In a recent email message Purves-Smith reports that they have done a lot with their project but still have a way to go. He expects to be in touch again in a couple of months. At that time we hope to publish a special detailed report of the results of their work on this project.

Briefly from Silverthorn: Silverthorn Symphonic Winds have announced that their next concert will be on Saturday, February 28 and that, intriguingly, the repertoire for this concert has been selected by band members. Many times in this column I have mounted my high horse to campaign for more member participation in repertoire selection. This was welcome news, and I hope to get more details soon.

Many years ago, a longtime friend of mine, Bob Plunkett, upon retiring as a high school music teacher as well as director of the naval reserve band of HMCS York in Toronto, moved to Orillia where he established the Orillia Wind Ensemble. Over 17 years ago, on Bob’s retirement from that band and subsequent passing, the directorship of the Orillia band was assumed by Roy Menagh. Now, Menagh has indicated that 2015-16 will be his “victory lap.” Band members have indicated that they would like to have a new person on board by this coming fall/winter season in order to plan a smooth transition to 2016-17 season. They will, of course, be setting up a search campaign to seek potential candidates. If any of our readers have any suggestions, they could contact the band’s president, Hugh Coleman at
colemanz@sympatico.ca.