It’s transition time. Our one month break from publication is over, and it’s time both to reflect on the past few weeks and see what’s ahead for the month of September. It has been an interesting few weeks since I last put “pen to paper.” On the personal side there have been many performances, mostly outdoors, and a few cancellations. I have also had a few more visits to the Baycrest Centre where I am participating in their studies on the influences of musical activity on cognitive function. More about that in another issue. 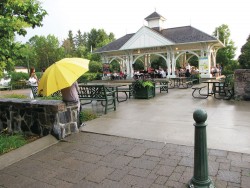 Concert band reflections: One of the most noteworthy developments on the community band scene has been the evolution of the Sunday evening concert series organized by the Markham Community Band and an organization called Unionville Presents. Initiated last year using the MCB’s inflatable bandshell in a parking lot in Markham, this year the series was expanded in scope and moved to the excellent Unionville Millenium Bandstand. With the exception of one concert, the rain held off; when I arrived to hear the North York Concert Band, the audience out front was limited to one solitary listener under a large yellow umbrella, but on stage there were two dozen or so listeners comfortably seated on each side of the band under the extended wings of the roof. As the concert progressed the rain departed, and by the end of the concert a good-sized audience was seated in front of the band. The crowd the following week was almost the same for the Richmond Hill Concert Band, with a dozen or so listeners also standing on a porch of a house across the road. For all the following weeks, with superb weather, the bands played to a full house of adults, children, dogs and even a trained cockatoo who added his gymnastics to the entertainment of those nearby.

Culture Days: Now for an update on Culture Days. This is a national event, now in its third year, which has obtained much less publicity than it deserves. Cultural Days is a coast-to-coast-to-coast federal government initiative to get artists and arts organizations out in the community and get the public aware of and involved with them. Thousands of activity organizers self-mobilize at the grassroots level to present and coordinate free public activities that take place throughout the country over the last weekend of September each year, this year September 28, 29 and 30. One Culture Days event of interest to community band members, that we are aware of, is an invitation to local brass players by members of the Hannaford Street Silver Band to sit in and join them for an afternoon of music making. Many members of the Hannaford audience are active brass players themselves, and so the Hannaford folks thought that it would be great to get together with them and make some music. The band will be in the sanctuary of the Metropolitan United Church in downtown Toronto on Sunday, September 30 from 2pm to 4pm to play music, enjoy some refreshments, and welcome any and all brass players of any age or ability level to play with them. (For those who might like a practising edge, check back at the Hannaford website www.hssb.ca for updates on this event. They expect to have parts available for download from their website. See also listings section D, “The ETCeteras,” for other Culture Days events.

Happy 140th anniversary to you! A few years ago we made some comments in this column referring to “Canada’s oldest community band.” That sparked quite a response from a number of bands, each of which claimed to be “Canada’s oldest band” or “Canada’s oldest continuously operating band.” Rather than re-ignite that discussion, it is more appropriate to offer congratulations to the Newmarket Citizens Band as they prepare to celebrate the 140th anniversary of the band being recognized as the “Official Town Band of Newmarket.” While a band had been playing in the community prior to then, it was in 1872 that the band was officially recognized as the town band. At that time a petition was circulated amongst the local business community by three sons of the fur trader William Roe. One of the sponsors was Robert Simpson of the Simpson department store chain. The grand sum of $319 was raised to purchase instruments.

To celebrate their 140 years of continuous service in the community, the Newmarket Citizens Band are inviting everyone to a special free concert complete with balloons and birthday cake. They will present a musical journey through time at the Riverwalk Commons, 200 Doug Duncan Dr., in Newmarket, on September 30. Festivities will get underway at 2pm. Bravo to one of the few bands that still participate in parades including, a half dozen or so Santa Claus parades every year.

Something for next month: With the approach of fall, many bands indulge in a bit of retrospection and then plan for concerts, other functions and repertoire for the coming season. An excellent stimulus for that is to meet with members of other bands at the CBA Community Band Weekend. Every October the Canadian Band Association (Ontario) conducts such an event. This is an opportunity for community musicians to meet like-minded individuals, play a broad selection of music under the direction of leading Ontario conductors and perform in a joint concert on the Sunday afternoon with the host band and a composite band. This year’s weekend, hosted by the Silverthorn Symphonic Winds, will take place on October 13 and 14, in Richmond Hill. Check for further details next month.

Endings:Unfortunately, we must report on the passing of two long-time band community members.

John Evans was the drummer for the GTA Swing Band up until last year. Brother John, as he was referred to, also played with the Swansea Community Concert Band led by his brother Frank Evans. John was 90. There will be a memorial service held in the fall.

As an undergraduate at University of Toronto, Ed Nixon was a regular on tuba in the Varsity Band. Years later, when the U of T Alumni Band was formed, Ed was a charter member. I have fond recollections of an incident with Ed while we were both in the Varsity Band. It was back in the days when university football fans travelled to out of town games by chartered train. After a night of celebrating a victory over the Queen’s University team, Ed and I missed our train back to Toronto. The solution was simple: let’s hitchhike home. Wearing our blue and white uniforms and carrying our instruments, we headed out to the highway and raised our thumbs. However, there was one problem: Ed was carrying a sousaphone. We did get a ride in the open rumble seat of an old car. Two carefree happy students, one trombone and one sousaphone made it back from Kingston with just a bit of gawking by passing motorists. Wish I had a photo. Ed was 84.

This month’s lesser known musical term is Vesuvioso: an indication to build up to a fiery conclusion. We invite submissions from readers. Let’s hear your daffynitions. 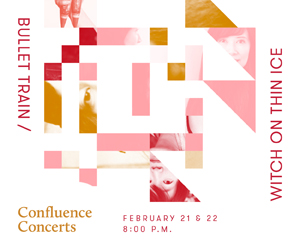