For many bands, this part of spring is the time for almost being able to shift gears. The fall and winter concert schedule is almost over, but not quite. As I write this, many have at least one more concert to perform. And although summer events are on the horizon, the music for them is not quite yet in the rehearsal folders.

Of the spring events I’ve already attended, two stand out, both for their musical excellence and their emphasis on young performers.

The first was a mid-week musical evening presented by the Naval Reserve Band of HMCS York at the Naval Club of Toronto. The Naval Club is small, with no stage or other performance platform. In other words, no place for a full size concert band. The solution: small ensembles and soloists took turns. For those audience members less familiar with the tonal quality and capabilities of the various instruments it was educational as well as entertaining. The trombone quartet, in particular, evoked comments such as “so that’s how trombones can sound.” Those who had prepared themselves for an evening of reasonably qualified amateur music were in for a surprise. As an example, the aforementioned trombone quartet consisted of one undergrad, one bachelor’s degree in music, one master’s degree in music and one Ph.D. in music. The entire program was organized by one of the young reserve band members, with their music director, Lieutenant Jack t’Mannetje, standing proudly in the background. On another matter, if my memory serves me correctly, this band of HMCS York broke ground when they first enrolled a female member circa 1967. The present balance? It’s 60% female. 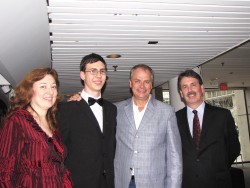 The second recent concert with young performers as a highlight was the final concert of the Hannaford Street Silver Band’s annual Festival of Brass where the winner of the Hannaford Youth Rising Stars Solo Competition wins the honour of performing with the professional band in the final Sunday concert.

Jacob Plachta, a second year performance major in the University of Toronto’s Faculty of Music won the award for the second year in a row, this time performing his own composition, Sonata for Trombone and Brass. In the preliminary rounds of this competition, the young musicians play with piano accompaniment. On the Friday evening the three finalists then perform with full band accompaniment. Plachta composed both a challenging piano accompaniment for the first round and a complete brass band score for the finals.

Guest conductor for the final Hannaford Sunday afternoon concert, featuring trumpet showman Jens Lindemann, was tuba virtuoso and educator Patrick Sheridan who, as an added feature of this year’s festival, also gave a workshop on the Breathing Gym. This is a daily workout routine “for Band, Chorus and Orchestral Winds” developed by Sheridan and fellow tubist Sam Pilafian. I had the pleasure of attending this event, and obtained copies of the book and DVD. Once I have mustered up the will power to commit to a daily regimen with this program, I hope to report on my improvements in tone, phrasing, articulation and dynamics. I don’t expect to be transformed into a virtuoso, but hopefully I’ll rise above the “virtual oh so” level.

The term “mixed media” seems to be a trend as bands explore ways to attract and retain audiences, with the traditional fare of concert overtures, marches and show tunes giving way to a broad spectrum of sight and sound phenomena accompanying the music. One such group is the Milton Concert Band.

Musical director, Joseph Resendes, first came up with the idea of a “space themed” concert late last season: their December concert included a contemporary piece by Eric Whitacre called Cloudburst, a fun treatment on Frosty the Snowman and a Christmas medley featuring the use of “boomwhackers.” In Cloudburst, Whitacre uses finger snapping as a musical device to simulate rain, with the audience encouraged to participate, while the piece is performed against the image of a video clip that simulated rain. Taken together, the music, the video and the audience participation created magic. In Boomwhackers, a very traditional and simple arrangement of classic Christmas carols was “animated” by the use of non-traditional instruments and the reactions of volunteers. A group of local councillors, sponsors and several volunteers agreed to wear hard hats and sit on chairs facing the audience. Several band members stood behind them with their long plastic tubes (the boomwhackers). Essentially, the hard hats became a giant xylophone, with the boomwhackers as mallets. The audience was able to watch the expressions on the faces of the hard hat volunteers as they anticipated from the melody when it was their turn to be whacked!

Encouraged by audience response, Resendes planned an even more ambitious space-themed spring concert. Rather than a traditional emcee, recorded narration played as a voice-over between pieces to simulate being in a planetarium rather than a concert venue. This was supplemented by special lighting and a variety of video loops and other NASA images. Holst’s Jupiter, Mangione’s Land of Make Believe, and of course, the Star Wars and Star Trek themes were the backbone of the musical program.

Ironically, I missed this Milton Band concert, because I had prior plans to attend a very different space-themed concert. This was the “Music of the Spheres: A Fusion of Music, Art and Science,” celebrating astronaut Dr. Roberta Bondar’s 20th anniversary of flight in space. Performed at the Ontario Science Centre by the Amadeus Choir and the Elmer Iseler Singers, the breathtaking images of Bondar’s photographs combined with the ethereal voices of the two choirs and Bondar’s commentary left the audience stunned.

Yet another mixed media band event scheduled for the weekend just prior to the publication of this issue will be the Markham Concert Band’s “Godzilla Eats Las Vegas” where the band plays the accompaniment to a video presentation. Here again, the score is by avant-garde composer Eric Whitacre.

Something new in the local band world this year is the York University Community Band Festival scheduled for Saturday, May 5, 12pm to 9pm. This event is being organized by York University music graduate students with sponsorship by the York University Fine Arts Department, Yamaha and St. John’s Music. For information: auroracommunityband@gmail.com. Audience tickets are available online at www.yorku.ca/perform/boxoffice.htm.

As for the beginners’ bands, the ones we have heard from are doing just fine. The four New Horizons bands in Toronto will be together for a combined concert entitled “The Beat Goes On … and On” at the Glenn Gould Studio, 7:30pm, Thursday May 17. Resa’s Pieces will present their 13th Gala Concert at the George Weston Recital Hall, June 12, 8pm.

Finally, and unfortunately, I must report the passing of a lifelong supporter of community bands in Southern Ontario. William “Bill” Askew passed away in Oshawa just a few days shy of what would have been his 92nd birthday. During World War II Bill served as a musician with the RCAF in England. On his return to Canada he was active for the rest of his life as a gifted euphonium soloist in a number of bands. He was co-founder of the Encore Symphonic Band and a regular member until health problems forced his retirement. He was a long time member of the Oshawa Civic Band which performed at a service of remembrance on April 3.

This month’s lesser known musical term is Spritzicato: an indication to string players to produce a bright and bubbly sound. We invite submissions from readers. Let’s hear your daffynitions.