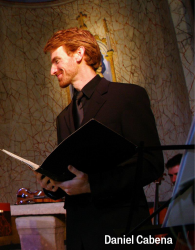 The countertenor voice had been prominent in English music in the late 17th century, the time of Purcell, but was only kept alive afterwards in the cathedral choirs. That changed in 1944 when the composer and conductor Michael Tippett plucked Alfred Deller from the choir stalls in Canterbury Cathedral and helped him to develop a solo career. Initially many people found the experience of hearing a man sing in the alto register odd. There is a famous story of Deller being confronted by a woman who asked him whether he was a eunuch. The story goes on to say that Deller did not miss a beat but replied immediately: “I think Madam the word you are looking for is ‘unique’.” Well, si non è vero, è ben trovato, but the very fact that the story rings true even if it isn’t, and has been repeated by many tells us something about the way audiences felt about this high male voice. Things have changed: now there are many countertenors and only the naive and inexperienced will be nonplussed by what they hear. The other day there was a very good countertenor, singing Schubert’s Ave Maria during the evening rush hour inside the Bloor-Yonge Station. Nobody seemed to take any notice (I suppose people had trains to catch) but nobody there seemed to find it at all unusual either.

Countertenor Daniel Cabena will be a new voice for many. I remember hearing him with the Toronto Consort and I was recently listening to the splendid recording by Les Violons du Roy and the Chapelle de Québec of the Mozart Requiem. Cabena sings on that recording too. In 2004 he moved to Montreal, where he studied at the Université de Montréal; since then he has been a student at the Schola Cantorum Basiliensis in Basel and has performed in Switzerland with Musica Fiorita and La Cetra and in France with the Concert Spirituel and Le Parlement de Musique. He recently returned to Canada and now lives in Guelph.

December and January are going to be busy months for him. On December 7 at 3pm he will be performing a free concert with the pianist Stephen Runge at Hart House. The countertenor voice is now largely associated with early music but Cabena has chosen late 19th and 20th century works, mainly British, for this recital: songs by Stanford, Vaughan Williams, Ireland, Finzi, Warlock, Quilter, Howells, Butterworth, Gurney, Britten and William Denis Browne. Of special interest are two songs by Barrie Cabena, Daniel’s father. The elder Cabena was born in Australia, studied in England with Herbert Howells, moved to Canada and taught at Wilfrid Laurier University in Waterloo from 1970 until his retirement.

On December 13 and 14 Daniel Cabena will sing in a concert of sacred music by Bach, with the Nota Bene Baroque Orchestra in Hamilton and Waterloo, respectively. On December 20 he will be the alto soloist in Messiah with the Guelph Chamber Choir at the River Run Centre, Guelph and on January 31 he will sing with the ensemble Scaramella in a program of 17th century German music at Victoria College Chapel.

Tenor Sean Clark is another busy singer. Fresh from his performance of Tamino in Ottawa’s Opera Lyra children’s version of The Magic Flute (set in space), he has begun rehearsals for another Mozart role, that of Don Ottavio in Against the Grain Theatre’s #UncleJohn, an adaptation of Don Giovanni at the Great Hall’s Black Box Theatre  December 11, 13, 15, 17 and 19). He is giving a recital of Canadian and American music that consists of Verlaine settings by Mathieu as well as folk-song arrangements by John Beckwith and John Jacob Niles at the Canadian Music Centre on December 13. He is also the tenor soloist in Pax Christi Chorale’s performance of Bach’s Nun kommt der Heiden Heiland as well as part of the Christmas Oratorio and in Stephanie Martin’s secular cantata Winter Nights at St. John Vianney Church in Barrie on December 5; Grace Church on-the-Hill on December 6 and 7. Clark has been a member of the Canadian Opera Company chorus for some time and is continuing in that role. But he is interested in developing a solo career and these concerts may mark an important stage in that development.

Miriam Khalil, soprano, and Julie Nesrallah, mezzo, are the singers in a concert of Arab music on December 4 at Koerner Hall.

Whitney O’Hearn, mezzo, and Bud Roach, tenor, will perform songs from the Irving Berlin songbook, with the Talisker Players at Trinity-St. Paul’s Centre, January 11 and, 13.

And beyond the GTA: Marie-Josée Lord, soprano, will perform songs and melodies from Spain and Latin America at All Saints’ Anglican Church in Peterborough, January 17.

Two Postscripts: I enjoyed Opera Atelier’s production of Handel’s Alcina. Most of it was very well sung and Allyson McHardy was spectacular in the role of Ruggiero. I wish though that the company had not advertised it as a Canadian premiere as there was a fully staged and very successful production of the work by the Opera School in the Faculty of Music at the University of Toronto in November 2002. This was with a modern orchestra but Essential Opera also performed the work with a chamber orchestra with period instruments in May 2012.

I have been reading with great pleasure the memoir of Mary Willan Mason, The Well-Tempered Listener: Growing Up with Musical Parents (Words Indeed, 2010). Mason is the daughter of Healey Willan, the composer, organist and choirmaster, and of Gladys (“Nell”) Hall, who had been a distinguished pianist and singer before her marriage. Mason is now 94 and retains a lively interest in musical events in the city. One of the many details in the book that struck me was an account of how during the Depression Evelyn Pamphilon “augmented her piano-teaching income by producing a pamphlet, What’s On, listing local concerts and recitals.” This was clearly a forerunner of The WholeNote. Do any copies survive, I wonder.

Hans de Groot is a concertgoer and active listener who also sings and plays the recorder. He can be contacted at artofsong@thehwolenote.com.