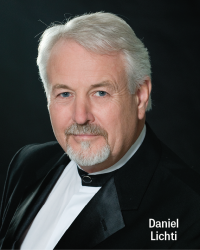 Schubert’s song cycle Die Winterreise has long been a favourite of mine, initially through recordings and then through a fine performance by the late John Shirley-Quirk in Oxford, sometime in the late 1960s. But there have been two other performances which have been especially memorable: one was by the young Jonas Kaufmann in Edinburgh, the other by Daniel Lichti at St. Thomas Church in Toronto, a much darker reading, as one would expect from a bass-baritone. (Lichti has also recorded the work, with the pianist Leslie De’Ath, on Analekta.) I was therefore delighted to read that Lichti is performing the work, on the occasion of his 40th anniversary as a singer, in Waterloo on July 16 at the Kitchener-Waterloo Chamber Music Society Music Room, and in Toronto on July 20 at Heliconian Hall. The pianist is Ephraim Laor.

Sondra Radvanovsky, who recently dazzled us all in the role of Queen Elizabeth I in Donizetti’s Roberto Devereux, will sing the Four Last Songs by Richard Strauss with the Toronto Symphony Orchestra, conducted by Shalom Bard, on June 5 and 7. The TSO is also presenting a Gershwin concert, with the Toronto Mendelssohn Choir, conducted by Bramwell Tovey, in which the soloists are Marquita Lister and Lisa Daltirus, soprano, Gwendolyn Brown, alto, Jermaine Smith, tenor, and Alfred Walker, baritone, on June 20 and 21; all at Roy Thomson Hall.

GTA: By June the frequency of concerts starts diminishing but there is a compensation in the arrival of several summer festivals. Of special interest is Toronto Summer Music. This year its focus is on the early 20th century and it will feature modernists like Schoenberg and Bartók as well as late-Romantic composers like Richard Strauss and Vaughan Williams. A number of the concerts offered are vocal recitals: on August 6, baritone Christopher Maltman and pianist Graham Johnson will present a concert commemorating the 100th anniversary of the Great War; the program, “The Soldier – from Severn to Somme,” will include some of the Housman settings by George Butterworth and others, as well as songs by Mahler, Mussorgsky, Ives and Poulenc. The August 7 concert includes the Schoenberg arrangement of Mahler’s Songs of a Wayfarer, to be sung by baritone Peter McGillivray. On July 31, Sondra Radvanovsky will perform songs by Verdi, Rachmaninoff, Copland and Duparc. The coaching of young performances has always been central to the programs of Toronto Summer Music. This year eight singers and four pianists have been selected; their mentors are Graham Johnson and the baritone François Le Roux. They will perform on August 8 at noon and 4pm. These concerts are all in Walter Hall, except for the Radvanovsky recital which is in Koerner Hall.

It is common now for singers to end their recitals with crossover items: jazz, musicals, even pop. The results are rarely satisfactory as one has the sense of a classical singer letting her (or his) hair down. But I expect something rather special from Measha Brueggergosman’s recital for the TD Toronto Jazz Festival on June 26. I had the good fortune of hearing Measha Gosman (as she then was) when she was still an undergraduate and what I remember especially were her performances of spirituals. I fully realize that jazz and spirituals are not the same thing but I think she will bring the same intensity to the jazz as she did to the spirituals many years ago. Another singer to hear at the Toronto Jazz Festival is the Spanish vocalist Maria Concepción Balboa Buika, better known by her stage name, Buika. That concert is on June 25; both concerts are at Koerner Hall.

Beyond the GTA: July 5 and 6, with a preview on July 4, the Westben Arts Festival Theatre in Campbellford will present the Toronto Masque Theatre production of Purcell’s Dido and Aeneaswith Lauren Segal, mezzo, as Dido and Alexander Dobson, baritone, as Aeneas; directed by Larry Beckwith. On July 10 Donna Bennett, soprano, and Brian Finley, piano, will perform works by Mozart, Robert and Clara Schumann, Chopin and Rachmaninoff. From July 23 to 26 there will be four concert performances of Andrew Lloyd Webber’s Phantom of the Opera with Mark DuBois and Donna Bennett singing the main parts. On July 27, sopranos Virginia Hatfield and Joni Henson and mezzo Megan Latham will perform the trio from Richard Strauss’ Der Rosenkavalier as well as music from The Tales of Hoffmann, Madama Butterfly and Carmen.

If you cannot get to Campbellford for Dido and Aeneas, you will have another chance to see it in Parry Sound at the Festival of the Sound on July 30. Lauren Segal is again singing Dido and Peter McGillivray is taking over the role of Aeneas. There will also be songs and instrumental music by Purcell. Also at the Festival of the Sound: Robert Pomakov, bass, will sing Mussorgsky’s Songs and Dances of Death on July 22; Richard and Lauren Margison will give a joint recital on July 27; Leslie Fagan, soprano, and Peter McGillivray, baritone, will sing a program of Schubert, Mendelssohn, Schumann and Brahms on August 1; on August 5 Tom Allen, Lori Gemmell, Kevin Fox, Patricia O’Callaghan and Bryce Kulak will perform in the “Judgement of Paris” – a neat pun, since the performance will be about the rivalry between two Parisian composers, Debussy and Ravel; the Festival will end on August 10 with a performance of Beethoven’s Ninth Symphony, in which the soloists are Leslie Fagan, soprano, Marion Newman, mezzo, Michael Colvin, tenor, and Russell Braun, baritone. These performances are all at the Charles W. Stockey Centre. Also at the Festival of the Sound: the Toronto Consort presents “Shakespeare’s Songbook” at St. Andrew’s Presbyterian Church, July 25.

Stratford Summer Music presents several concerts of music associated with Shakespeare, given by the Folger Shakespearean Consort (a recorder group) and the Consort Arcadia Viols. On July 23 “Courting Elizabeth: Music and Patronage in Shakespeare’s England” will present music by Dowland, lyra viol pieces by Tobias Hume as well as consort songs and lute ayres of Shakespeare’s time. The singer is the tenor James Taylor. On July 24 songs with texts by Shakespeare – or quoted by him – will be performed along with an operatic version of The Tempest as well as broadside ballads and country dances. The singer is the countertenor Drew Minter; the lutenist is Mark Rimple. Both concerts are in St. Andrew’s Church. In addition you can hear a discussion of  “An Examination of Shakespeare in Song” on July 24 at 2pm at the University of Waterloo, Stratford Campus with music by Thomas Morley, Robert Johnson and John Wilson. Minter and Rimple will again perform.

The Elora Festival includes the “Da Vinci Codex” with the Toronto Consort on July 15 and “Canada, Fall In! The Great War Remembered in Words, Images and Song” on July 19, both in St. John’s Church; the “Judgement of Paris,” July 18, Richard and Lauren Margison, July 19, “Songs from the Stage and Silver Screen,” July 23, and The Tenors, July 25; all at the Gambrel Barn.

And one other event: “Summer Nights: Languor and Longing” is the title of a recital to be given by soprano Melanie Conly and pianist Kathryn Tremills. The program includes Samuel Barber’s Knoxville, Summer of 1915 and Les nuits d’été by Berlioz as well as music by Purcell, Weill and Gershwin at the Heliconian Hall, June 19.