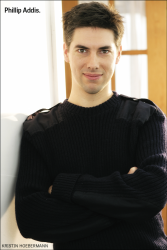 A number of well-known singers will perform in Toronto in December: on December 13 the tenor Marcello Giordani will sing arias and songs by Tosti, Bizet, Cilea and Puccini; on December 15 and 16 soprano Natalie Dessay will sing items from the Michel Legrand songbook; Richard Margison will perform “The Great Songs of Italy” on December 10 (all at Koerner Hall; there will be another performance of the Margison recital on December 7 in the Regent Theatre, Oshawa); on New Year’s Eve at Roy Thomson Hall “Bravissimo” will present a number of singers, including two Canadians (Wallis Giunta, mezzo, and James Westman, baritone). But the recital which I am most looking forward to is the one to be given by Phillip Addis, baritone, and Emily Hamper, piano, on December 19 at the Jane Mallett Theatre, St. Lawrence Centre. The main works on the program are Britten’s Songs and Proverbs of William Blake and Poulenc’s La fraîcheur et le feu. The program will also include Abendbilder by Wolf, two songs by Korngold and three new songs by Erik Ross.

Addis spent his high school years in Toronto. At that time he played the tuba and the euphonium. At one point he intended to become an engineer but at the last moment he decided that he would study music instead, a choice that we can all be grateful for. So he went to Queen’s, still intending to be a tuba player. But singing took over: after Queen’s, Addis studied for a diploma in operatic performance from the University of Toronto, which was followed by an apprenticeship at the Atelier lyrique de l’Opéra de Montréal. Since then he has sung many parts in many opera houses: he sang the high baritone role of Pelléas in Debussy’s Pelléas et Mélisande (at the London Proms last summer; under John Eliot Gardiner, no less); yet he has the lower sonorities which have allowed him to sing the title role in Mozart’s Don Giovanni. He is no stranger to lieder, having sung Schubert’s Winterreise and Schwanengesang, Schumann’s Dichterliebe and Mahler’s Lieder eines fahrenden Gesellen.

Last summer, after his performance as Pelléas, a reviewer wrote that he sounded “like a young Thomas Allen.” I asked Addis about that and his reply was both diplomatic and sensible. It was not, he said, a claim he would himself wish to make but, if others thought of him that way, then it was a compliment that he would try to live up to. I heard Allen a number of times when I was young (and Allen was even younger); the performance that I especially cherish is one that I saw and heard on a video, that of the title role in Britten’s Billy Budd. That is a role that Addis has not yet sung. It is a part that, for both dramatic and musical reasons, needs a young singer. I certainly hope that sometime in the near future Addis will be given the chance to sing it.

We saw Addis most recently in the COC production of Puccini’s La bohème, where he sang in all performances, some of the time as Marcello, in other performances as Schaunard. After that it was off to southern California, where he sang in Britten’s War Requiem and as the Sprecher in Mozart’s Die Zauberflöte and where on December 6 he will perform in Britten’s The Prodigal Son. After the Toronto recital he will travel to Paris, where he and Hamper will repeat the Toronto program and go on to sing Pelléas at the Opéra Comique. But what Addis is especially excited about is the production next July of Kevin Puts’ opera Silent Night, a work that dramatizes the brief Christmas truce during the first year of the First World War. The opera (first performed in St. Paul, Minnesota, in 2011) is based on the film Joyeux Nöel and Addis will be singing the role of the French lieutenant Audebert.

In the Toronto recital, Addis will be accompanied by Emily Hamper (we have in recent years trained ourselves to use the term “collaborative pianist,” but Hamper assures me that “accompanist” is good enough for her). She is also Addis’ wife and the mother of their young son Sebastian. As a vocal coach she is much in demand; she has worked with distinguished Canadian singers such as Gregory Dahl, Thomas Goerz, Roger Honeywell, Michael Schade, John Tessier — and, of course, Phillip Addis.

The return of Jennie Such: In an earlier column I wrote about singers who have retired and who have gone on to do other things. Among them was the soprano Jennie Such. Well, she is back. She is singing the first soprano part in a performance of Bach’s Magnificat along with the VOCA chorus of Toronto, conducted by Jenny Crober. The other soloists are Claire de Sévigné, soprano, Marion Newman, mezzo, Andrew Haji, tenor, and Alexander Dobson, baritone, at the Eastminster United Church, December 7.

Other events: JohnPizzarelli and Daniela Nardi will sing songs by Paolo Conte and Frank Sinatra at Koerner Hall, December 7.

At the Kingston Road United Church, December 8, Eve Rachel McLeod, soprano, and Jason Nedecky, baritone, are the soloists in a concert by the Toronto Beach Chorale, which will include music by Finzi, Holst and Vaughan Williams

There will be a chance to hear the winners of the Jim and Charlotte Norcop Prize in Song and the Gwendolyn Williams Koldofsky Prize in Accompanying on January 7 at Walter Hall.

Jennifer Enns Modolo, mezzo, and Bud Roach, tenor, will sing selections from the Cole Porter songbook, with the Talisker Players at Trinity-St. Paul’s Centre, January 12 and 14.

Last June Domoney Artists Management presented “The Star of Robbie Burns” consisting of songs by Burns as well as selections from the musical Brigadoon.There will be a repeat of this concert in the Church of the Redeemer on January 25. Benjamin Covey, baritone, will sing again but there is a different soprano (Charlotte Corwin), a different pianist (Christopher Bagan) and a different narrator (Andrew Gillies).

Stephanie Blythe is the John R. Stratton Visitor in Music at the Faculty of Music, University of Toronto. She will give an art song masterclass on January 21, a masterclass on opera arias on January 23 and will perform, along with voice and collaborative piano students, in “An Evening of English Song” on January 24. Also at Walter Hall there will be free performances featuring voice studies and collaborative piano students on December 3 and January 14. On February 3, Walter Hall is the venue for the distinguished baritone Sir Thomas Allen to give the Geiger-Torel lecture. Tracy Dahl will give the Ricky Turofsky masterclass in voice on February 7 in the Geiger-Torel Room.

And in Oshawa: At the College Park Church on December 8, Allyson McHardy, mezzo, will be the soloist in a concert of works by Bach, Handel and Vivaldi given by the Durham Philharmonic Choir.

Hans de Groot is a concert-goer and active listener, who also sings and plays the recorder. He can be contacted at artofsong@thewholenote.com.