There is, in ontario, a number of companies which have long histories: the Toronto Choral Society was founded in 1845, the Toronto Mendelssohn Choir in 1894, the Bach-Elgar Choir of Hamilton in 1905, the Toronto Symphony Orchestra in 1922, the Canadian Opera Company in 1950, the National Ballet of Canada in 1951. But there are, in Toronto and Southern Ontario, other more recently founded companies. 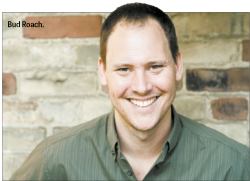 One such company is Capella Intima, founded and directed by Bud Roach. Roach decided to start this ensemble in 2008 and the initial performances were in 2009. Before Roach became a tenor, he was a professional oboist; he was a member of a number of orchestras including the Toledo Symphony Orchestra and the Buffalo Philharmonic. In his high school years he had been a rather weak baritone who conked out when confronted by a high F, so he put thoughts of singing aside in favour of the oboe. But in 2005, after having left the orchestral world, he discovered that he had high notes after all and from then on he has concentrated on singing. He managed to persuade Lydia Adams to allow him to sing in the Amadeus Choir’s performance of Bach’s Mass in B Minor. Adams must have liked what she heard and, soon after, Roach became a member of the Elmer Iseler Singers. We have also been able to hear him in appearances with ensembles such as the Toronto Consort and the Aradia Ensemble. He now enjoys an active solo career. At the Fringe concerts in last June’s Boston Early Music Festival he performed excerpts from the third volume of arias by Alessandro Grandi (1626), accompanying himself on the baroque guitar. These performances are now also available on CD (on the Opera Omnia label).

Capella Intima specializes in the performance of 17th-century Italian sacred works, sung one to a part with a small instrumental ensemble. Last spring it gave three performances of the oratorio Giuseppe, which may or may not be by Luigi Rossi. This September Capella Intima will perform music by Chiara Margarita Cozzolani (September 21 in Hamilton at McNeil Baptist Church; September 28 in Toronto in the Great Hall at St. Paul’s Anglican Church on Bloor St.; both at 3pm) in a program titled “Celestial Sirens” which the ensemble first presented in 2010 and has since performed at the New Hamburg Live Festival and, most recently, at the Bach Festival of Canada in Exeter. (Another concert, also titled “Celestial Sirens” and featuring music by Cozzolani and others, was given by the Toronto Consort in May 2011.) It is only in recent years that the music composed by 17th-century cloistered Milanese nuns, like Cozzolani, has been given the attention it deserves by both musicologists and performers. I am myself greatly looking forward to this concert.

The other comparatively new company is the Toronto Masque Theatre, directed by Larry Beckwith, now entering its tenth anniversary year. When I first knew Beckwith, he was primarily a tenor (he was a member of the Tafelmusik Chamber Choir). As time went by, he became more interested in playing the baroque violin and performing chamber music. Before founding the Toronto Masque Theatre, he was a member of the Arbor Oak Trio along with Stephanie Martin, harpsichord, and Todd Gilman, viola da gamba (replaced by Mary-Katherine Finch after Gilman left Toronto). The Trio did not confine itself to chamber music but also staged several 17th- and 18th-century operas, including Love in a Village by Thomas Arne and John Gay’s ballad opera, The Beggar’s Opera. (I played the Beggar in the latter. Can I call it the title role?)

Literary historians tend to define “masque” rather narrowly and see it as a 16th- or 17th-century courtly entertainment with strong allegorical elements. Beckwith has always thought of the masque in a much wider sense, as a work that provides a fusion between opera, dance, song, chamber music, theatre, puppetry, visual art and film. The company has performed several 17th-century operas such as Purcell’s Dido and Aeneas and John Blow’s Venus and Adonis but it has also commissioned a number of new works by composers like James Rolfe and Dean Burry. Its most recent commission was The Lesson of Da Ji (music by Alice Ping Yee Ho, text by Marjorie Chan), which won a Dora Mavor Moore award.

The first TMT event of the new season is a ten-year retrospective salon on September 30 at 21 Shaftesbury Ave. Beckwith and others will speak and there will be musical contributions by, among others, soprano Teri Dunn and lutenist Lucas Harris. Tickets for a suggested donation of $20 are bookable through the TMT website or by phoning 416-410-4561. Their first regular concert will give us Patrick Garland’s dramatization of Brief Lives by John Aubrey with actor William Webster and soprano Katherine Hill at the Young Centre, October 25 to 27. It will be followed by the cabaret Arlecchino Allegro featuring mezzo Laura Pudwell at the Enoch Turner Schoolhouse, January 23 to 25. The final concert on April 25 and 26 at Trinity-St. Paul’s Centre, will give us three versions of the myth of Zeus and Europa; the soprano soloist will be Suzie LeBlanc.

On September 26 at the Richard Bradshaw Amphitheatre, in a free noon hour concert, the young artists of the 2013/14 Canadian Opera Company Ensemble will introduce themselves by singing their favourite arias.

The season at Koerner Hall will open with a concert on September 28 featuring Audra McDonald. She will sing a mix of Broadway show tunes, classic songs from movies and pieces specially written for her.

Soundstreams opens its season at Koerner Hall on October 1 with a concert devoted to the music of Arvo Pärt, James Rolfe and Riho Maimets. Shannon Mercer will be the soprano soloist.

The opening concert of the Recitals at Rosedale series will be on October 6 at 2:30pm at the Rosedale Presbyterian Church. Its title is “The Seven Virtues” — the series will pair that concert with “The Seven Deadly Sins,” but not until May.

And beyond the GTA

The Colours of Music Festival in Barrie will include “A Song in the Air” on October 3, including music by Mozart, Mendelssohn, Brahms and Britten sung by mezzo Jennifer Krabbe and baritone David Roth. “I’ll Be Seeing You” on October 6 features songs from wartime, sung by Wendy Nielsen, soprano, and Patrick Raftery, tenor. Both concerts will be at Burton Avenue United Church.

Hans de Groot is a concert-goer and active listener
who also sings and plays the recorder. He can
be contacted at artofsong@thewholenote.com.