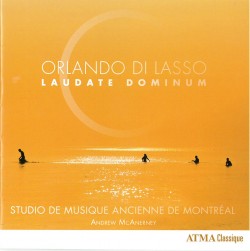 Orlando di Lasso is generally considered to be one of the last and one of the finest composers of the Franco-Flemish school, a school (if that is the right word) that begins with Dufay and includes several great composers: Ockeghem and Josquin, de la Rue and Isaac. The forms that di Lasso’s motets take are often complex. Of the 13 on this disc none are in the standard four parts: six are for double choir (with eight, nine or ten voices), one is 12-part, one ten-part, one eight-part, one seven-part and one six-part. The organization within these parts also tends to be complex. In the six-part Te Deum the odd-numbered parts are plainchant and the even-numbered polyphonic. Omnia tempus habent sets the presentation of youth against old age by having a high voice choir of four sing the former and another four-voice choir, of low voices, sing the latter.

The Studio de musique ancienne de Montréal was founded in 1974 by Christopher Jackson and has, since Jackson’s recent death, been directed by Andrew McAnerney. On this record the choir consists of 13 singers who perform a cappella. This is challenging music, for the listener and the performer alike. The singing is glorious and the disc is strongly recommended.