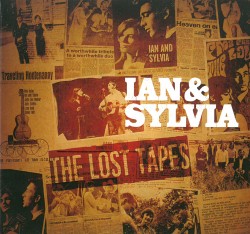 Thank goodness for downsizing! Because that’s what Sylvia Tyson was doing – that, and gathering archival materials for Calgary’s National Music Centre – when she discovered, in her front hall cedar chest, a long-forgotten treasure trove of recorded-live-in-studio, Ian & Sylvia performance tapes from the early 70s. And thank goodness Tyson wisely asked some of the best ears in the business, i.e., Danny Greenspoon (an accomplished musician, himself) to produce and edit (once the 1/4-inch analogue tapes were digitized) Ian & Sylvia The Lost Tapes. Because the results are masterful!

To be clear, this is not so much a review as it is an homage to these pioneering Canadian icons of folk and country music, who helped pave the way for the likes of Gordon Lightfoot and Joni Mitchell. I mean, who the heck is going to “review” Ian & Sylvia singing Four Strong Winds, Summer Wages, Keep on the Sunny Side or When First Unto This Country, four of the 13 best-known and beloved classics appearing on disc one of the double album?

What’s exciting for this 60-year-old folkie-at-heart is the selection of previously unreleased performances on disc two. Irresistible are the covers of Sweet Dreams, Jimmie’s Texas Blues, The Last Thing On My Mind and Together Again.

Ian & Sylvia met 60 years ago. Last week they were both inducted, separately, into the Canadian Songwriters Hall of Fame. Ian & Sylvia The Lost Tapes is a heart-warming reminder of why their music still holds up. 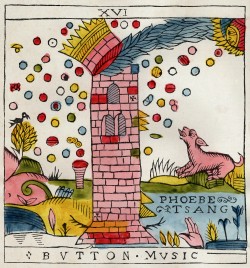 Two multi-movement works are featured. Unbutton is a six-part journey into the challenge of losing a button. Love the attention-grabbing No.1, opening with staccato echoing repeated notes on violin and a vocal on the word “button”, just like the popping sound of losing a coat button. Touches of Romantic-style sad tonalities surface in No.2. A nod to folk music in No.3 with a party mood jig-quality violin part until the abrupt vocal/violin stop. No.4 presents Tsang at her very best as atonal violin lines coupled with emotive held-note vocalizations create a unique personal sound. Use of the familiar song lyric line “Button up Your Overcoat” in No. 5 creates a toe-tapping musical theatre song quality complete with extended violin solo with numerous effects. No.6 is performed with perfect phrasing, tonal quality, sad mood and a building musical tension.

The theatrical three-movement Cards from the Tarot de Marseille features a tight ensemble feel created by one performer in King of Cups. Creepy spoken words supported by a high-pitched violin sets the spooky mood of The Hermit. Tsang shows off her violin virtuosity in Le Pape with fast lines and a repeated note marching effect. 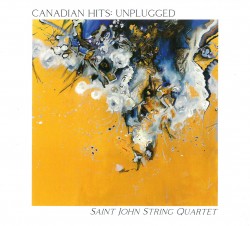 Here is another innovative recording by the New Brunswick-based St. John String Quartet, one that recasts well-known Canadian songs in adept string arrangements by Rebecca Pellett. These songs are familiar to us with vocals plus the reverberant long-decaying tones of guitars, bass, pedaled piano and added studio production. So it is an arranger’s challenge to create satisfying textures with only four bowed instruments! Lots of pizzicato is one way to sustain the background, as in the arrangement of Francis by Béatrice Martin (Coeur de pirate). Evoking the simple group vocal sound of Stan Rogers’ Northwest Passage is another way. Percussive effects on the string instruments add equivalent interest and authenticity to Knocking at the Door (Arkells) and the heavy slog of Spring to Come (Digging Roots). The latter’s humour is topped by a tastefully tongue-in cheek Miss Chatelaine (k.d. lang) in tango rhythm with amusing string slides, all dissolving into fairy dust at the end…

But the true elixir of this disc’s arranging by under-billed Pellett is in the eloquence of River (Joni Mitchell) and the Celtic sound of If You Could Read My Mind (Gordon Lightfoot). And leader/violinist David Adams, violinist Danielle Sametz, violist Christopher Buckley and cellist Sonja Adams certainly surpass the mere “unplugged hits” world here! A sound world bathed in long non-vibrato tones, harmonics and emotionally text-conscious melody-playing, here seems to be an ideal realized by players and arranger alike.

Listen to 'Canadian Hits: Unplugged' Now in the Listening Room 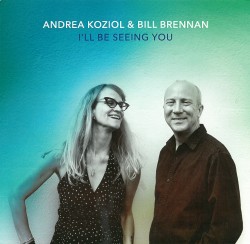 I’ll Be Seeing You, a sharp selection from the jazz songbook, features Toronto vocalist Andrea Koziol and Newfoundland pianist Bill Brennan. They cover 13 of some of the best-known standards – sprinkled with their own songs – with nimble interpretative panache and sure musical taste. Toronto A-lister-musicians Andrew Downing on bass and cello and guitarist Joel Schwartz provide a firm foundation, plus a sympathetic harmonic and melodic framework.

Koziol’s interpretations are assured and tone perfect. I was stuck by her attentiveness to the lyrical meaning of the intro verse in older songs like Fly Me to the Moon. In Stevie Wonder’s strutting funky Tell Me Something Good she purrs, growls and ghosts her tone in several amazing ways. Is she perhaps channeling her inner Chaka Khan?

Koziol and Brennan generously share the musical spotlight, reminding us that their friendship reaches back several decades. That generosity of spirit extends to Schwartz. He gets a lovely sustained-tone lyrical electric guitar solo in Randy Newman’s moody, thoughtful ballad I Think It’s Going to Rain Today.

I’ll Be Seeing You launched with concerts in Ontario and Newfoundland this summer. Judging from the glow emanating from this album I look forward to hearing Koziol and Brennan live in the near future. 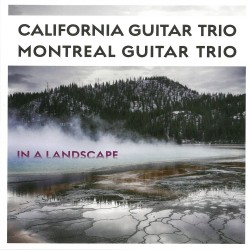 Among small chamber groups, the combination of two, three or even four guitars is not all that uncommon. So what about six guitars? Surely a guitar sextet is a little out of the ordinary, yet that’s what we have here on this disc, titled In a Landscape, featuring the combined forces of the California and Montreal Guitar Trios. While both ensembles have long-established reputations in their own right, the decision to perform together as a single group evolved from a chance meeting at an Oregon music conference ten years ago and since then, they haven’t looked back.

Just as the combination of six guitars may be a little unusual, so is the music they present on this recording. Indeed, the musicians have always shared a determination to “push the boundaries” with respect to repertoire, and this philosophy is evident in the all-too-brief 40-minute program.

Opening with the rhythmic New Horizons by MGT member Glenn Lévesque, it’s clear that these musicians enjoy playing together – what a warm and satisfying sound they produce! Flashy virtuosity for its own sake is decidedly absent – instead what we hear is sensitive and well-crafted interplay among the performers. Furthermore, the eclectic program is a remarkable study in contrasts. Arrangements of Radiohead’s Weird Fishes and David Bowie’s Space Oddity with vocals by ensemble members are juxtaposed with the moody and mysterious title track by John Cage (as arranged by Sébastien Dufour) while the mercurial Magneto – composed by Dufour – is an infectious essay in Latino brilliance.

For such a comparatively short program, In a Landscape covers a lot of ground, and does so with solid musicianship – mixed with some good-natured humour – throughout. This CD is an attractive landscape indeed, one that leaves the listener wanting more.

Listen to 'In a Landscape' Now in the Listening Room 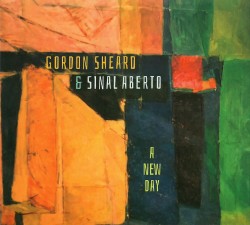