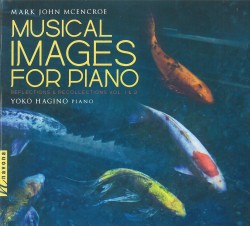 Musical Images for Piano (Navona NV6144 navonarecords.com) is a two-disc set of works by Australian composer Mark John McEnroe, performed by pianist Yoko Hagino. The set is subtitled “Reflections & Recollections Vol. 1 & 2” and is written in an introspective mood. McEnroe’s style shows, at least in these works, the strong influence of Debussy and Satie. In his liner notes, McEnroe describes a desire to capture the increasingly reflective moments that occur in later life. He draws further similarities between Monet’s inspiring gardens and his own as a stimulus for this collection.

The French impressionist style is a perfect vehicle for what McEnroe sets out to achieve. Serenity is the immediate feeling conveyed in this music, although the composer also ventures very effectively into dark corners for variety and balance. This well-planned tension and release is occasionally punctuated by touches of humour with pieces like A Fish with the Blues. Jazzy harmonies recur through the set, giving an eclectic sound to McEnroe’s voice.

He writes with a strong affinity for melodic line and this feature has attracted a number of orchestrations of his piano works, resulting in subsequent recordings by several European orchestras.