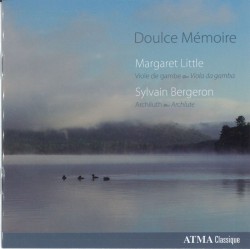 This CD explores the variation technique known as “diminutions,” a concept more commonly known as “divisions.” It is explained in the accompanying booklet: “Diminutions were made by dividing long notes of the melody into a series of shorter notes either surrounding the melody note or filling up the interval between it and the next melody note.” Many of these were based on madrigals, most famously Cipriano de Rore’s Ancor che col partire. Here the artists have chosen one set of variations, that by Ricardo Rogniono. The title of the CD refers to a different madrigal, Doulce Mémoire, by Pierre Sandrin. Here three sets of variations are played: by François de Layolle, Diego Ortiz and Vincenzo Bonizzi.

Although there are only two players, the recital gives us many different textures: of the 17 tracks, seven are for treble viol and archlute, six for bass viol and archlute, two for solo treble viol and two for solo archlute. The material is largely based on variations on 16th century madrigals, but it is complemented by selections from John Playford’s 1684 collection The Division Viol with its variations on popular English songs. No selection of variations would be even half complete without that most popular of songs, La Folia. Fittingly the CD ends with an anonymous set of variations based on that song.

Throughout the CD viol player Margaret Little and lutenist Sylvain Bergeron, are superb. I am always careful not to use superlatives too easily but these performances are truly out of this world.