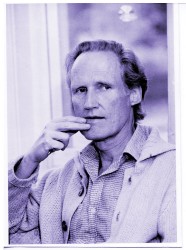 Harry Somers was a man who was always noticed. He had a presence that would fill a room: whatever room he entered, large or small. He had an enormous intellect and potent creativity, and a physical frame and a big, resonant voice to match. And his composer’s voice was and continues to be more than noticeable: it knocks you over with the force and beauty of its sound and its message. He died in 1999, but like all great composers, Harry remains with us, living in his music.

The release of a Centrediscs DVD of the historic CBC Television production of Harry Somers, Mavor Moore and Jean Languirand’s opera Louis Riel, together with another CD volume of Somers’ orchestral works, gives us an occasion to look back and to remember Harry Somers. It more or less completes, at least for now, the Canadian Music Centre’s Window on Somers project. There has never been a project on this scale to document the music of a Canadian composer; it embraces 12 volumes of CDs (several of them multiple-disc sets), and now its first DVD.

Harry was, for me, both a colleague and a friend. He was a respected composer, a creative powerhouse who could astound us with his bold new ideas and the brilliant scores that embodied them. And he was also a fellow musician who would easily and happily lend an ear to whatever topic we might wish to chat about. Harry loved big, ambitious projects and he also liked to have fun. It’s been 12 years since he died, and I still miss him.

His voice was as strong as it was diverse and multi-faceted. Over the span of his more than 100 works there are monumental creations, such as the operas Louis Riel and Mario and the Magician, and there are miniatures and other small-scale pieces like the choral works Gloria and The Wonder Song. There are chamber works such as the four string quartets and five piano sonatas, and there are media compositions such as Images of Canada and Absract for Television. And there are numerous works that defy classification, like Chura-churum for voices, instruments and electronics, and Zen, Yeats and Emily Dickinson for actors, singers and instruments. His is a compositional voice that has such range that it can at various times express itself via romantic, neo-baroque, indeterminate, interactive, graphic, polyspatial, polytemporal and other advanced means. In all cases, though, it remains distinctly and characteristically Harry’s voice. That unique, noble, glorious, sacred and profane voice that was and is Harry Somers’.

Over the course of the last 12 years Harry’s widow Barbara Chilcott and his friend Robert Cram have, with the help of many supporters, spun out a long series of recordings and other projects known as A Window on Somers. I was lucky enough to have been the person selected to produce the CDs. There are 12 volumes of CDs on the Centrediscs label, plus a few extra discs originally released as CBC Records but now distributed by the Canadian Music Centre. These recordings collect together a majority, although not yet all of Harry’s musical output. The performances are by musicians whom Harry knew and with whom he chose to work while he was alive. The underlying artistic policy embraced by Barbara and Robert throughout the project was, “just work with the best possible talent – the results will speak for themselves.”

The performances and recordings are made with great skill and superb musicianship, coupled with the affection these artists shared with Harry. The artistic achievement of A Window on Somers is one to be proud of. And it gives us all that unique possession: Harry’s music.

Of course, we would have traded all of this just to have Harry back. His passing at 73 years was, needless to say, premature. He still had so much to say. I bloody well do still miss him. But he gave us a pretty great ride, and inestimable musical riches, along the way. This moment in Canadian musical history is something of a milestone. And we all thank Harry for that.

David Jaeger is a broadcaster, composer, senior music producer at CBC Radio 2 and friend of the late Harry Somers.